You’re not seeing things – Iowa’s farm fields really are turning green earlier in the spring than they used to, thanks to cover crops!

Iowa’s farmers have been taking on the challenge of improving Iowa’s water quality for decades. A 2015 Iowa State University survey shows that Iowa farmers invested as much as $2.2 billion in conservation over the previous 10 years. It’s why Iowa ranks first nationally in acres of grassy buffer strips to protect waterways from runoff and why the state has roughly 90,000 miles of grassy terraces (enough to go around the Earth three and a half times) to prevent erosion and runoff. With the help of buffer strips, terraces, and a variety of other longstanding conservation practices, Iowa farmers have reduced phosphorus losses from fields by 22 percent (since a baseline period that includes the early 1980s through the mid-1990s).

But cover crops are relatively new to most of Iowa’s landscape, so (naturally) Iowans have lots of questions. We’ve answered some of the most commonly Googled questions about cover crops with help from some Iowa experts:

What are cover crops?

“Cover crops are simply something we’re typically seeding after our cash crop [e.g. corn or soybeans],” says Deputy Secretary of Agriculture Julie Kenney, who farms in central Iowa. “This is something we would plant not with the intention of selling it as a commodity, but for the benefits that it can bring to the field and the environment.”

In other words, Iowa farmers plant cover crops for the benefits they provide after the corn and soybeans are harvested and before the following year’s cash crop is planted. These benefits include reducing erosion (which protects nearby rivers and streams from soil and phosphorus runoff), absorbing nitrates that are in the soil (which helps keep nitrates out of nearby rivers and streams), improving soil health (by increasing organic matter and improving soil tilth, porosity and infiltration), and helping suppress weeds in fields.

Winter cereal rye is the most common cover crop species in Iowa.

“Cereal rye is the most popular species in Iowa because it can be planted late into the fall and endures the winter well,” says Sarah Carlson of Practical Farmers of Iowa.

“Cereal rye makes up about 90 percent of the cover crops in Iowa,” says Mark Licht of ISU Extension. “Oats make up 21 percent, radishes and turnips make up 20 percent, wheat makes up 15 percent, and 16 percent is other varieties like hairy vetch, clover, winter pea, cowpea, rapeseed, triticale, mustard, and annual ryegrass. The percentages add up to greater than 100 percent because some farmers mix various species together into diverse mixes.

“The advantage with winter cereal rye is that you get good growth in the fall, especially if you get it established in a timely fashion, and then you get the spring growth with it. With oats, you have to get them planted really early to get the fall growth, but they won’t survive the winter.”

How do cover crops prevent soil erosion and prevent nitrates from reaching our water?

Cover crops prevent soil erosion by improving soil structure and permeability (so that water can seep into the ground more easily, rather than run off the top) and covering the ground (a physical barrier between raindrops and the bare ground). Reducing soil erosion also helps prevent phosphorus runoff.

Cover crops prevent nitrates from reaching nearby streams and rivers by scavenging and holding onto nitrates in the soil – during times when corn, soybeans and other cash crops aren’t growing.

According to Iowa’s Nutrient Reduction Strategy (a collaborative, research-based plan developed by researchers at Iowa State University, the Iowa Department of Agriculture and Land Stewardship, and the Iowa Department of Natural Resources), cover crops like rye and oats can prevent, on average, 28 – 31 percent of nitrates and 29 percent of phosphorus from reaching our water.

How many acres of cover crops do we have in Iowa?

A decade ago, Iowa farmers were planting fewer than 10,000 acres of cover crops per year. 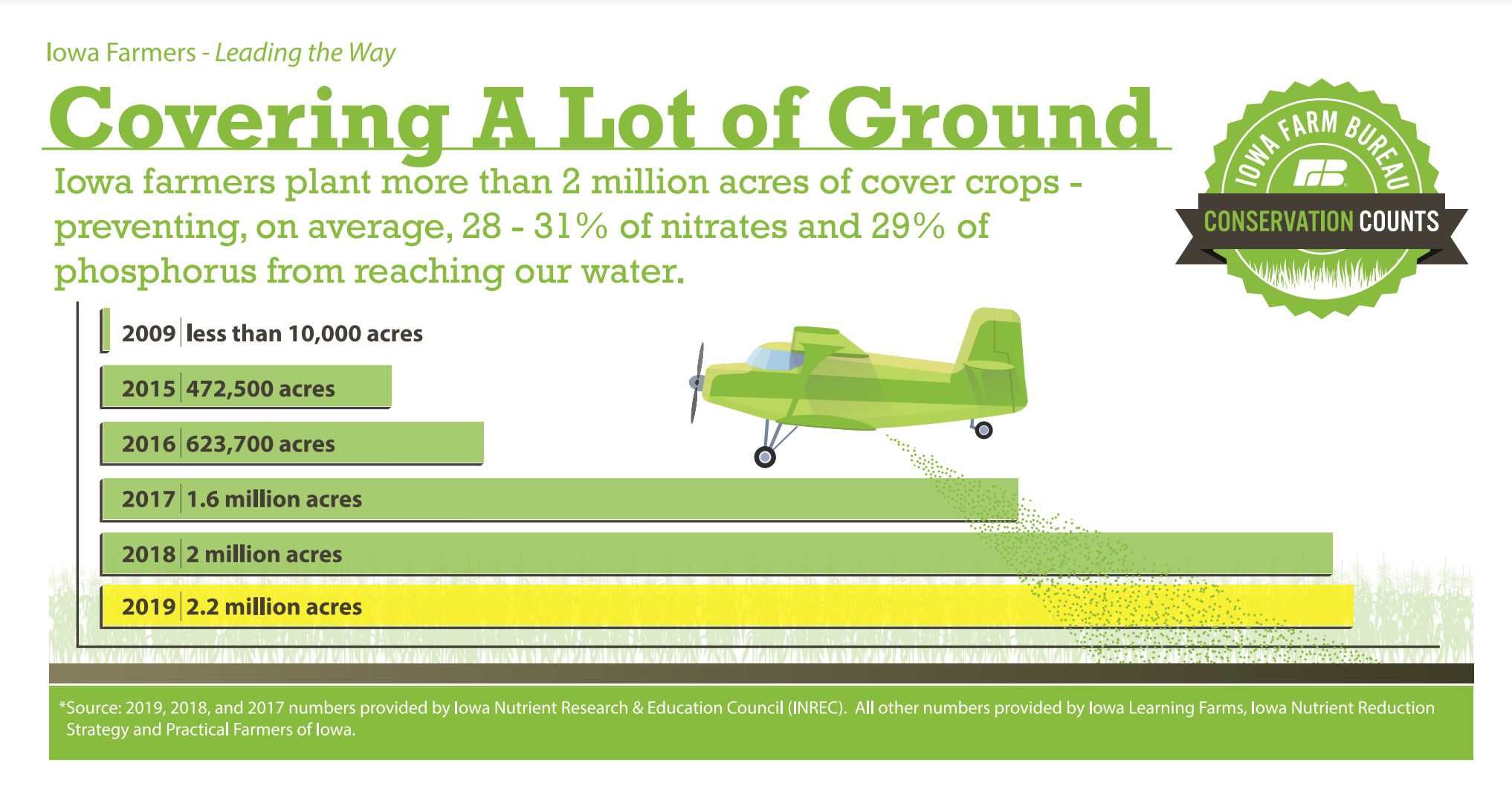 When are cover crops planted?

Farmers try to plant their cover crops as early as possible in the fall, without interfering with their cash crops (e.g. corn and soybeans).

However, planting cover crops too early can make it difficult for them to get established, says Carlson. If cover crops are planted too soon (i.e. too many days before the corn and soybeans are harvested), the “canopy” from standing corn or soybeans will block the cover crops’ access to sunlight and stifle their growth.

“There is a weather influence on this obviously, but we generally say the last week of August to the first week of September is a good time to get the cover crop seeded,” says Licht. “That generally means we’re either aerial seeding or overseeding that cover crop. But we say that’s the best timeframe because that’s about the time the cash crop is generally starting to mature, and that allows us to get the cover crop germinated and emerged and get some good growth in the fall.”

Other farmers “chase the combine” to plant their cover crops, says Carlson – seeding their cover crops (using a wide variety of equipment, including grain drills) right after the corn and soybean harvest (which typically starts around mid-September).

The window for seeding cover crops in the fall depends heavily on the corn and soybean harvest window, the weather and the type of cover crop that’s being planted.

While cover crops aren’t “harvested” like corn or soybeans, farmers will terminate cover crops like cereal rye in the early spring, usually with a herbicide, so that the cover crops don’t compete with the newly-planted corn and soybeans. Some cover crops (like oats) are killed by the winter and typically don’t re-emerge in the spring, so they don’t need to be sprayed.

When it comes to corn, USDA’s “general recommendation” is to terminate a cover crop 10 – 14 days ahead of corn planting and Licht advocates for 14 days, noting that “there is more risk with corn production following an overwintering cereal grain. Terminating the cover crop earlier should help with this risk, especially for farmers who have zero to three years of experience with cover crops.”

In 2020, leading scientists and technical specialists from ISU, USDA, and other organizations released a manual (called the " Whole Farm Conservation Best Practices Manual"), with consensus recommendations for farmers who are managing their conservation practices, including cover crops.

Are there economic benefits of cover crops?

Farmers utilize a wide range of conservation practices (terraces, buffer strips, no-till, bioreactors, saturated buffers, restored wetlands, applying fertilizer using precision technology, and much more) to protect soil and water. There’s not one “silver bullet” conservation practice, including cover crops, that works best for every farmer. Farmers select the practices that work best for their farms from an environmental perspective and after weighing the short- and long-term economic benefits and costs.

From an economic perspective, farmers consider short- and long-term benefits and costs of cover crops, like these:

A 2018 Iowa State University (ISU) study of the annual net returns of cover crops found substantial variability in net returns, driven by the costs of planting and terminating cover crops, feed cost savings from grazing cover crops, cost-share program payments, and the difference in yields obtained in fields with and without cover crops.

“Cost-share payments are a critical incentive to support the practice of cover crops,” says study administrator and assistant professor of economics and extension specialist at ISU Alejandro Plastina. “But we found that for most farmers, these payments are insufficient to cover all costs associated with cover crops.”

Plastina acknowledges that the survey does not account for long-term soil and water quality benefits because “no market value exists for soil health or water quality, and neither does a generally accepted method to value them.”

According to Carlson, well-managed cover crops (i.e. cover crops that are terminated at the appropriate time in the spring) typically won’t impact the yield of upcoming corn and soybeans. In fact, Carlson points to a study showing that soybeans planted after a rye cover crop can see a yield increase, along with improved weed control. However, she does caution that cover crops can take time to master.

“For cover crop beginners, I’d recommend starting with 80-acres of cereal rye, in a field that’s going to be spring no-till soybeans,” says Carlson. “It will help with weed control and give beginners their best shot at a positive first experience with cover crops.”

“The easy answer is to start with soybeans,” agrees Licht. “Soybeans following a cover crop – rarely do we see a yield loss. Most of the time, they’re yield neutral. Some of the time they can be yield positive.” Some studies indicate that farmers planting soybeans after cover crops can see positive yields immediately. Other studies indicate that it takes multiple years for farmers to see a positive impact on soybean yields.

Can you eat cover crops?

Technically, you could, but you wouldn’t. This is an understandable question, especially since farmers sometimes plant things like radishes and turnips as cover crops. Humans don’t eat cover crops (which aren’t bred or intended for food-grade human consumption), but ruminant livestock (cattle and sheep) can.

“We can’t forget another really significant benefit of cover crops is the potential for grazing,” says Deputy Secretary of Agriculture Julie Kenney. “Livestock producers can put up fence and use those cover crops to graze their livestock, and it’s just another added benefit to those cover crops. In addition to the reduced soil erosion and reducing the nutrient losses, they’ve got a feedstock for that livestock, which has proven to be really, really beneficial for them. So, we’re not going to eat them as humans, but livestock do and, frankly, really like them.”

Where can Iowa farmers look for more information about cover crops and cost share assistance?

The " Whole Farm Conservation Best Practices Manual" was released in 2020. It features the consensus recommendations on managing cover crops and other conservation practices, from leading scientists and technical experts at ISU, USDA, and other organizations.

Additionally, farmers can learn about cover crops by attending local field days and other educational events throughout the year.