Why is more water being treated by utilities?

My husband laughs at my skeptical nature. In today’s world of misinformation and polarization, it’s hard for me to take things at face value. If you’re like me, you probably read something, question it and try to take in as much information as you can to reach a well-reasoned conclusion. I wish I could be more trustful, but I’ve seen too many examples of no-nonsense Iowans like me purposefully being misled.

Something certainly didn’t add up last week when I noticed two different tweets within days of each other from the Des Moines Water Works about their summer watering schedule. A watering schedule is not something new—as noted by their first tweet. It is a practice the metro has implemented for years to conserve water during extremely hot months. We don’t water our lawn at home, but if you’re going to, it makes sense to be responsible about it. But I certainly raised an eyebrow when two days later, they tried to claim this already-in-place watering schedule was due to nitrates.

I can’t tell you why a practice that was commonplace to encourage people to reduce water usage during periods of peak heat is now being spun as a finger-pointing campaign. What I can tell you is, according to United States Geological Survey data, nitrates in the Raccoon and Des Moines Rivers have been on a downtrend since 2014. More specifically, nitrate levels are 77% lower in the Raccoon River and 83% lower in the Des Moines River. 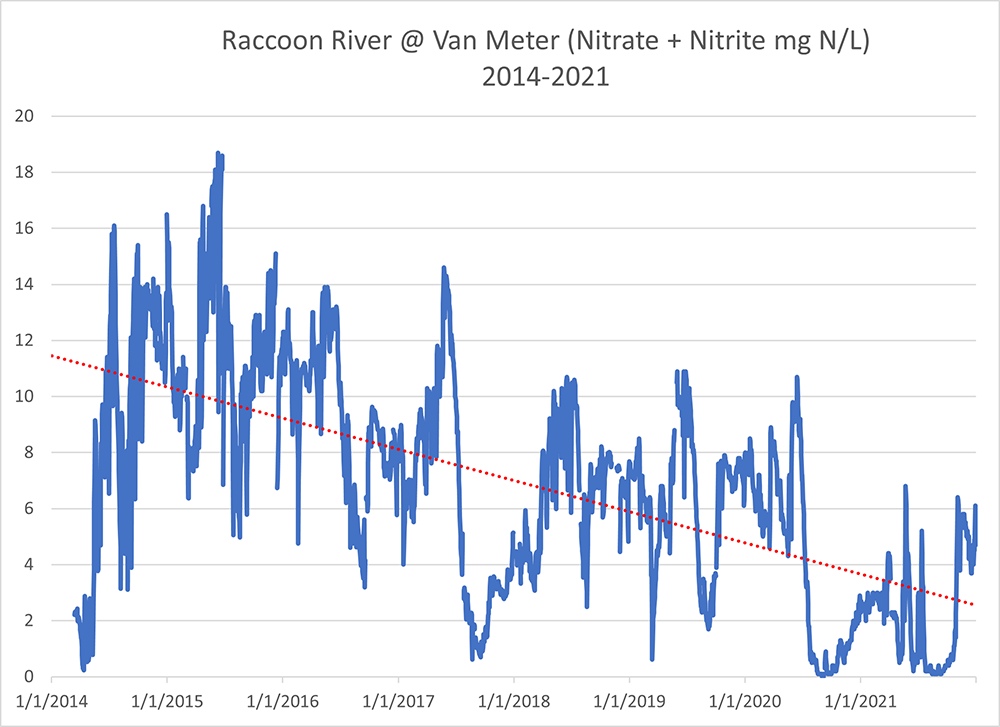 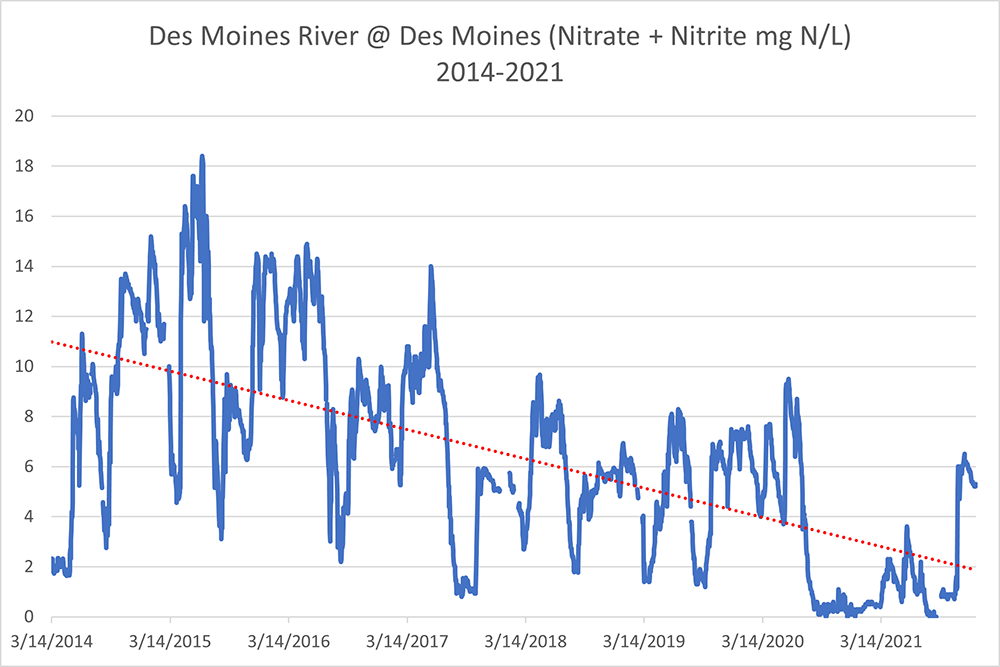 Through statewide collaboration and advancements in technology to improve water quality, progress is happening. Consider cover crops, which hold nutrients and soil in place over the winter months. In 2009, less than 10,000 of Iowa’s corn and soybean acres were planted to cover crops. In 2020, 3.1 million acres were protected by these plants. Additionally, 40 saturated buffers, 11 bioreactors and 40 wetlands are set to be installed in the Des Moines and Raccoon River watershed through farmer and state-led partnerships. These practices reduce nitrates entering our waterway by more than 50% (and in the case of wetlands, enhance wildlife habitats).

Does this mean that nitrate spikes don’t occur? Of course not, especially coming off a drought year into wet weather conditions, says Shawn Richmond, an environmental scientist with Iowa Farm Bureau. However, it’s important to look at long-term trends to see a clearer picture of the work Iowa farmers are doing in-field and edge-of-field to protect Iowa’s water quality.

(Think of it like this— as we begin to eat healthier, the scale will likely show continual weight loss. However, after a night of fast food with friends, we could see that number temporarily spike when we step on the scale the next day. Does that mean that progress isn’t happening? Or, do we understand, as reasonable people, today’s number is an outlier?)

Not all nitrogen loss comes from fertilizer application, says Richmond. Research from Iowa State University shows Iowa’s rich, fertile soils so conducive to growing healthy crops naturally contain 10,000 pounds of nitrogen per acre. What Iowa farmers apply to their farm fields to help maintain fertility and promote organic matter is roughly 1 to 2% of the total nitrogen in Iowa’s farm fields.

Through precision agriculture, farmers are using new tools to better match a crop’s needs and the timing of that need to reduce nitrogen loss. By soil sampling across a field, a farmer can get a detailed “prescription” of what areas of their field need more or less fertilizer. This prescribed map is then used to tell a fertilizer knifer (a piece of equipment that injects nitrogen below the soil surface) the precise amounts that need to be injected at specific locations across the field. If nitrogen attempts to leave the field, the conservation practices mentioned earlier help serve as a filter to capture that loss before it reaches a stream.

So, if overall trends are declining, why is more water being treated?

Maybe you’ve seen stories that metro areas like Waukee and Ankeny are ranked some of the fastest growing cities in the United States. The entire Des Moines area is booming per 2020 Census Data and growing faster than other Midwestern metros like Chicago, Kansas City and Minneapolis. Naturally, this means more water utility customers.

What isn’t understandable is trying to purposefully mislead people. Do we have water quality challenges in our state? Yes, but to see the whole picture we need to understand where we’ve been, where we are now and where we are heading. As both farmers and urban dwellers continue to conserve and appreciate our state’s natural resources, we’ll keep heading in the right direction. At least, that’s my conclusion, with a better picture of all perspectives laid out before me.