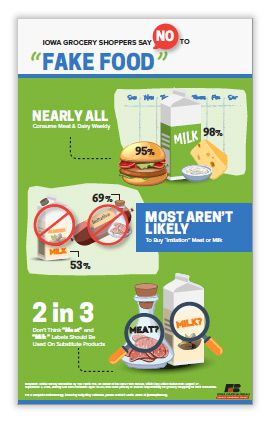 The majority of Iowa grocery shoppers regularly eat pork, beef, turkey, chicken, eggs and dairy and do not feel marketers of imitation products should be able to use the words “milk” or “meat” on their labels, according to the latest Iowa Farm Bureau Food and Farm Index®. In fact, only a minority of Iowa grocery shoppers say they would even purchase these types of fake milk or meat products.

The annual survey, conducted online by The Harris Poll, among 508 Iowans ages 20 to 60, with grocery shopping responsibilities, shows which choices and issues are motivating them to make their food purchase decisions.  The Iowa Farm Bureau Food and Farm Index® shows more than 8 in 10 (82 percent) Iowa grocery shoppers pay attention to labels.  Nearly 7 in 10 (69 percent) do not agree that plant-based and lab-grown meat substitutes should be allowed to use “meat” on their labels.  And only 3 in 10 (31 percent) would be likely to buy imitation meat, even if it was readily available.  Nearly 6 in 10 (57 percent) also don’t agree that plant-based milk substitutes should be allowed to use “milk” on their labels and less than half (47 percent) would buy almond milk or other dairy substitutes.  That percentage goes down even more once grocery shoppers learn more about milk substitutes, with just 2 in 5 (41 percent) favoring almond milk or other substitutes instead of dairy milk.

Iowans Like Real Meat, Milk
The 2018 Iowa Farm Bureau Food and Farm Index® once again shows Iowa grocery shoppers continue to like their meat, milk and eggs.  In fact, more than 9 in 10 (95 percent) say their households eat meat at least weekly. More than 8 in 10 eat beef (88 percent), chicken (84 percent), and eggs (83 percent) at least weekly, 6 in 10 (60 percent) eat pork at least weekly, and more than half of Iowa households consume milk daily.  That preference for Iowa meat, milk and eggs has remained consistent over the last four years of the survey.   After learning that the “highest quality proteins” (proteins containing all of the essential amino acids in amount that humans need) come from meat, eggs, and dairy, two-thirds of Iowa grocery shoppers (66 percent) say they are likely to increase their consumption of meat, milk and dairy.

This comes as no surprise to Iowa State University’s Dr. Ruth MacDonald.  MacDonald, nationally-lauded Professor and Chair of ISU’s Food Science and Human Nutrition and College of Agriculture and Life Sciences, says Iowans realize “the nutritional benefits of animal foods (meat, dairy and eggs) are significant for all stages of life. In addition to providing high quality, easily digested proteins, these foods contribute micronutrients (vitamins and minerals) that are well absorbed and not found in high amounts in plant foods. Plant-based alternative foods are typically fortified with additives to raise their nutritional value. In some cases (for example plant-based beverages), they may also contain added sugar and other flavorings.”

Once again, the survey shows price (66 percent), freshness (63 percent) and taste (61 percent) are the top three factors driving meat/poultry choices for grocery shoppers, more than any other factors, including nutrition, convenience or how or where the meat/poultry was produced.

Iowans Trust Farmers to Care for the Land and Animals
The latest survey shows large majorities of Iowa grocery shoppers continue to have confidence that farmers are taking care of their land and animals. In the 2018 survey, more than 9 in 10 (93 percent) said they place trust in farmers. Nearly 9 in 10 (86 percent) said they are confident farmers care for their animals responsibly, which is unchanged from 2017 results.  And nearly 3 in 4 (74 percent) said farmers care for the environment responsibly and are taking on the challenge of improving water quality (66 percent).

Methodology
The August 27-September 4, 2018, Iowa Farm Bureau Food and Farm Index® was conducted online within the United States by The Harris Poll on behalf of the IFBF among 508 adults aged 20-60, residing in Iowa who have primary or shared responsibility for household grocery shopping.  The 2017 study was conducted online among 507 adults with the same qualification criteria.  For a complete methodology, including weighting variables, please contact Laurie Johns at ljohns@ifbf.org.