USDA’s September crop report is the first report of the year with objective, field-based observations contributing to the yield estimates for corn and soybeans.  Prior to this report, yield estimates were either trendline yields or trend-yields with adjustments based on weather models. USDA estimates the Iowa corn crop at 2.49 billion bushels and the Iowa soybean crop at 591.2 million bushels (Figure 1). 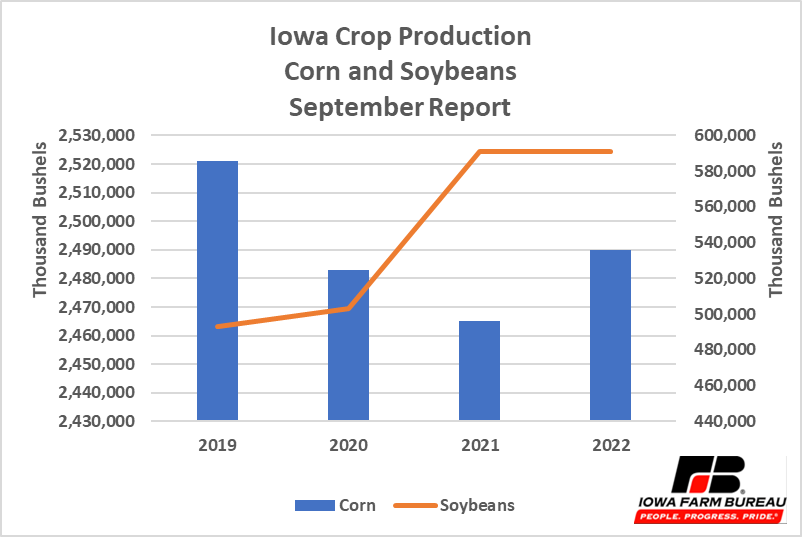 As a background to this report, the percent of the U.S. corn crop rated “Good to Excellent in the USDA weekly crop condition report dropped to the lowest level seen in the past 6 years with just 54% of the corn rated “Good to Excellent”. (See Figure 2.) The decline in the ratings of the U.S. corn crop in 2022 have been relatively consistent with hot, dry weather dominating a significant portion of the western corn areas. Typically, when the September corn yield declines from the August report, and the crop condition rating is ”low” then it is likely that yields in the October and beyond reports are more likely to continue declining that showing improvement. 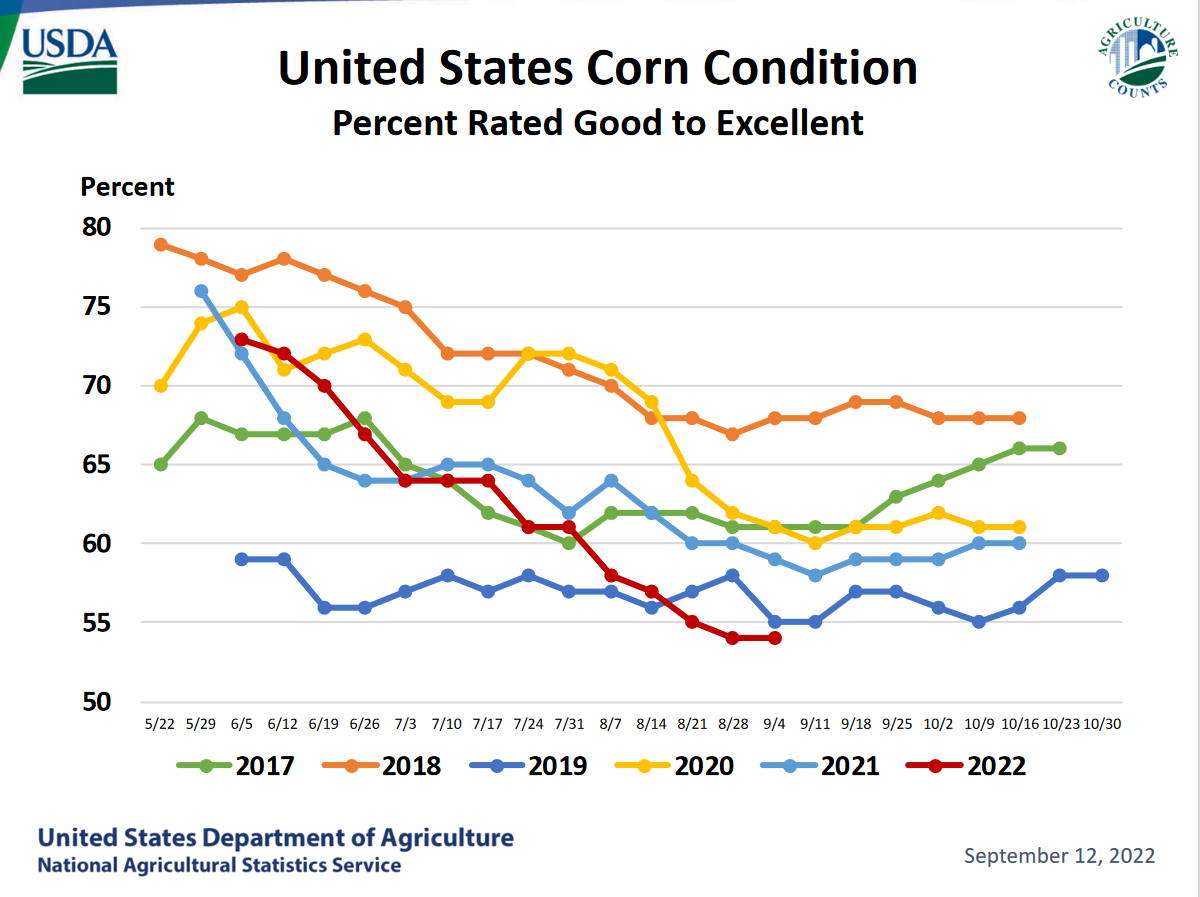 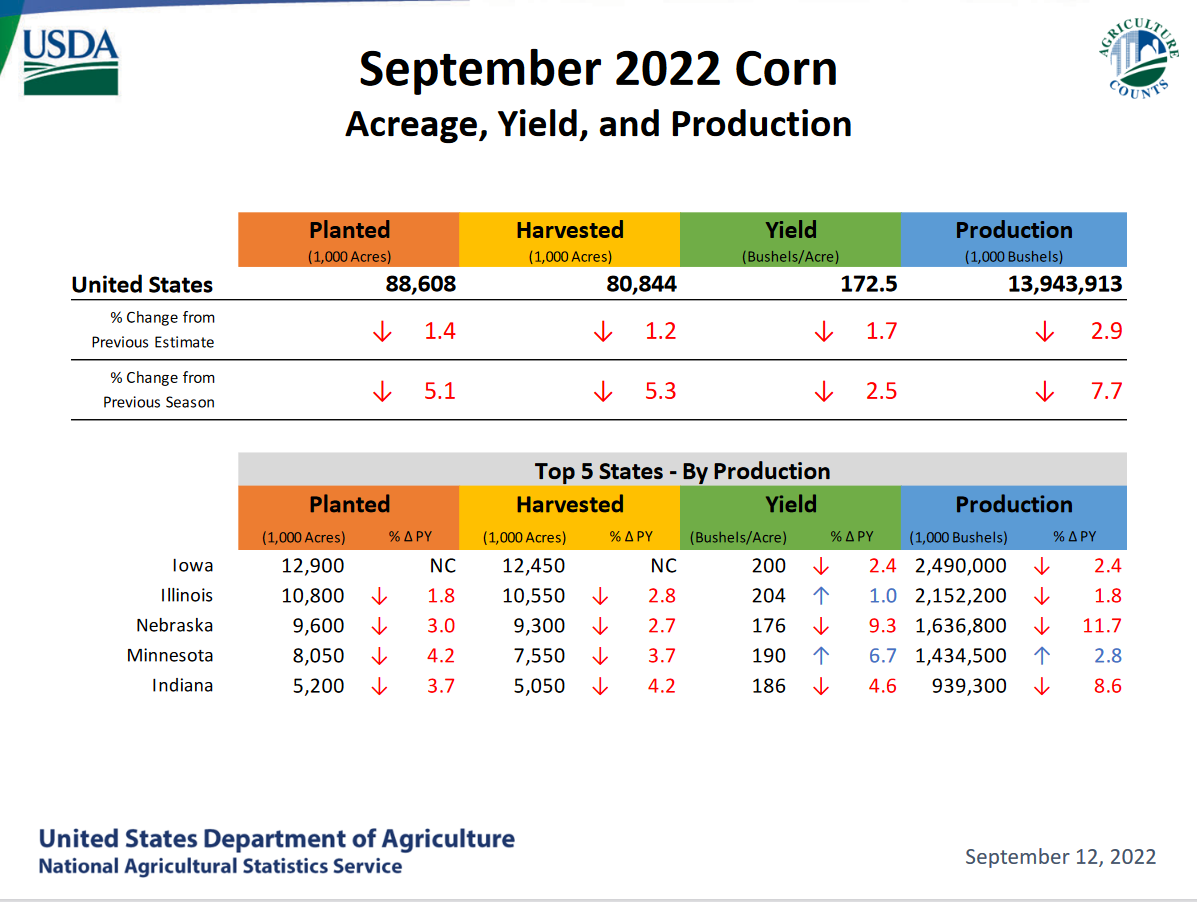 The national corn yield is currently estimated at 172.5 bushels per acre which is slightly below the trendline yield. (See Figure 4.) It is relatively easy to see in Figure 5 where weather has been favorable to this year’s corn crop and where weather has been unfavorable. Iowa has had a mixed weather experience this year with rather dry areas in southcentral and northwestern Iowa, but rather favorable moisture conditions in other parts of the state, especially in the northeastern quadrant. 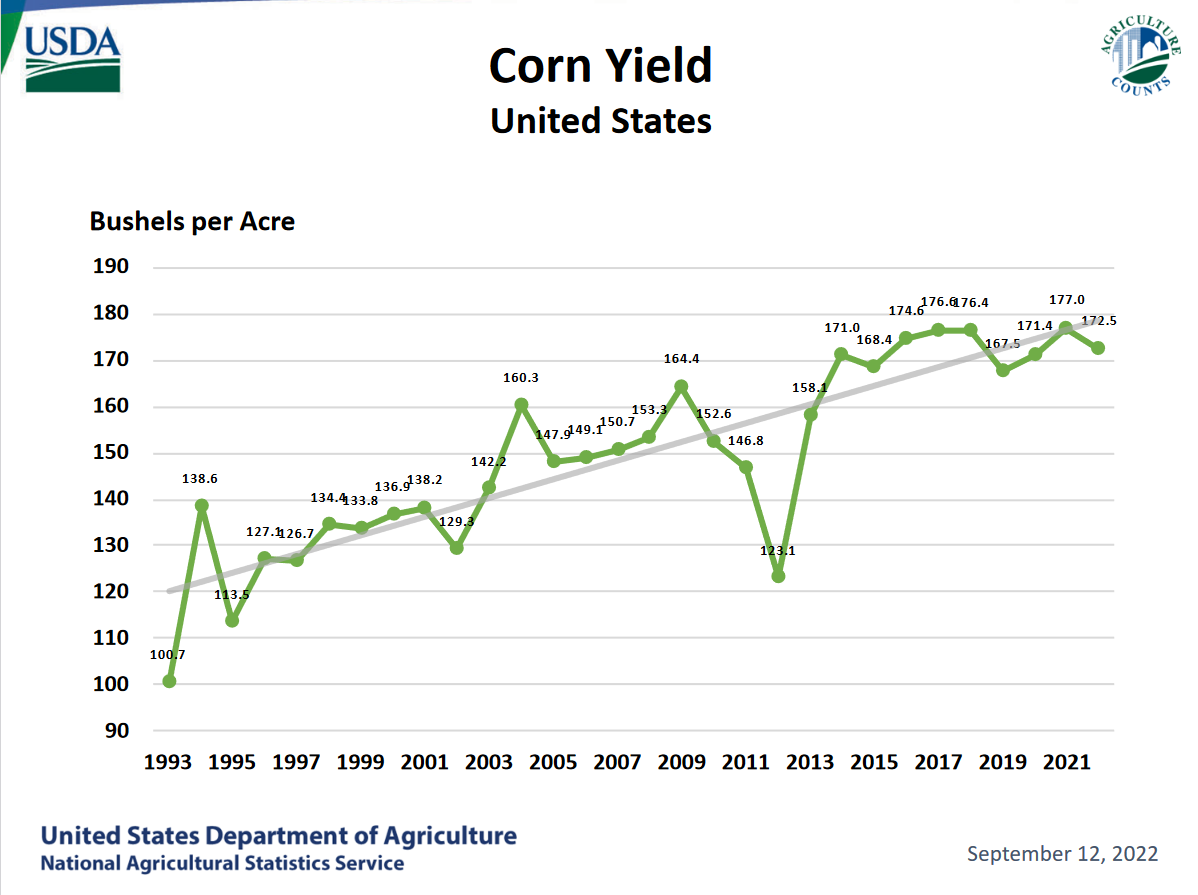 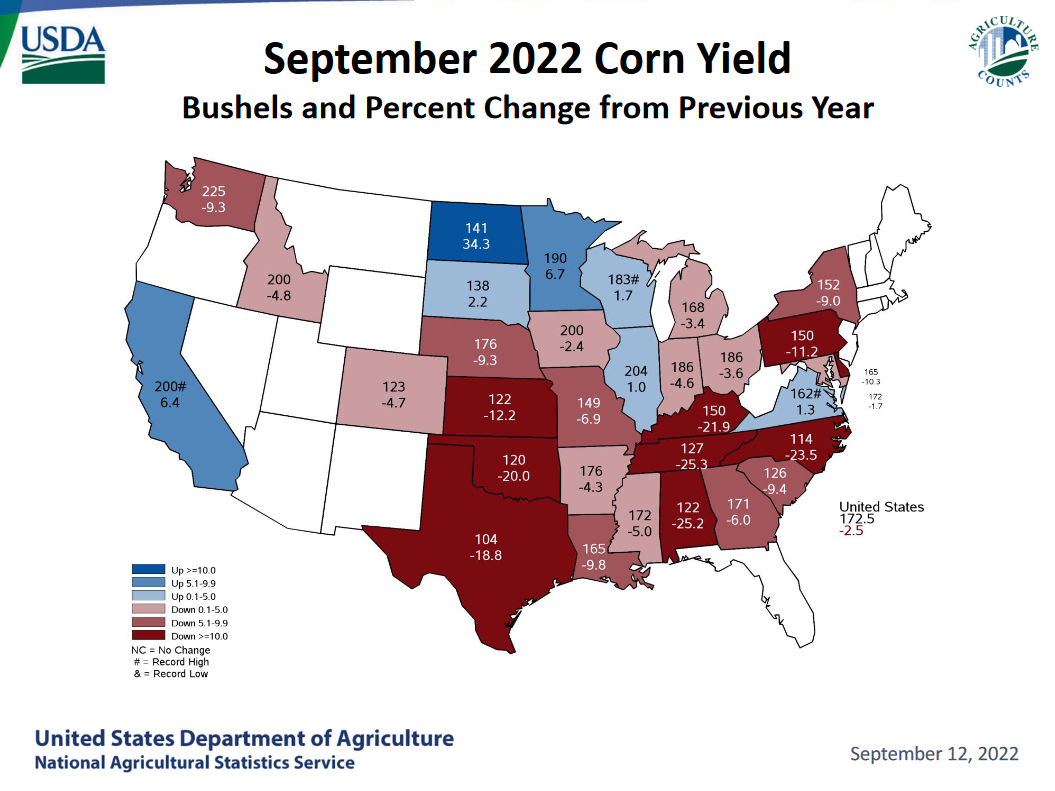 Figure 6 shows the ear counts and related yields for 10-state region for 2017 through 2022 crop years. This year, the ear count per acre is down 1.3% from a year ago. The lower ear count comes despite the overall population per acre being slightly higher than a year ago. The number of “bare stalks” seen in the 10-state region last year was 0.17% whereas this year the number of bare stalks is 2.05%. Average ear weight data will not be gathered until the October report, but based on the crop condition scores, it is likely that average ear weight will be down compared to a year ago. 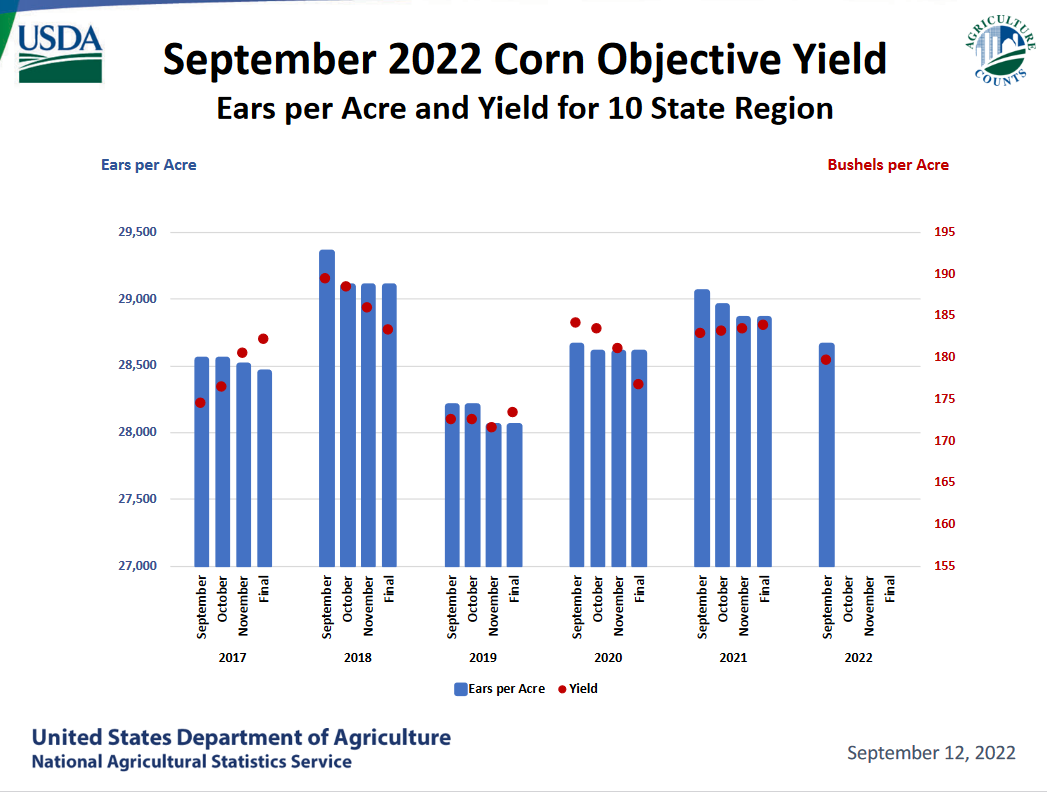 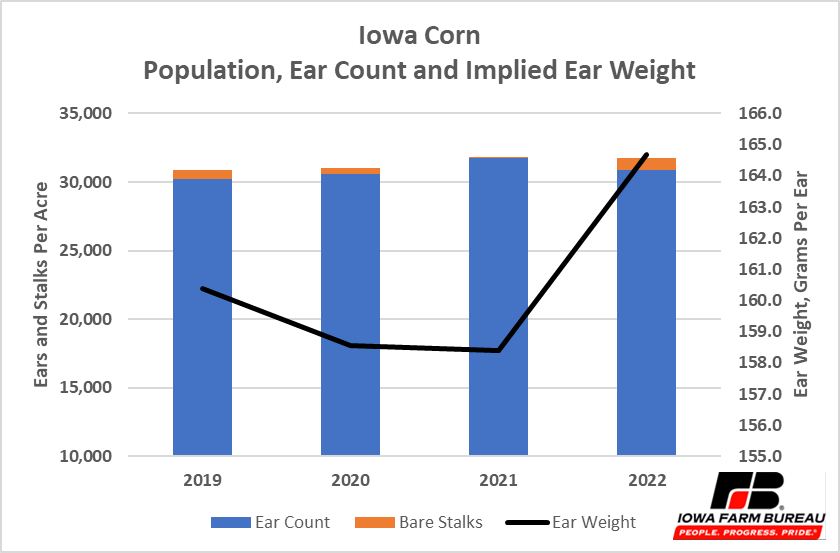 The background conditions for soybeans are not quite as bad as for corn with regards to crop conditions. The percent of the soybean crop rated Good to Excellent has steadily declined since spring but is about the same as last year and better than 2019 at this point in the growing season. (See Figure 8.) 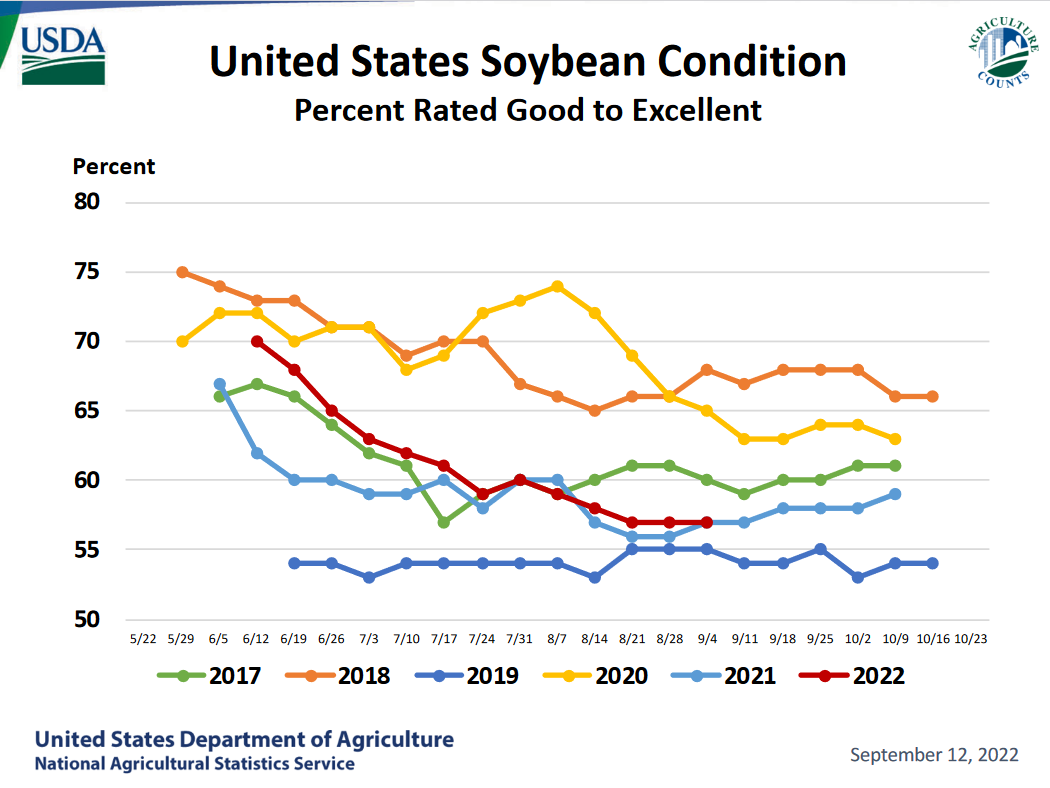 For Iowa, there was no change in planted acreage from the August estimate, however estimated harvested acres of soybeans was decreased 0.1%. The yield estimate declined 4.8%, thus production is estimated to decline 4.9% from the previous report.  Of the other top 5 soybean producing states, only Minnesota had an acreage decline (-2.6%) whereas the other three major soybean producing states had increases is estimated harvested acreage with Illinois up 1.8%, Indiana up 3.4% and Nebraska up 2.3%. The yield estimate for Illinois was unchanged from last month, Minnesota and Indiana were increased and the yield estimate for Nebraska declined. 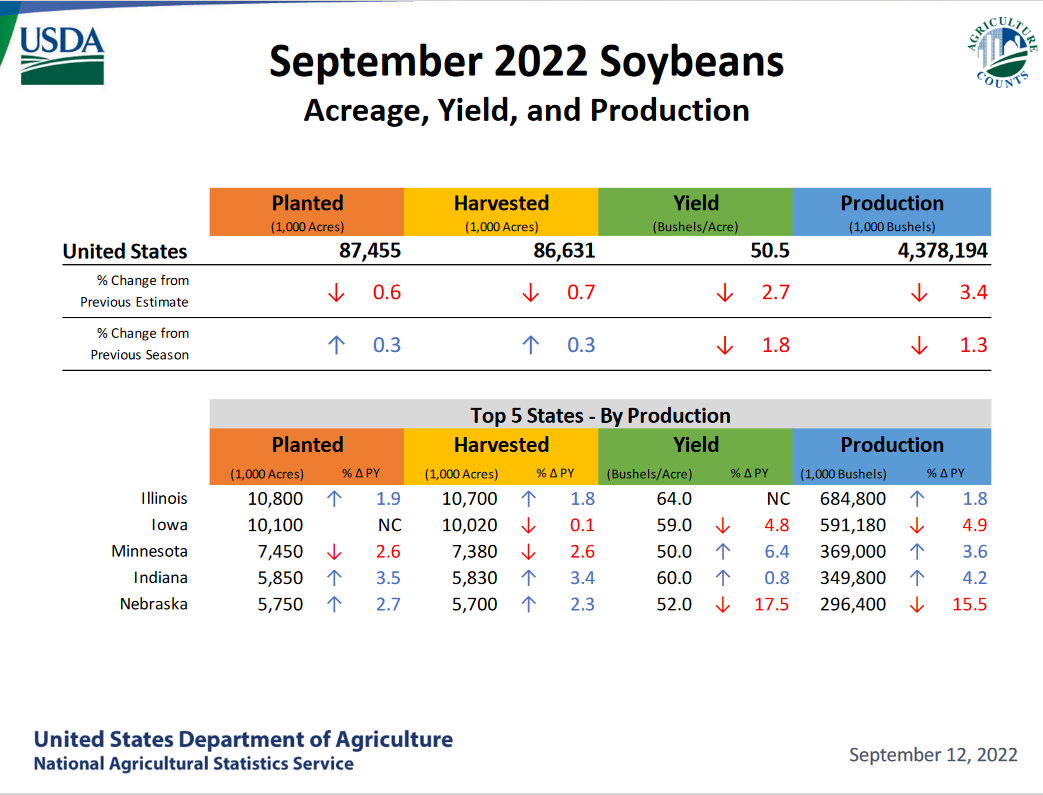 The U.S. soybean Yield is currently estimated to be 50.5 bushels per acre. This is just slightly below the long-term trendline, and if realized would be just the second below-trendline yield for U.S. soybeans since the 2010-2013 period when soybean yields were below trendline for 4 consecutive years. (See Figure 10.)

The map (Figure 11) for soybean yields shows the negative impact that weather has been having on soybean production areas especially in the southern Plains states, but also in the Mid-Atlantic area. The upper Midwest is seeing more favorable weather for soybean production in 2022 than they had last year despite a relatively late start to the growing season. Record yields are currently projected for Arkansas, Mississippi, and Indiana. But all around those states, growing conditions for soybeans have been less favorable this year than last year. 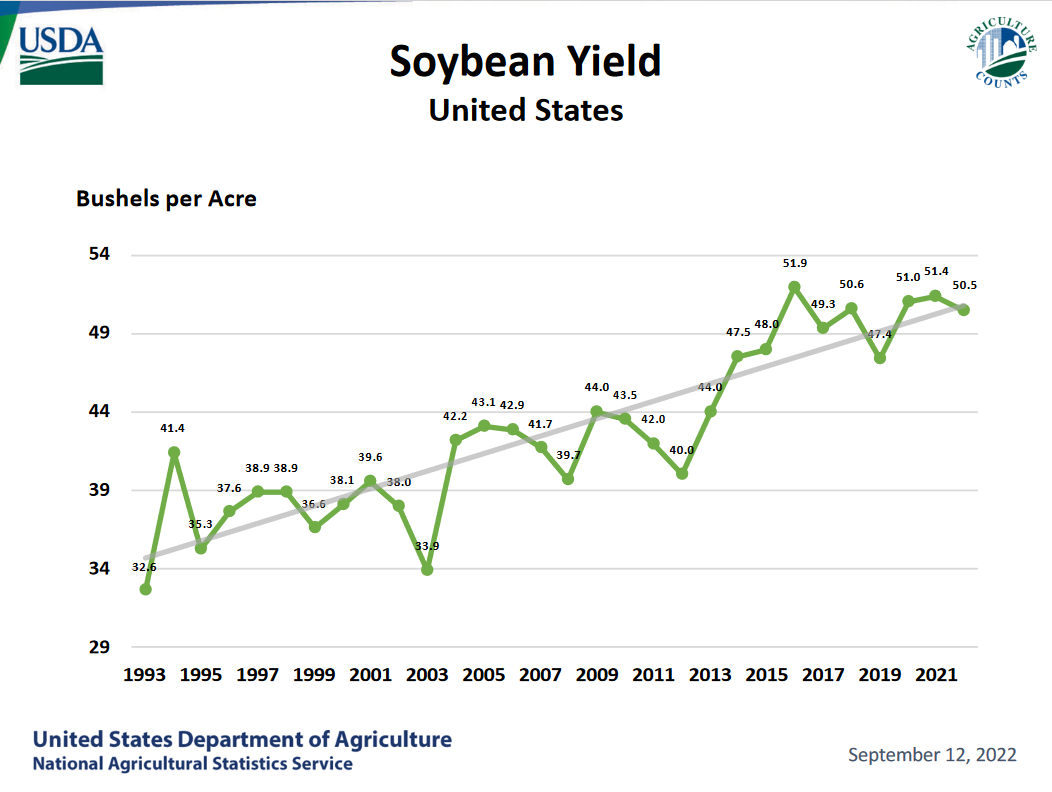 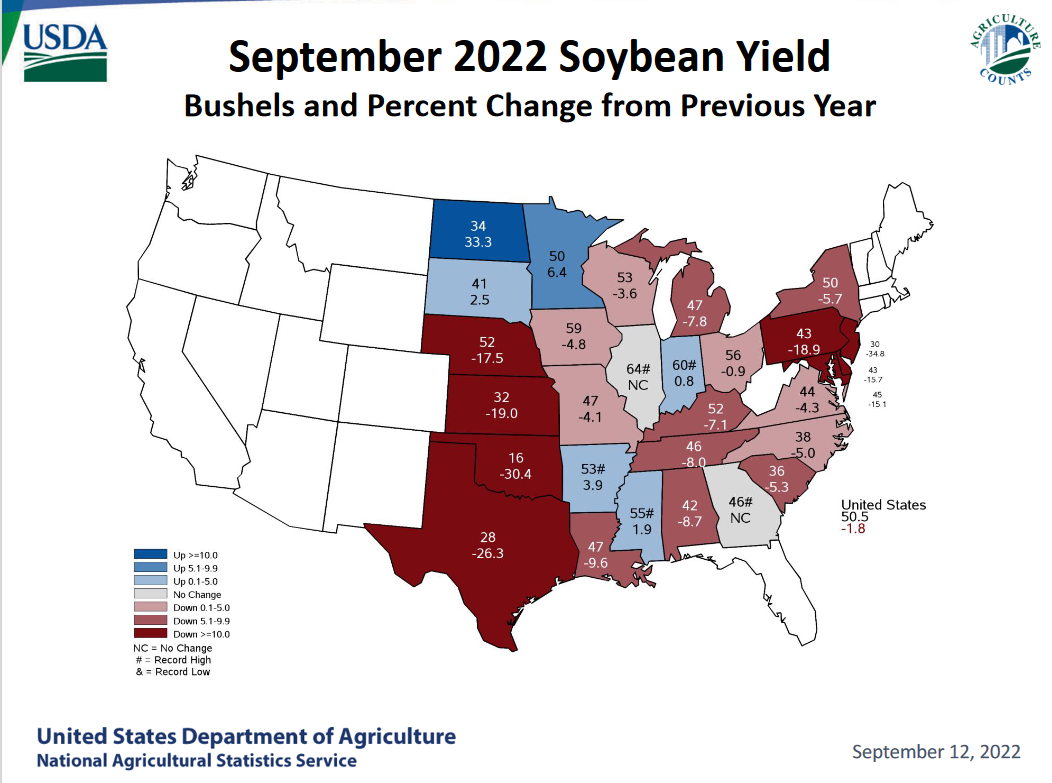 As shown in Figure 12, pod counts in the 11-state region are significantly lower than last year and nearly as low as the last time yield was below-trend (2019). The October crop report will include seed weight and it is still “up in the air” as to how much some late August – early September rains may help put on extra weight in the pods that are there. Currently, the implied seed weight suggested by the yield estimates would be a record high 0.38 grams of seed per pod. The previous high was set in 2019 at less than 36 grams per pod. This would suggest that there is room for soybean yields to modestly decline in future reports as it is unlikely that pod counts will increase much and pod fill is likely to be less than 0.38 grams of seed per pod. 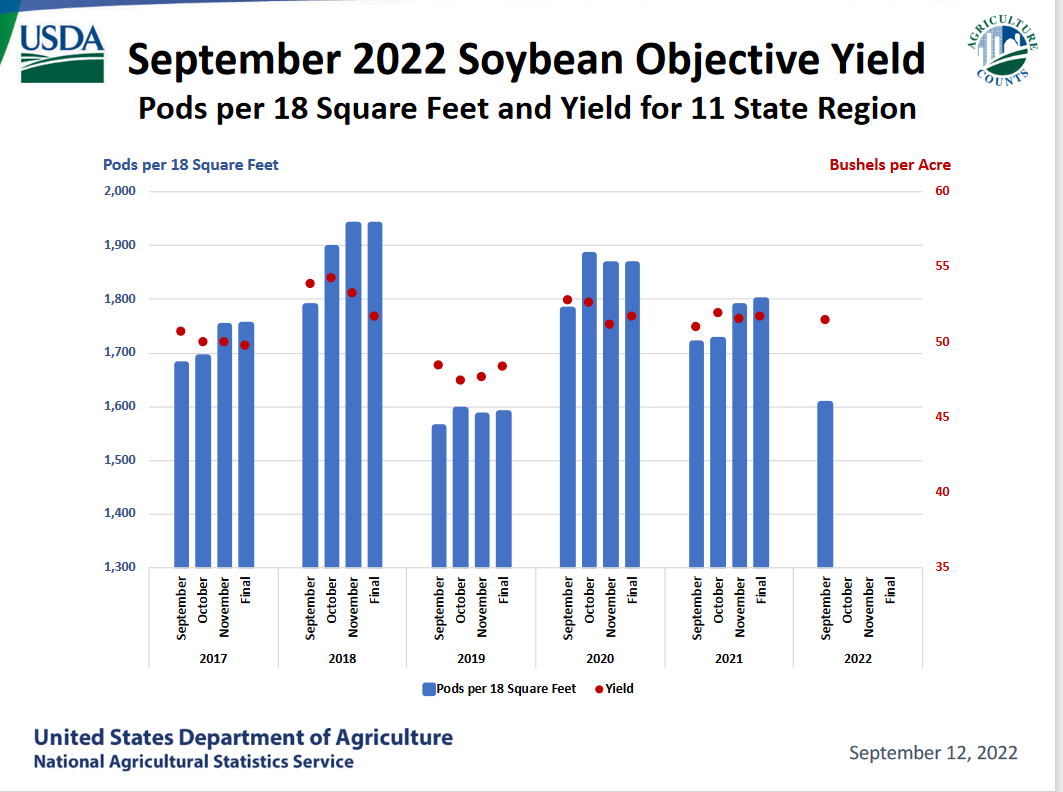 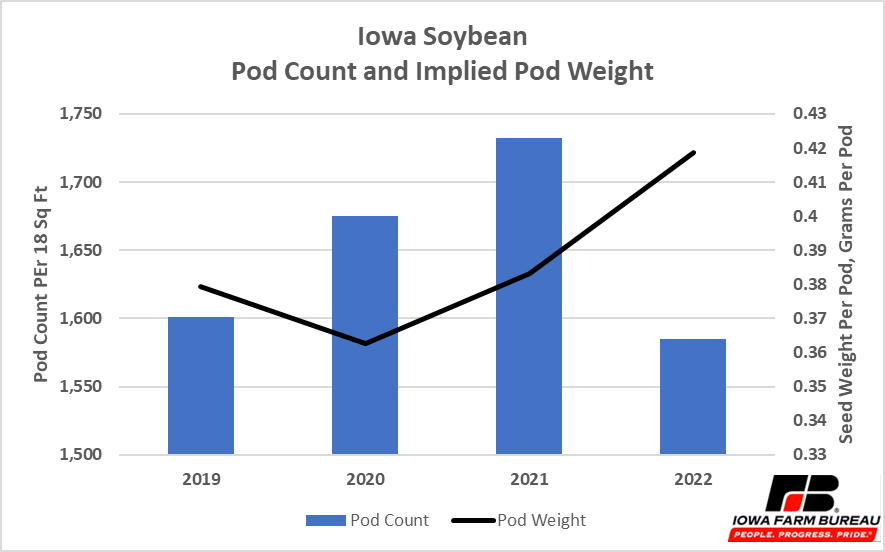