Russia and Ukraine are important producers of agricultural commodities globally. Their share in global production is particularly significant for sunflower seed, barley, wheat, rapeseed, corn, and to a lesser degree for soybeans. The two countries together made up 56% of world sunflower seed production between 2018/19 and 2020/21, on average.  Also, these two countries accounted for 18% and 14% of global barley and wheat production, respectively, during that period (see Figure 1). 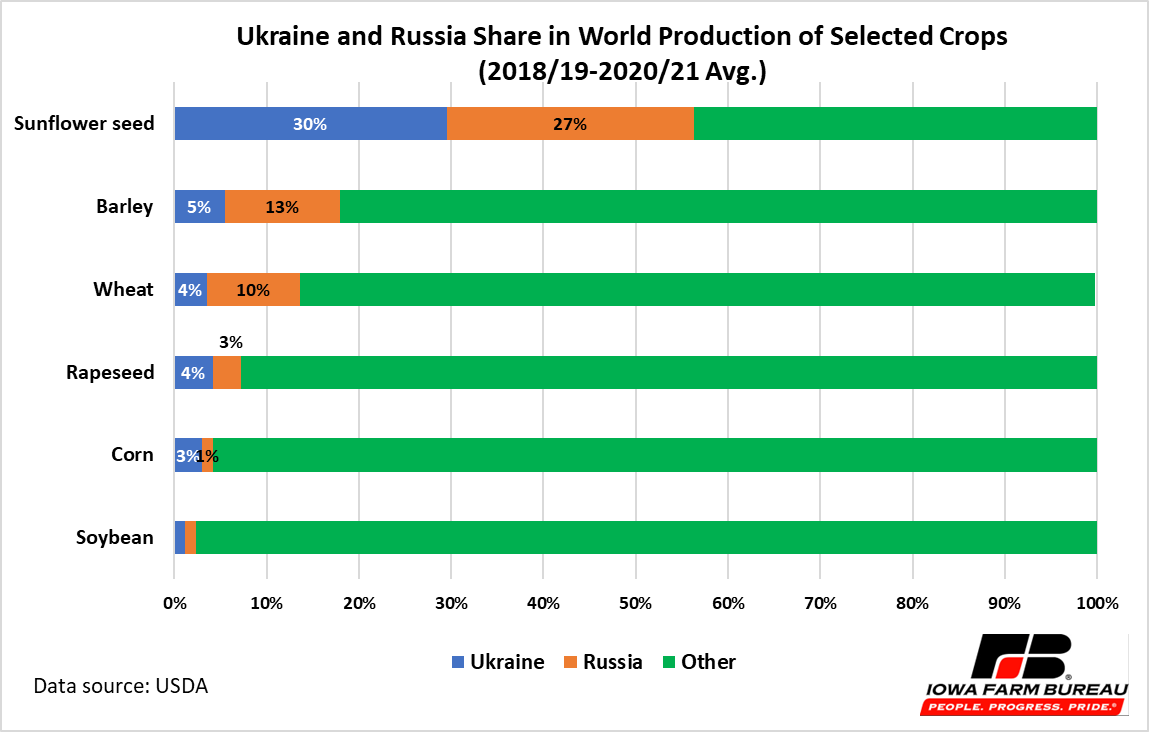 In terms of trade, Ukraine and Russia are key suppliers of crops and agricultural products to many countries around the world. The totaled exports from Ukraine and Russia supplied 77% of world sunflower seed oil, during 2018-19-2020/21, on average. The export share of these two countries was lower for other crops and products but still significant. For example, Ukraine’s and Russia’s shares of global exports of barley and wheat (i.e., wheat, flour and products) were at 32% and 29%, correspondingly, during the three-year period.  Whereas for sunflower seed, rapeseed, and corn, the combined shipments from these two countries made up 25%, 20%, and 18%, respectively, over the 2018/19 -2020/19 years, on average. Ukraine and Russia supplied 1% each of global soybean exports, on average, (Figure 2).

Customarily, most exports from Ukraine have been carried out by sea. According to a report by FAO1 (June 2022), the ongoing fighting in Ukraine, has damaged the country’s infrastructure, from inland to seaport to storage and processing, causing suspension of commercial shipments across ports. The country has limited means of alternative transportation, including rail, river, or road transport. Ukraine has switched to shipping by land, including by rail, but volumes are low.

Further aggravating the current situation in Ukraine, is the increase in insurance premium rates or the nonexistence of war coverage in insurance contracts for vessels sailing to the Black Sea. This results in higher costs of food imports from this country. 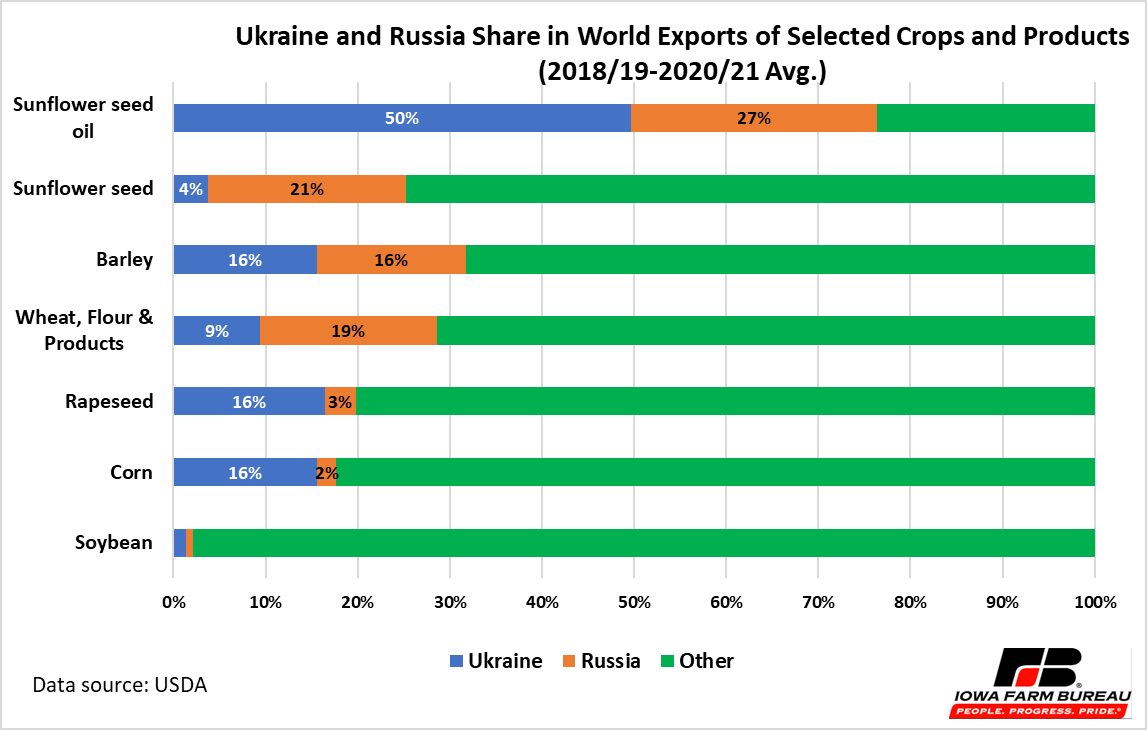 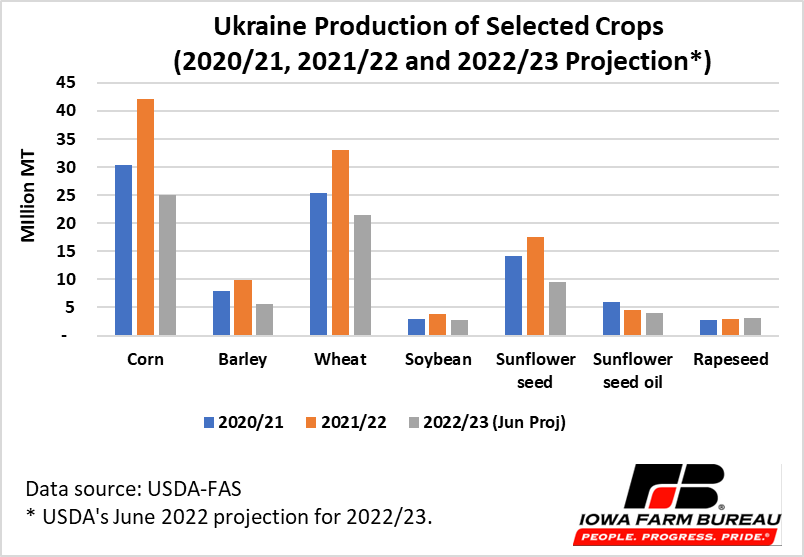 Because of current conditions in Ukraine, the latest USDA’s production and export projections (June 2022) for the 2022/23 year indicate reductions for most crops and products compared with the previous year.  If realized, 2022/23 Ukraine’s production would decline more than 35% for crops such as sunflower seed (46% to 9.5 million MT), barley (43% to 5.7 million MT), corn (41% to 25.0 million MT), and wheat (35% to 21.5 million MT) (Figure 3). For soybeans and sunflower oil, production would decline 26% to 2.8 million MT and 10% to 4.1 million MT. For Russia, the projections indicate that production of corn, barley, wheat, and soybean would increase in the 2022/23 marketing year, with highest increase in barley and soybean production at 11%. 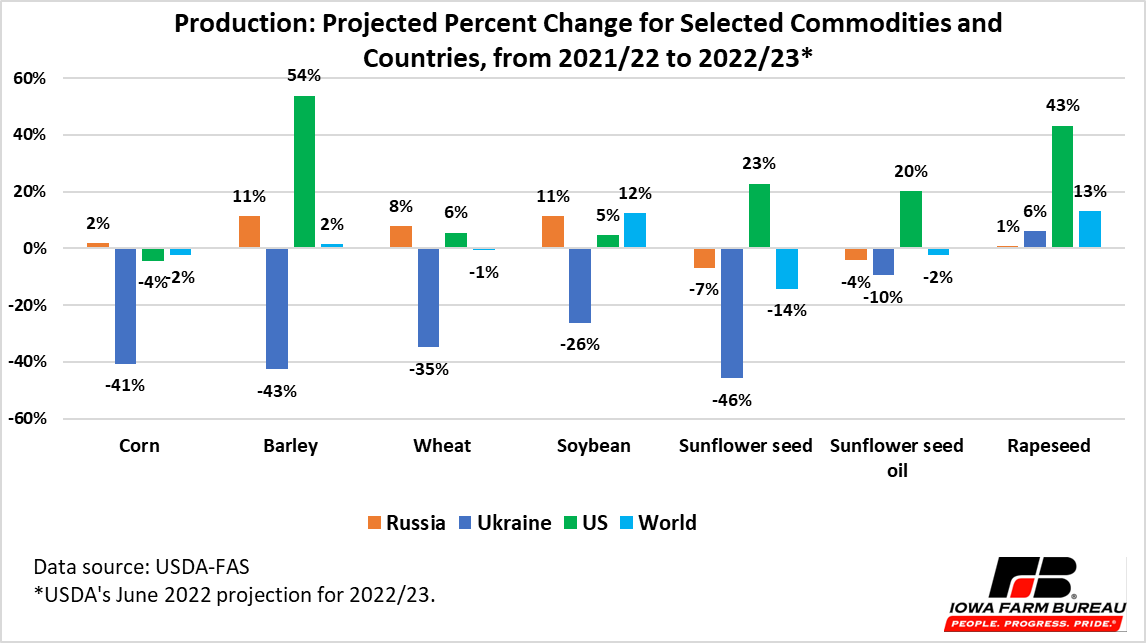 USDA export projections in June 2022 for the 2022/23 marketing year for selected commodities and countries are shown in Figure 4. For Ukraine, exports of corn, wheat, barley, sunflower seed, and sunflower oil are all expected to fall (Figure 4).

In addition, Ukraine’s exports of wheat are projected down 47% to 10.0 million MT in the next marketing year. US wheat shipments are expected to fall 3% to 21.0 million MT, accounting for 10% share in world export. Because of Russia’s 21% projected increase in wheat exports to 40.0 million MT, global wheat exports are expected to rise 2% to 205.449 million MT. Russia would continue as the top exporter of wheat with a global market share of 19%, which would be up from 16% in the previous year. Other countries such as Canada, European Union, Kazakhstan, and Turkey would also expand their shipments of wheat in 2022/23. 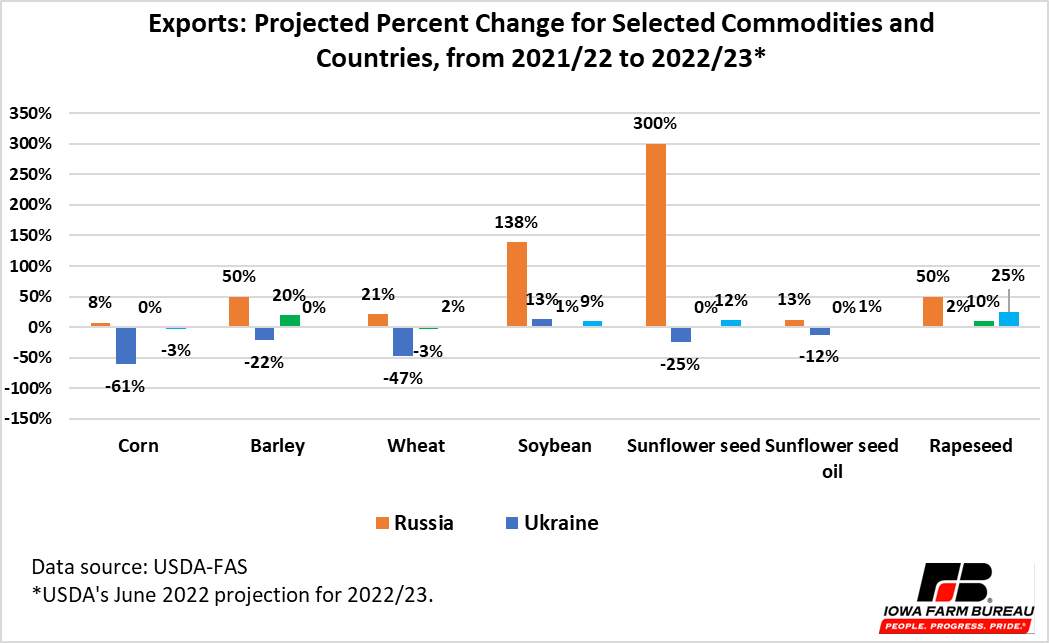