The Renewable Fuel Standard: An Overview of the Current Program and How Proposed Changes Could Affect Agriculture

Under the RFS program renewable fuels are broken into five major classes: D3, D4, D5, D6, and D7 (Table 1). Each class has certain requirements the fuel must meet like feedstock and greenhouse gas (GHG) emission reduction requirements. For example, to be classified as D6, the fuel needs to release 20% less GHG emissions over its life than the petroleum products it is replacing. Other codes are more restrictive, for example D3 requires that GHG emissions be 60% below petroleum products and specifies that corn starch cannot be the feedstock.

Targets are set in terms of RINs, or ethanol gallon equivalents, except for biomass-based diesel, which was set in terms of actual gallons of fuel. Targets represent the minimum amount of renewable fuel that must be included in the fuel supply by fuel refineries and importers. Targets set in the 2007 statutes are shown in Table 3 in the columns marked statute. Conventional biofuel is not actually reported in statute but is calculated as Total Renewable Fuel minus Advanced Biofuel. 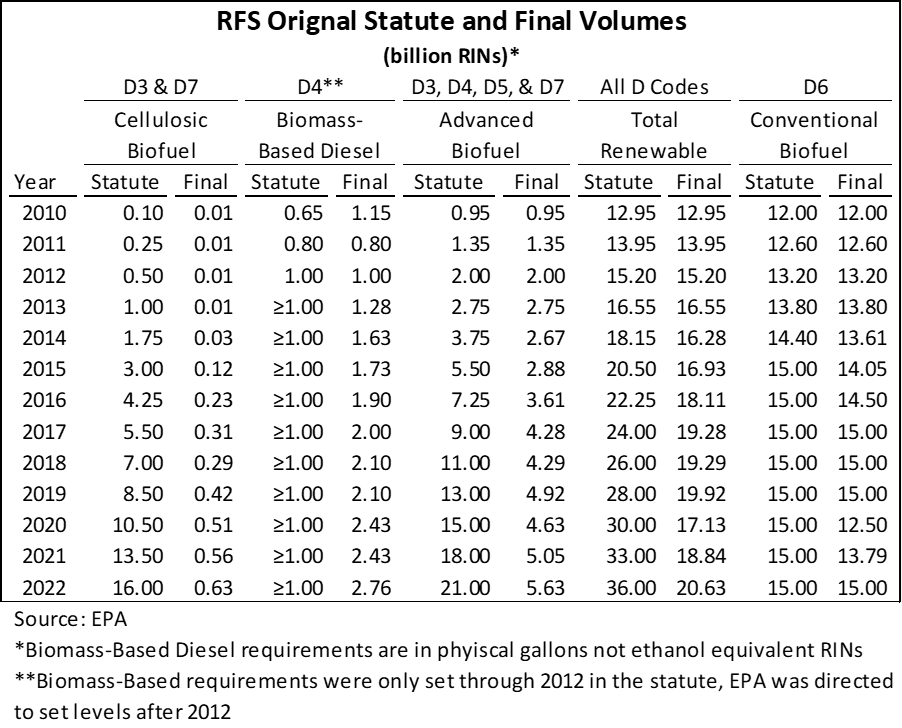 To determine how much renewable fuel or how many RINs each obligated party needs to comply with the standard, percentage targets are calculated based on US fuel consumption estimates. The result is the percentage of fuel that must be renewable each year. Historic blending requirements calculated by EPA are shown in Table 4. 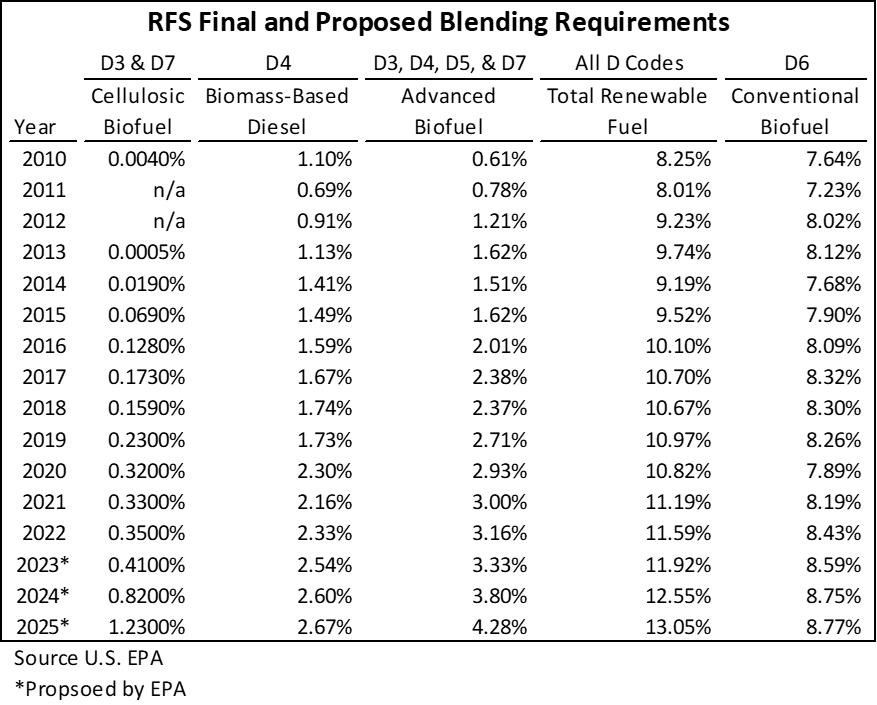 In 2007 Congress set RFS targets through 2022 for all fuel categories except biomass-based diesel which was set through 2012. Congress understood renewable fuel markets might not develop fast enough to meet the requirements specified by the statute. Therefore, EPA was given the authority to change targets if the market for a certain fuel could not realistically meet the statutory requirement. Furthermore, EPA was also given the authority to set targets beyond 2012 for biomass-based diesel and beyond 2022 for all fuel categories when the original targets set by Congress expired.

RINs generated each year, the yearly requirement, and the difference between production and the annual RFS requirement is shown in Table 5 for each renewable fuel category. December RIN production data is not yet available for 2022 so most production numbers are smaller than the requirement for 2022.

It is important to note that RINs that are not retired to meet RFS requirements in the year they are generated can be carried forward. Furthermore, an obligated party that does not meet its requirement in a given year may carry a RIN deficit forward for one year only. These two reasons mean it is possible to have fewer RINs produced in one year than are required, but compliance with the RFS is still met. 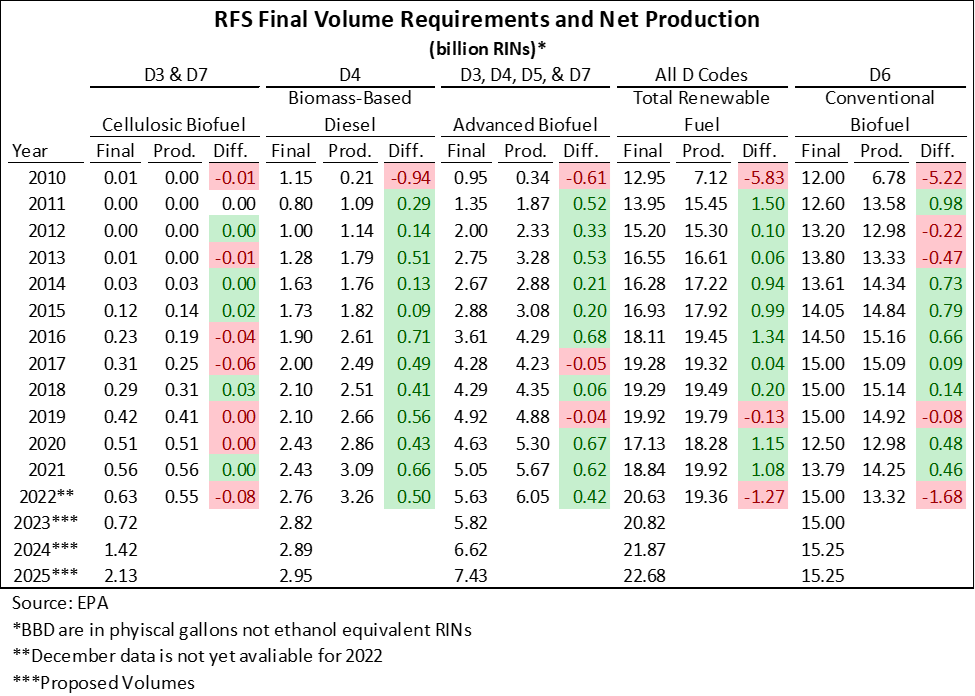 The EPA’s first proposal of new targets covering 2023 to 2025 were released on November 30, 2022. The released targets in each of the four categories are included in Table 5. The implied blending requirements were given in Table 4. Again, these numbers for 2023-2025 are not yet official, they have been proposed by the EPA and the EPA is currently taking comments on these numbers for consideration before finalizing them.

The RFS Program incentivizes the use of biofuels. Higher volume requirements put more pressure on blenders of fuel to use biofuels and create more incentives for investment into biofuel production. Major agricultural biofuels are corn ethanol, which is a D6 fuel and falls under conventional biofuel, and biodiesel and renewable diesel, which are both D4 fuels and fall under biomass-based diesel fuel.

Conventional biofuel requirements were raised in the EPA proposal which is good for the ethanol industry. However, biomass-based diesel fuel requirements were raised less than expected. Notice in Table 5 that biomass-based diesel production has consistently surpassed its requirement under the RFS. Also, future requirements, even those in 2025, are below current production levels. EPA wants to avoid setting targets above what the market can deliver, but given current production is well above target levels and both soybean crush and renewable diesel production are expected to increase in the coming years, it was strange to see these numbers as low as they were. Should these proposed requirements stand, biodiesel and renewable diesel will have less than anticipated support from the RFS program in the coming years.

Another area of interest to many is EPA’s recent proposal to begin including electric vehicles in the RFS framework. Electricity produced from qualified renewable biomass and used as transportation fuel would be available to claim electric RINs (eRINs).

The EPA outlined its proposed approach and other alternative approaches for eRIN generation in its proposal. The EPA’s proposed approach would allow electric vehicle manufacturers, called original equipment manufacturers (OEMs) in its proposal, to generate eRINs based on their light duty electric vehicle sales if they establish contracts with parties that produce electricity from qualifying biogas (renewable electricity generators).

How eRINs Could Affect Agriculture?