On October 5, 2022, OPEC+ announced it would be reducing production by 2 million barrels per day in November 2022. This represents roughly a 2% reduction in current world crude oil production. The production cuts for OPEC+ countries are shown the table below. 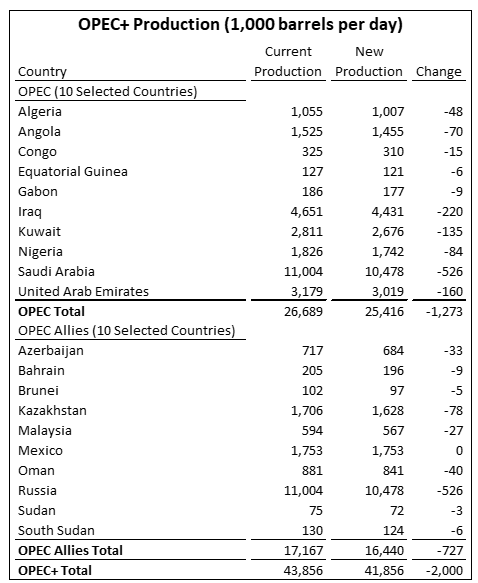 The Organization of Petroleum Exportin Countries (OPEC) is a group of 13 major oil producing countries that operate as a cartel. The group sets production quotas for member countries to control the supply of oil and thereby the world oil price. The 13 member countries of OPEC are: Algeria, Angola, Congo, Equatorial Guinea, Gabon, Iran, Iraq, Kuwait, Libya, Nigeria, Saudi Arabia, United Arab Emirates, and Venezuela. Together OPEC members produce over 35% of world oil.

Other countries, including Russia, are not members of OPEC, but are allies of the organization. The group of OPEC plus its allies is typically referred to as OPEC+. OPEC+ produces almost 60% of world oil.

Major oil producers not in OPEC+ include the U.S., Canada, and China, who together represent almost 25% of world crude oil production.

Prior to this announcement, crude oil prices had been heading lower, primarily due to fears of recession slowing the demand for oil.

News that OPEC+ was considering a notable reduction in oil production was reported over the weekend. Oil prices responded by moving higher to begin the week.

The nearby Brent crude oil contract, the world oil benchmark, also increased heading up to the OPEC+ announcement. Last Friday Brent crude closed at $85.14 per barrel. By Tuesday prices jumped 7.8% to $91.80 per barrel.

It is not yet clear how high the OPEC+ production cut will push oil prices. But increases in oil prices will  likely be noticeable in higher gas and diesel fuel prices soon.