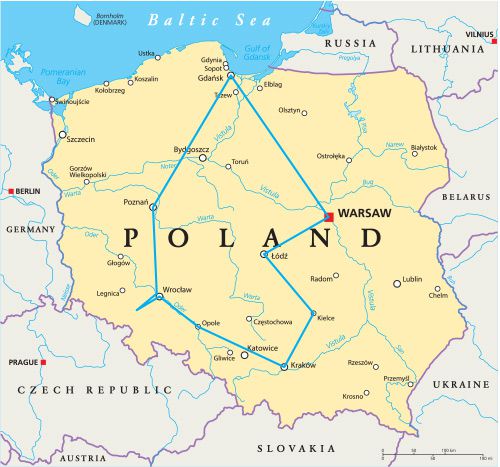 The Iowa Farm Bureau Federation (IFBF) is offering its members an exclusive opportunity to participate in an intensive market study tour to Poland in late June and early July of 2017.

The upcoming study tour to several sites in Poland will begin June 26 and will last through July 6. It will explore the agriculture and cultural sites in a country that is becoming an agricultural powerhouse in Europe, said Dave Miller, IFBF director of research and commodity services, who will lead the market study tour.

“Poland is one of the leading examples of a country that has emerged with a fairly robust agricultural economy, and general economy, from both the devastation of World War II and from the grip of communism,” Miller said. “It will be very interesting to see how agriculture in Poland has responded after being released from the command and control system of communism, as well as its integration in to the European Union (EU).”

Iowans on the 2017 market study trip to Poland will learn about a competitor to the United States in global markets, as well as a potential customer, Miller said.

Poland shares many of the soil characteristics of Ukraine, which has emerged as a major competitor to the United States in grain export markets in recent years. However, Poland’s northern climate is more conducive to small grains, such as wheat and barley, Miller said. Those grains often to compete with U.S. in the world feed grain markets, he said.

In addition, Poland’s livestock sector is becoming a leading supplier of meat and other livestock products to both Europe, as well as exporting outside of the EU, Miller said. “Much of livestock sector is still a few decades behind where we are in the United States and it will be interesting to the see how they are moving forward.”

Conversely, Poland could develop into an importer of some U.S. ag products, Miller said. Soybean meal, he said, probably has the largest potential because Poland, like much of Europe, is typically deficient in the protein needed in livestock rations.

As Poland’s economy grows, there could also be demand for higher-value foods from the United States, such as beef and pork, Miller said.

In addition, the IFBF study tour to Poland will provide insight into how farmers there perceive technologies, particularly biotech crops, which are widely used in the United States but are essentially banned in the EU, Miller said.

Poland tends to be more open to the technology than countries in western Europe, such as Germany and France, Miller said. “I really think that Poland could be an emerging voice in questioning the EU’s restrictive positon on biotech,” he said.

The Iowans on the market study trip will also have a chance to see many cultural sights in Poland. Some of those include the Warsaw, the Polish capital, the medieval city of Krakow and the bustling seaport of Gdansk on the Baltic Sea.

This is the fifth IFBF market study tour. In 2013, the IFBF market study tour traveled to Ukraine and other Black Sea countries to see emerging grain production there. In the summer of 2014, Miller led a study trip to China, to study the potential for continued growth of U.S. exports to the world’s most populous country. In March of 2015, a group of Farm Bureau members traveled to Brazil to study the livestock industry there. In the spring of 2015 IFBF study trip traveled to South Africa to view an emerging agricultural nation in the Southern Hemisphere.

Participants for the upcoming IFBF Poland market study tour will be selected based on potential leadership participation in Farm Bureau and other agricultural organizations, communication skills and a willingness to "give back" to communities through oral and written presentations. The tour is exclusive to IFBF members who apply and are selected.

The application deadline has been extended to February 15, 2017.

Members selected for the Poland study tour will be required pay $1,500 (reduced from $2,000 due to continued favorable exchange rates between the U.S. and the Euro) to fund a share of the cost of the tour. The state organization will fund the rest of the tour costs and no county Farm Bureau finances will be used.

Participants will need to have a valid passport through December 2017.

Participants will be required to give a minimum of four post-trip presentations in local, county, district or state venues, such as county Farm Bureau annual meetings, community organizations or youth groups and/or through the public media.

“Our market study tours are knowledge-share trips, and so participant willingness to share the knowledge they gain in Poland with fellow Iowans is a must," Miller said. "We want to be able to share the information we learn on the trip as widely as possible. We’ve had very good response to members’ presentations about earlier market study tours and believe that Poland will also be of great interest to members and others in the community."

In addition, Miller added, the tour will be rigorous, so applicants should be in good health. "We will be up early and often up late every day so that we can obtain as much information on the agriculture and people of this interesting and changing part of the world," he said.

For more information on the IFBF Poland market study tour, contact Lavonne Baldwin at lbaldwin@ifbf.org or by phone at 515-225-5633.  You can also obtain an application by emailing Baldwin or Miller (damiller@ifbf.org ).

Track the tour's progress (including updates from the participants) on the 2017 Iowa Farm Bureau Market Study Tour to Poland Facebook page.