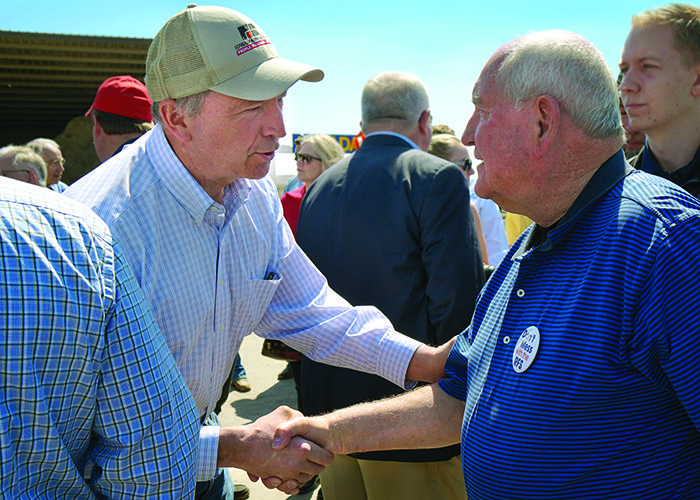 Secretary Perdue (pictured above with President Hill) toured Farm Bureau member Bill Couser’s farm in Nevada and gave his first farm policy speech Friday morning, to rousing applause by farmers.  Perdue, who was sworn in as U.S. Agriculture Secretary just over a week ago, says the Trump administration will fight to eliminate unfair trade barriers and open new markets for U.S. agricultural commodities.

“What are we going to do about trade? Governor Branstad and I are going to go to China and sell all of the Iowa beef we can,” said Perdue, to an enthusiastic crowd of farmers.  Purdue also said he will be “an unapologetic advocate for trade.  If you grow it, we’ll sell it.”

Perdue also met with Hill and a select group of farm leaders at a town hall meeting following his address, and said the Trump administration will keep their promise to maintain renewable energy targets.  President Hill, a Warren County crop and livestock farmer, says IFBF’s diverse membership will be pleased to hear that the Trump administration sees the value of Iowa agriculture. “We’re so appreciative to have a Secretary of Agriculture with his experience and his philosophy. It really improves the outlook for all of agriculture to have somebody like him advocating for us.”