A new wetland on Denny Lyle’s farm is expected to both solve an ongoing agronomic problem and produce long-term water quality benefits for decades to come. That’s exactly what the Keokuk County farmer was aiming for.

The new wetland, Lyle said, should reduce farming headaches because it’s located where water from tile lines tended to congregate, often causing erosion and making it tough to farm. But the wetland shouldn’t adversely affect any of the field drainage around it, he said.

Lyle also likes the fact that the wetland, along with his terraces, cover crops and other conservation practices, will help improve Iowa’s water quality.

“I think we all want to do our part to reduce nitrate losses, and a wetland is a very good tool for that,” said Lyle, a Keokuk County Farm Bureau member who raises corn and soybeans near Keota.

It’s been a similar situation for Louis Beck, who farms in the Miller Creek watershed in southern Black Hawk County. Contractors are finishing up a new wetland on a field of his that has always been a struggle to farm.

They accessed cost-share funding through various federal programs, as well as the state’s Clean Water Iowa initiative to help finance their wetland projects. The costs of development and construction of wetlands and other edge-of-field practices installed through IDALS are nearly 100% covered by state and federal funding sources, said Shane Wulf, an environmental specialist for the IDALS water resources bureau.

Lyle and Beck aren’t alone. A growing number of Iowa farmers and landowners are also working with local conservation officials to determine if their topography would work for a wetland, Wulf said. “We have certainly seen the interest in wetlands accelerating, and it’s coming from all parts of the state,” Wulf said.

Wetland construction isn't new in Iowa. Over the past 15 years, Iowa farmers and landowners have built roughly 90 wetlands through the Conservation Reserve Enhancement Program (CREP). It’s a federal, state, local and private partnership that provides incentives to landowners who voluntarily establish wetlands for water quality improvement in Iowa’s tile-drained regions.

Progress in the CREP program has been slowed by costs and federal wetland regulations. But now, Wulf noted, there are more than 30 additional wetlands set to be installed in the next two or three years.

Picking up the pace

The pace of wetland construction, he said, has increased and expanded with the addition of conservation funding through Senate File 512.

That measure, approved by the Iowa Legislature during the 2018 session and signed by Iowa Gov. Kim Reynolds, provided $270 million in long-term, sustainable funding for implementation of the Iowa Nutrient Reduction Strategy (INRS).

With the sustained funding, IDALS has targeted cost-share programs for edge-of-field prac­­t­­ices, such as wetlands, bioreactors and saturated buffers, which can deliver long-term water quality benefits. The department has also worked to scale up the pace of design and development of edge-of-field water quality projects, Wulf said.

The interest in adding wetlands is exciting for Iowa Agriculture Secretary Mike Naig. “I’m a big fan of wetlands. They fit well on the landscape and they treat lots of acres with a relatively small reduction in crop acreage. You also get habitat benefits.”

One of the tools

Wetlands are just one of several tools available to farmers and landowners in the science-based INRS to reduce nutrient loss and improve water quality. The strategy includes a wide range of conservation tools, such as cover crops, reduced tillage and nutrient management, which can help improve water quality.

Wetlands are especially effective at removing nitrates from water from tile drainage, a key focus of the Clean Water Iowa initiative, he said.

“If they are positioned right and plumbed right, they really add a lot of value for a long time,” Porter said.

Research and monitoring by Iowa State University shows that well-placed wetlands can remove 30% to 70% of nitrogen loads from drainage waters. The wetland accomplishes that by slowing water flow, which allows bacteria to remove nitrate from the water and to release it as an innocuous gas into the air.

IDALS and other conservation officials are continuing to work with farmers and landowners to promote the construction of more wetlands as the Clean Water Iowa initiative scales up, Wulf said. Wetlands tend to work well in pattern-tiled fields to reduce nitrate in water without causing adverse effects on drainage, he said.

In addition, wetlands are a good fit in the Prairie Pothole region of north central Iowa because engineers can often locate them in natural depressions in the landscape, Wulf said. “That’s usually where the water naturally flows, and it can help reduce construction costs,” he said.

It’s important for farmers and landowners interested in wetlands to visit their local state and federal conservation offices, Porter said.

“Some farmers can make a wetland work on their land, and some don’t have the right topography. But there are lots of other conservation practices like cover crops and other things we can suggest to them to have a positive impact on water quality,” he said.

Beck and his wife, Pat, also look forward to the habitat enhancement of their new wetland, as the native grasses get established around the wetland’s pool.

“We are really excited about what it will look like in a few years, and our kids think it’s wonderful, too,” he said. 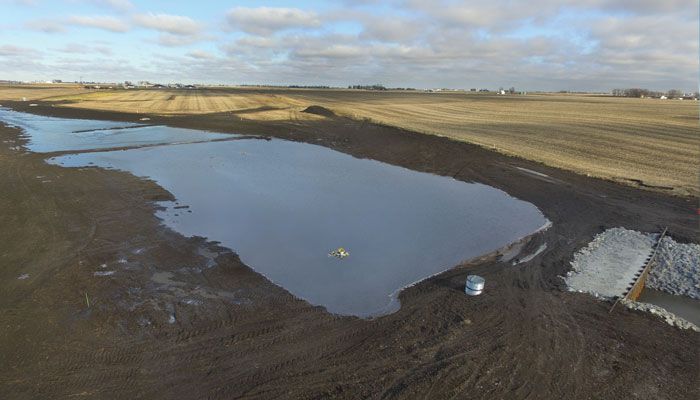 An aerial view of Denny Lyle's newly built wetland on his farm near Keota. Pollinator mixes have been seeded in the area around the wetland pool and will provide added water quality and habitat benefits as they mature.
SUBMITTED PHOTO