Just when you think you have things figured out, new information comes forward and proves you were wrong. Maybe it all comes down to where you started your search for answers. 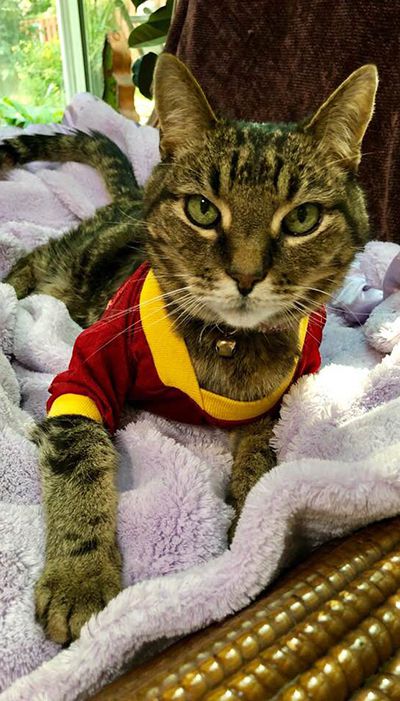 I found this out just a short time ago, after bringing our cat home from the veterinarian. We adopted ‘Sunshine’ (pictured here) 15 years ago and paperwork identified her as a ‘spayed female American Tabby.’ We bought her a fancy pink collar and took her on yearly exams. Not long ago, she spent a week in an animal hospital in treatment for hyperthyroidism: tons of tests and labs and careful monitoring, and she’s just fine.

Now facing bladder stones, it turns out all those experts and years of annual physicals overlooked one essential truth; ‘she’ is a ‘he.’ Yep, our ‘Sunshine’ was misidentified as a female for more than 15 years!

That’s when it occurred to me that a lot of smart people with good intentions can make mistakes. It’s certainly the case when it comes to diet and exercise.

Jennifer Lopez (JLo) recently roped ‘Today Show’ host Hoda Kotb into accepting a ’10 Day Challenge’ diet of no carbs, no sugars, no caffeine. Millions, no doubt moved by the undeniable charisma and physical appeal of ‘JLo,’ joined in. Never mind that this diet wasn’t designed by a dietitian or even a doctor of any kind. It’s the brainchild of JLo’s trainer, a muscle guy with a law degree and a roster of Hollywood clients, hawking food and fitness products.

It seems one celebrity after another is promoting the lifestyle of omission: no meat, ‘No GMO,’ no carbs, no sugar, no fat. Their source of information isn’t based on medicine or even an expert close to the source. Which is too bad, because your local farmer knows more about farming and your local doctor or dietitian knows more about healthy food choices than JLo or other lifestyle promoters who have enviable talent and beauty, but no background in science or medicine. Same goes with Gwyneth Paltrow (who studied anthropology but didn’t graduate) or Alicia Silverstone.

It’s not just Hollywood stars who influence our diet decisions. It’s labels. I support all choices, but a couple of my friends who shop Whole Foods have been fooled into thinking they’re making a healthier choice for their families by buying ‘slow growing chickens.’ These are birds touted to be tastier, better for you and the environment because they don’t grow as fast. Except of course, none of it is true!

That’s what I learned from Dr. Alison Van Eenennaam of U.C. Davis, who has her doctorate in Animal Biotechnology and Genomics. I interviewed Dr. Van Eenennaam for our ‘Spokesman Speaks’ podcast and asked her about slow-growing chickens and claims made on labels. She says ‘slow growing’ chickens are an example of ‘fear based’ marketing to promote one product over another. “They state they’re healthier and more flavorful, but they don’t have any data to back that up. Basically, these chickens are around about 14 extra days, because they grow less quickly than other chickens, but nothing else about the life of the chicken changes. They eat the same food, in the same amount, in largely the same environment. All they’re doing is walking backwards from what geneticists have been trying to do for the last 50 years and that’s had a negative impact on costs. It’s more expensive for the farmer, it’s more environmentally degrading, and it’s done nothing for the chicken. It’s a double-lose when it comes to sustainability, for no benefit. “

Van Eenennaam sees the same thing when it comes to other food labels that use fear to fool consumers into buying their product. “Marketers who touted ‘no rBST’ milk had a short-term market advantage until the technology was removed from the market due to fear-mongering and no dairies were using it. But, that means we have less productive cows, so we need more of them to produce the same amount of milk. The trade-off is a 7 percent increase in greenhouse gases for each glass of milk, compared to what we used to have when that technology was embraced,” says Van Eenennaam.

And don’t even get her started when it comes to anti-GMO marketers. “It’s just the biggest consumer hoax there is, because you put a label on something that was never GMO in the first place. I can think of many examples--fruits and vegetables or beans and there’s that butterfly on there, claiming it’s ‘GMO-free’ and that’s a product that couldn’t have been genetically modified. There will be a price elevation because marketers are claiming it’s ‘better for you’ because it’s non-GMO. That’s garbage to start with, and why is it more expensive? It wasn’t GMO in the first place!”

He scoffs at a recent study promoting a 90 percent reduction in red meat in our diets, based on claims that livestock farming is bad for the environment. While none would be surprised that the livestock industry would disparage the study, Mitloehner, who has decades of experience in engineering and Animal Science, says he’s crunched the numbers and determined that cutting out red meat in your diet will do nothing to reduce your carbon footprint.

“Globally, livestock contribute to 14.5% greenhouse gases. A common practice of livestock critics in the U.S. is to conflate global versus national statistics regarding sources of greenhouse gas emissions and their carbon footprint. In the U.S., direct greenhouse gas emissions from the entire livestock sector are 3.8 percent while transportation emissions are 26.4 percent of the total. If we were to completely switch to a vegan lifestyle, we would see a reduction of 2.6 percent in GHG’s throughout the U.S.” Big enough to measure? Yes. Big enough to matter? No. “But, what would happen is it would create a food supply incapable of meeting the nation’s nutritional requirements. Meat has essential vitamins, minerals, fatty acids and amino acids that are hard to find in plant-based diets, or with supplements,” says Mitloehner.

Dr. Van Eenennaam, who eats red meat but also thinks people need a lot more fruits and vegetables in their diets, agrees. “The thing that concerns me the most as a scientist is there are marketing decisions being made by these people that are actually going counter to what I think are the shared values of most consumers. Most consumers obviously want safe food, that’s not even negotiable, but they would like it to be raised in a sustainable way, with the lowest environmental footprint. And yet, they’re being marketed as products that are being raised in a very inefficient way and being told that’s more sustainable. There’s a contradiction there.”

You’ll certainly find a lot of contradiction online! So, I know if I want diet advice or an opinion on the nutrition of a certain product, I don’t start with Google; I seek out a dietitian I know who has a long, proven track record in the field of food science. If I want medical advice, I ask my doctor. And if I want information on farming methods or livestock well-being, I ask a farmer. Sure, we can all admire Jennifer Lopez for her talent and style, but let’s face it; most of her beauty comes from genetics, not a fad diet or fitness guru, out to sell his own products.

Bottom line: if you begin your search for answers closer to the source, sometimes the truth is just an easy ‘tail lift’ away.