But it was the agricultural potential of Brazil that made the biggest impression on participants during the nine-day IFBF study tour, which ended March 8. The Iowans saw the vast potential of the Amazon River for transporting soybeans and other crops. And they viewed clear evidence of Brazil’s dedication to improve the country’s long-deficient transportation in­­fra­structure.

Those two factors are making Brazilian farmers even more competitive in global markets for soybeans, and increasingly corn, the Iowans said.

“The Amazon is a very big leverage point for Brazilian farmers,” Woodbury County Farm Bureau member Eric Nelson said after visiting a grain loading terminal in the northern city of Santarem. “We have an antiquated and outdated barge transportation system on the Mississippi River, and they can take ocean ships a thousand miles right up the Amazon. That’s a huge advantage.”

The size of the Amazon, and all of its tributaries, are hard to imagine until you see it first-hand, said Brian Carlson, a Benton County Farm Bureau member.

“I had already heard a lot about the terrible roads in Brazil, but the size and the depth of the Amazon was pretty stunning,” he said. “The Mississippi really seems tiny by comparison.”

Mark Guy, a Franklin County Farm Bureau member, agreed. “I guess I’ve always thought of the Amazon as looking like a regular river, like the ones we have in the states,” he said. “But it’s really a major waterway that is easily big enough to handle ocean-going ships.”

Brazil’s efforts to improve its logistics also caught the attention of the IFBF study tour participants, who started their travel in the Amazon port of Manaus and worked their way south to Cuiaba, the capital of Mato Grosso. Brazil’s government recently finished paving portions of a highway, called BR-163, to connect Brazil’s soybean-growing heartland to river ports near the Amazon River. The improved two-lane road, along with plans for a railroad and other upgrades, is expected to sharply reduce the cost of shipping soybeans and other crops for Brazil’s farmers.

“I’d say their logistics are going to get better and better over time as they pave more roads, and upgrade shipping and build railroads,” said Tony Adrian of the Jefferson County Farm Bureau. “It really looks like they are planning to be a leader in the ag export business for the long term.”

Seeing the gains in Brazil highlights the need for improved infrastructure in Iowa and all over the Midwest, said Nic Shearer of the Fremont County Farm Bureau. Shearer, from Hamburg, witnessed the devastation to transportation infrastructure from severe flooding along the Missouri River in 2019.

“We really need to keep working to upgrade out infrastructure,” Shearer said. “Not just the waterways but the roads and bridges too.”

“Yeah, they have logistics issues here,” he said. “Those can be fixed, and they are working on that. But you can’t change the climate, and what they have here is a big advantage for them.”

That ability to raise at least two crops a year, usually soybeans followed immediately by corn or cotton, provides Brazilian farmers a distinct advantage over farmers in the United States, said Beth Baudler, an Adair County Farm Bureau member. “It allows them to spread the cost of land and machinery much better than us,” she said. “That’s a big thing.”

“I’ve really been surprised about their attitudes and about how they accept new technology and practices,” Stephas said. “I think they are able to incorporate things like no-till and cover crops fast because agriculture is so new here and they don’t worry about perceptions on how things were done in the past. They just see the value and go for it.”

Despite all the differences of Brazilian agriculture, the Iowa visitors said they saw many similarities with things back home. The farmers they met in Brazil, like their Iowa counterparts, were concerned about protecting the environment and are worried about a growing amount of government regulation, rising taxes and the unsettled world markets.

Farmers in Brazil also place a lot of value on relationships, Baudler noted.

“It really surprised to me to see how similar farmers here and those in Iowa are alike when it comes to relationships we have with suppliers, consultants and others in the community,” she said. “We could see that in Brazil those relationships are critical and really just as important as producing the crop itself.” 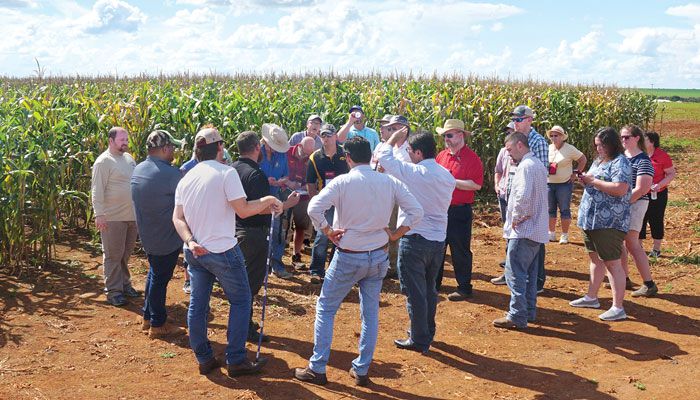