For five decades, Dr. Maynard Hogberg worked to build and develop strong research and academic programs at two of the most prestigious and internationally- recognized animal science departments, in addition to serving in countless agriculture advisory committees and boards.  Charlie Good has been a staple of rural Iowa with over 35 years as an auto repair mechanic, small business owner, and a leading advocate for renewable fuels benefiting Iowa farmers.

The Distinguished Service to Agriculture award honors individuals who have played a significant role in the agricultural industry at the local, state and/or national level.  This is the 38th year for the service award.  The two winners received plaques honoring their achievements and will be added to a permanent display at the IFBF headquarters in West Des Moines.

Dr. Hogberg’s renowned career as an agriculture educator began in 1966 as a vocational agriculture instructor with the Ida Grove Community School District in northwest Iowa.  Hogberg later served as chair of the Department of Animal Science at Michigan State University (MSU) and later held the same position at Iowa State University (ISU) before retiring in 2015 with a half century of service as an ag instructor.

Dr. Hogberg was named chair of the Animal Sciences Department at MSU by his colleagues at the age of 40, and held the post for 18 years.  Under Hogberg’s leadership, the program grew exponentially and many in the MSU community refer to Hogberg’s service from 1984-2002 as the “golden era” of animal science at the university.

The Red Oak native returned home to Iowa in 2003 to serve as chair of ISU’s Animal Science Department, a position he held for 12 years before moving to emeritus faculty status in 2015.  During his tenure at ISU, the university’s Animal Science Corridor, an area devoted to livestock education, grew tremendously.  Dr. Hogberg also helped lead the development of a new $15 million state-of-the-art dairy farm in 2007, and also assisted with the development and construction of the Jeff and Deb Hansen Agriculture Student Learning Center, a $7.9 million facility built almost entirely on gifts from hundreds of friends, alumni, and supporters.

Dr. Hogberg’s charismatic presence, well-articulated vision for science-based improvements in livestock production, and his development of public-private partnerships to achieve shared goals is the reason why many in the animal science field consider him the “dean” of animal science leaders nationwide.       In addition to a career educating collegiate animal science students, Dr. Hogberg often shared the message of agriculture with policymakers in Washington, D.C.  In 2012, Hogberg identified the need for a greater voice in Washington, D.C., and was a leader and co-founder of a lobbying group, the National Association for the Advancement of Animal Science.  He served as president-elect of the association until his retirement in 2015.  Today, the organization represents departments of animal science, dairy science, poultry science, and large animal veterinary medicine, as well as livestock organizations to support increased funding for animal agriculture research.

While Hogberg fondly reflects on his illustrious career, he wishes he had access to the communicative tools available today.  “I wish I were younger,” Hogberg explains.  “The new technology in the industry and ability to reach consumers is very exciting for the future of agriculture.”

Charlie Good (pictured below), a well-recognized business owner and strong advocate for Iowa’s renewable fuels industry, was nominated for the distinguished service award by the Story County Farm Bureau for his many years as an effective spokesperson for agriculture.

Good is known by many for his 35 years of service as an auto repair mechanic and active member in the community.  With several decades as an ASE-certified mechanic and board member of the Petroleum Marketers Retail Committee, Good used his unique background to speak out in support of Iowa’s renewable fuels industry, particularly Iowa-produced ethanol products including E15, E20, E30, and E85. 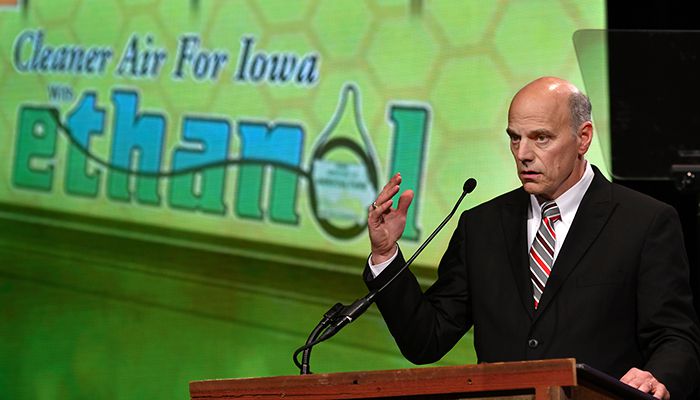 As a nationally-recognized advocate for renewable fuels, Good has regularly helped consumers understand the difference between crop production for renewable fuels versus crops raised for food, an important distinction that is confusing for many.

Good regularly traveled to Washington, D.C. to lobby for a strong Renewable Fuel Standard (RFS) and expanded markets for ethanol and biodiesel products.  Reflecting back on his lobbying efforts, Good is pleased he took the time to share his expertise and advocate for renewable fuel.

“I was very proud to represent Nevada and represent Iowa,” Good says.  “It was shocking to me that a little guy from Nevada, Iowa, could actually make a difference on something so important in Washington, D.C.”