Margins in the Beef Supply Chain

Many agricultural industries, especially livestock industries, have become vertically integrated.  The beef industry is not one of those industries with cow-calf producers, feedlots, packers, and retailers for the most part operating as separate entities.  This puts more focus on margins at various stages of the beef supply chain compared to other agricultural commodities.  Moreover, the COVID-19 pandemic had large impacts on the beef supply chain bringing even more focus to price spreads within the beef industry.  This article examines price margins between feeders and fed cattle, fed cattle and wholesale beef, and wholesale beef and retail beef.  All margins discussed are gross margins, not profit margins.   Costs for each group in the supply chain are not included in the gross margin and would need to be accounted for to calculate profit margins.

The first major margin in the cattle supply chain is the margin between the price cow-calf producers receive for feeder cattle and the price feedlots receive for fed cattle, or the feedlot margin.  The prices of feeders and live cattle are shown in Figure 1 on a live basis.  Feeder cattle prices are adjusted by a factor of 2.25 to convert to a live fed cattle basis.  The feedlot margin is also given.  The feedlot margin has been fairly consistent, fluctuating between $20 and $50 per hundredweight over the past 20 years.  The margin was lowest around 2015, when U.S. cattle numbers were nearing the end of a herd reduction period.  Total U.S. cattle and calves peaked over 130 million in the 1970’s but decreased slowly after that (Figure 2).  Total cattle and calves in the U.S. went as low as 88 million in January 2014, a level not seen since the 1950’s.  The low cattle numbers lead to higher beef prices, creating more demand for feeder cattle, and limiting the margin between feeder cattle and fed cattle.  Higher beef prices also brought a new herd expansion period beginning in 2015. 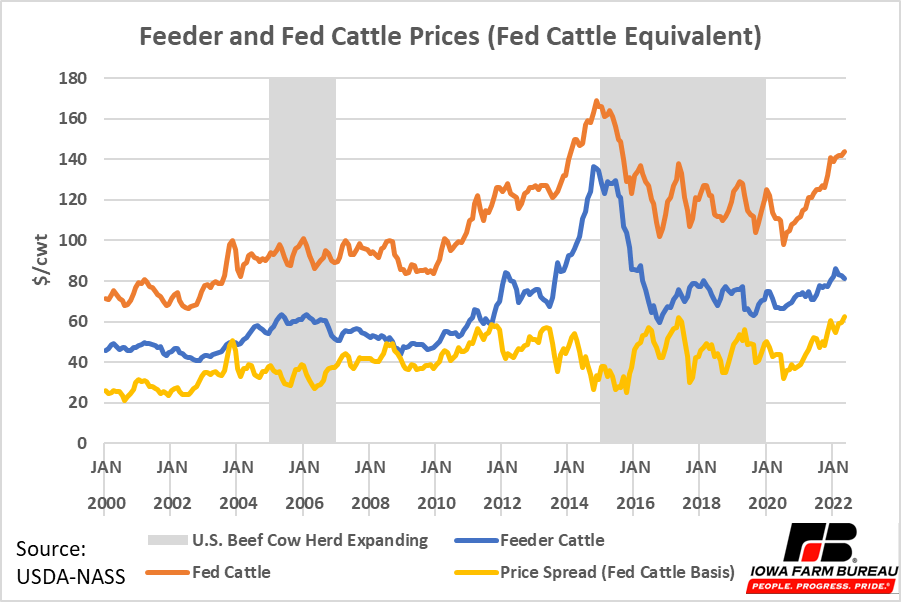 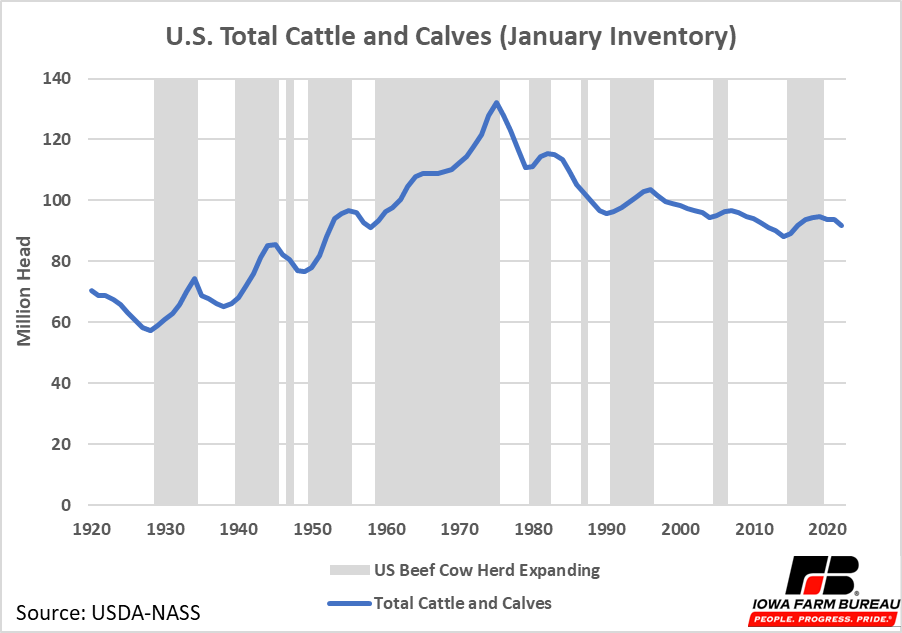 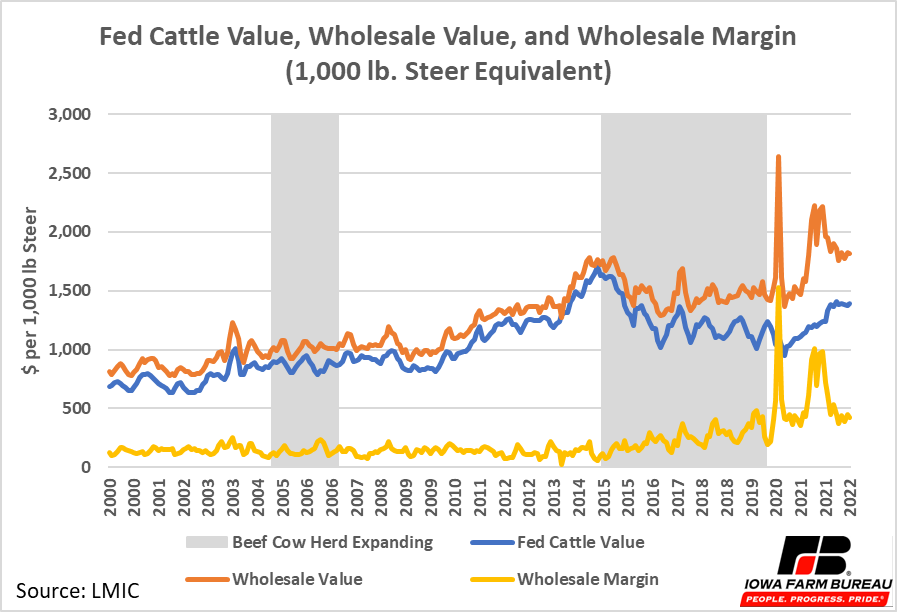 Increases in the wholesale margin can occur for a variety of reasons.  Market power is one possibility that is commonly suggested.  The beef packing industry is extremely consolidated with four firms controlling over 80% of the market, and packers could be using market power to increase their margins.  However, other factors could also raise margins in a competitive market.  For example, if costs across the whole packing industry increase, prices rise to offset these additional costs.  No market power is present, yet prices and gross margins still rise.

Let’s start by examining market forces in Period 1.  Previous decreases in slaughter capacity and an expanding in the cattle herd are likely explanations for the gradual increase in the wholesale margin during this period.

As the U.S. cattle inventories change, packers are expected to adjust their capacity.  In a competitive market, packers would like to have just enough slaughter capacity to handle all available cattle.  Excess capacity would mean unused space, under-utilized labor resources, and a higher fixed cost per head.  A lack of capacity would lead to plants running at very high levels of capacity utilization and more hours on weekends with higher costs such as additional overtime hours.

As noted earlier, U.S. January cattle inventories peaked over 130 million head in the 1970’s and put in a recent low of 88 million head in 2014 (Figure 2).  As the U.S. herd declines packers slowly decreased total capacity.  Then the herd then went through an expansion period from 2015 to 2019 and reached around 95 million head.  The beginning of the expansion period coincides with the beginning of Period 1, which is when the wholesale margin began to increase. 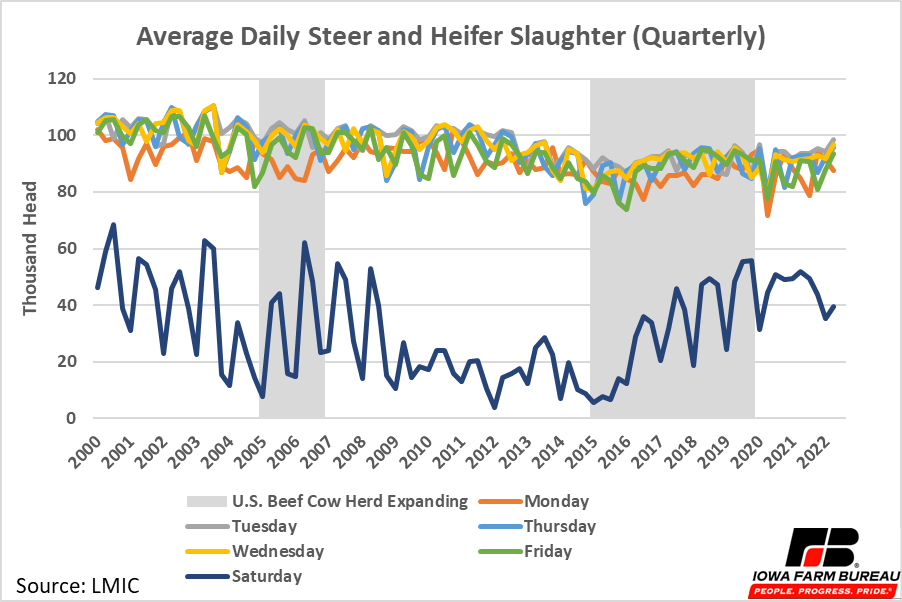 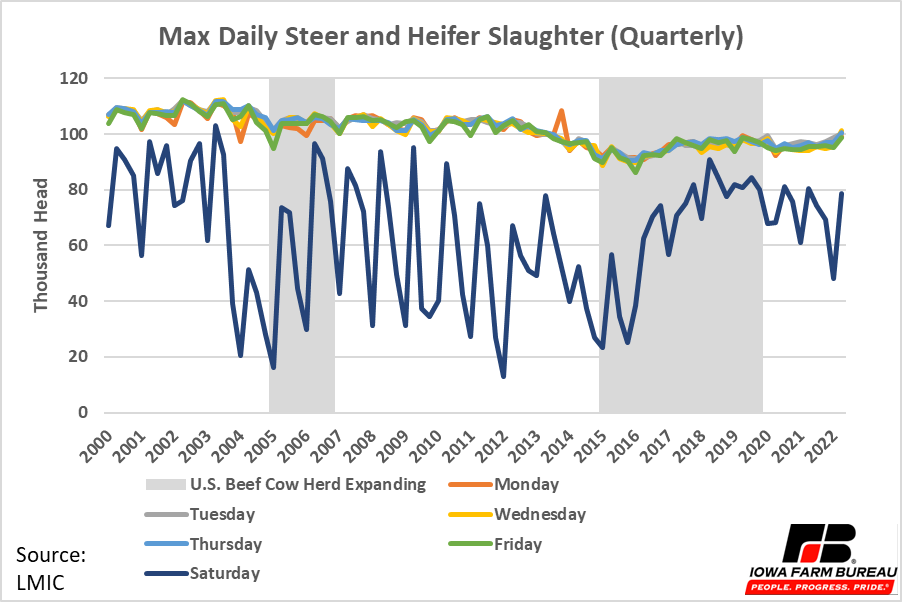 In 2015, the packing industry likely had reduced slaughter capacity enough that the cattle expansion cycle in 2015 eventually led to packers operating over capacity for the first time in many years.  This is supported by the fact that Saturday slaughter increased in 2016, shortly after the expansion period began, but weekday slaughter did not.  This also coincides with the time the wholesale margin began rising suggesting the margin increased at least in part, due to increased costs from operating over normal capacity.  Prices paid for beef remained the same while increased costs incurred by the packing industry were passed along the supply chain, resulting in a higher wholesale margin.

When a firm is using market power, quantity is expected to decrease when margins increase.  But, when firms are operating competitively and facing increased costs from over-capacity operations, margins are expected to increase when quantity increases.  Figures 6 & 7 show the relationship on a weekly basis between the wholesale margin and steer and heifer slaughter capacity utilization and percent of total steers and heifers slaughtered on Saturday.  Slaughter capacity utilization was estimated by taking total weekly slaughter divided by the maximum Monday-Friday slaughter during the previous year.  It is not a perfect measure but does show general trends in cattle slaughter over time.  Notice the trend lines in Figure 6 & 7 both slope up from left to right.  This means as both capacity utilization and Saturday slaughter increase, the packer margin increases, which is more consistent with a market with capacity constraints than a market with market power. 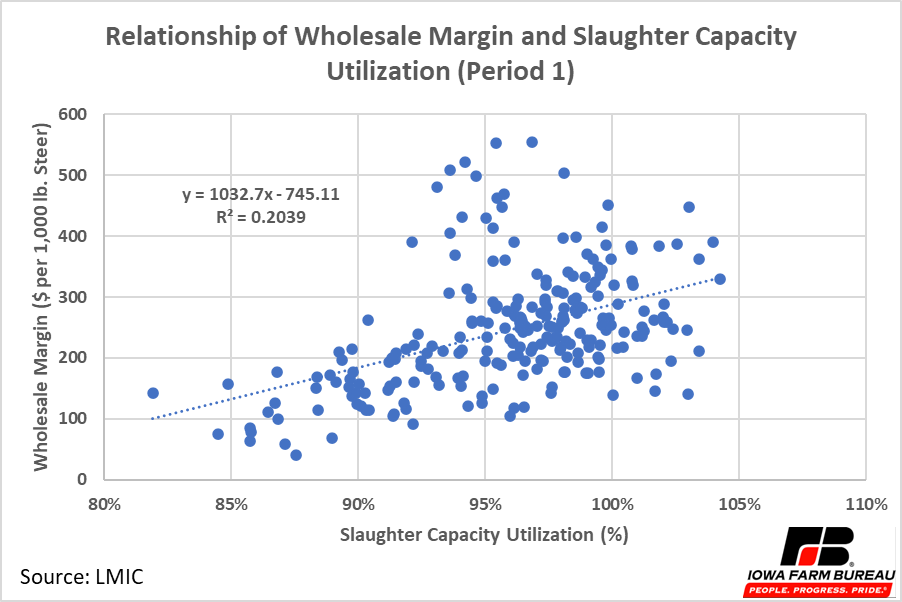 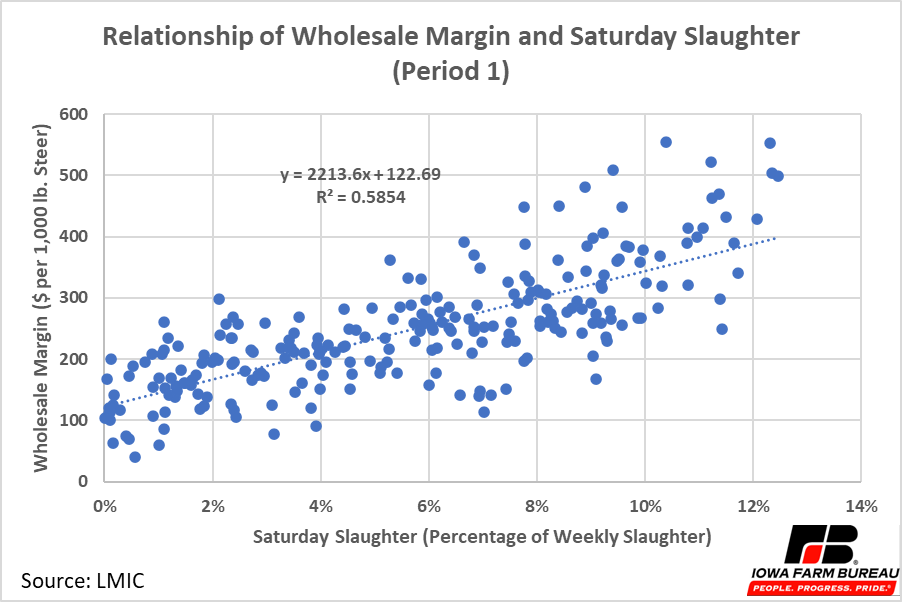 Moving on, the most extreme spike in the wholesale margin occurred in Period 2.  The marketing channel disruptions of the COVID-19 pandemic were likely the primary contributors to this large spike.  At the beginning of the COVID-19 pandemic, many packing plants saw reduced throughput and some temporarily shut down as workers became infected with COVID-19.  U.S. cattle slaughter was reduced dramatically.  A reduction in throughput raises a packer’s fixed costs on each animal for packing plants as there are less animals to spread the fixed costs over.  Increased fixed costed were passed onto the retailers in the form of higher prices.  Also happening at this time were major disruptions in marketing channels with significant increases in demand for beef packaged for retail sales and less demand for beef packaged for hotel, restaurant and institutional (HRI) sales.

Figures 8 & 9 show the relationship between the wholesale margin and steer and heifer slaughter capacity and Saturday steer and heifer slaughter in Period 2.  Unlike Period 1, the trend lines for Period 2 slope up from right to left, indicating that as slaughter capacity and Saturday slaughter decrease, the margin increased.  Remember, when market power is present, typically quantity falls and price rises because the producer, in this case the packer, choses to lower production or raise price.  Given the short-term market effects created by COVID-19, it seems unlikely that market power was the cause of this spike in the wholesale margin.  Disruptions caused by the pandemic forced packers to lower production.  This created additional costs for packers which caused the wholesale margin to increase, but also caused favorable short-term market conditions.  The supply of processed beef packers had to sell fell because packers could not process as many animals, which caused prices to rise.  Furthermore, less cattle were able to be slaughtered.  As the supply of cattle available to slaughter rose, this put downward pressure on the fed cattle prices, so fed cattle prices did not climb with wholesale prices.  As packers worked through the pandemic and began operating at full capacity again, wholesale margins fell back to previous levels as the supply of wholesale beef expanded the supply of cattle available for slaughter was slowly reduced,

In short, the large spike in Period 2 was likely due to a combination of increased costs experienced by packers and favorable short-term market conditions.  Market power likely was not a factor in this period as packers reduced capacity because they had to, not because they chose to. 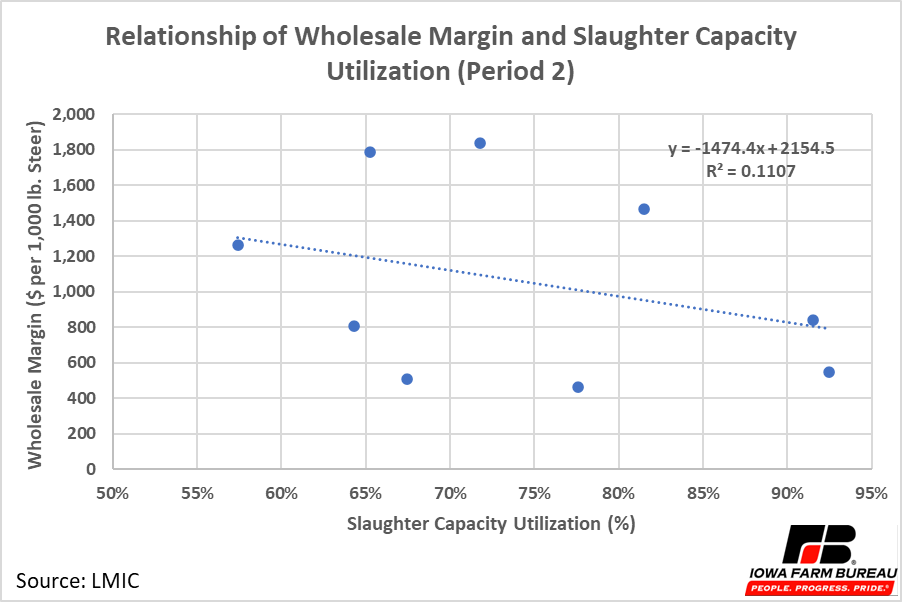 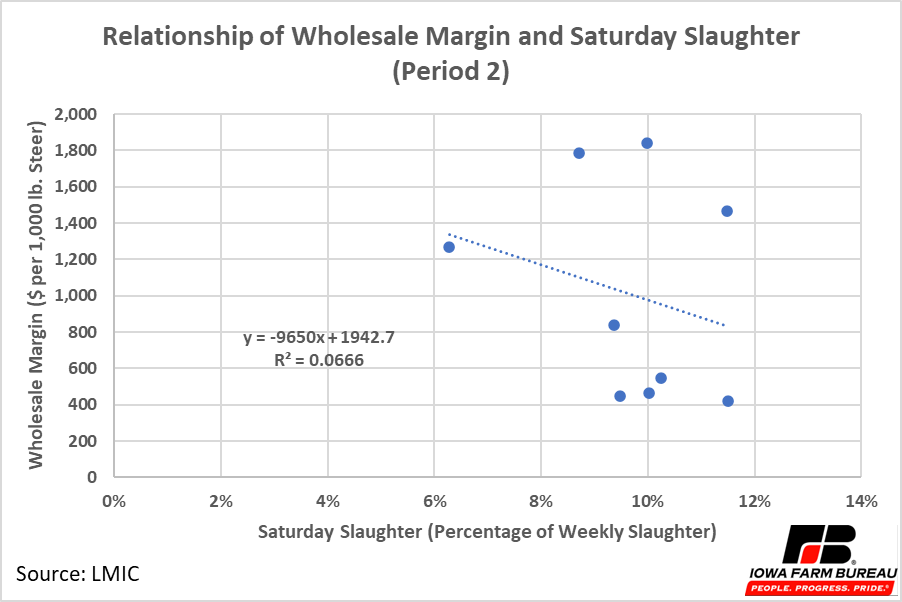 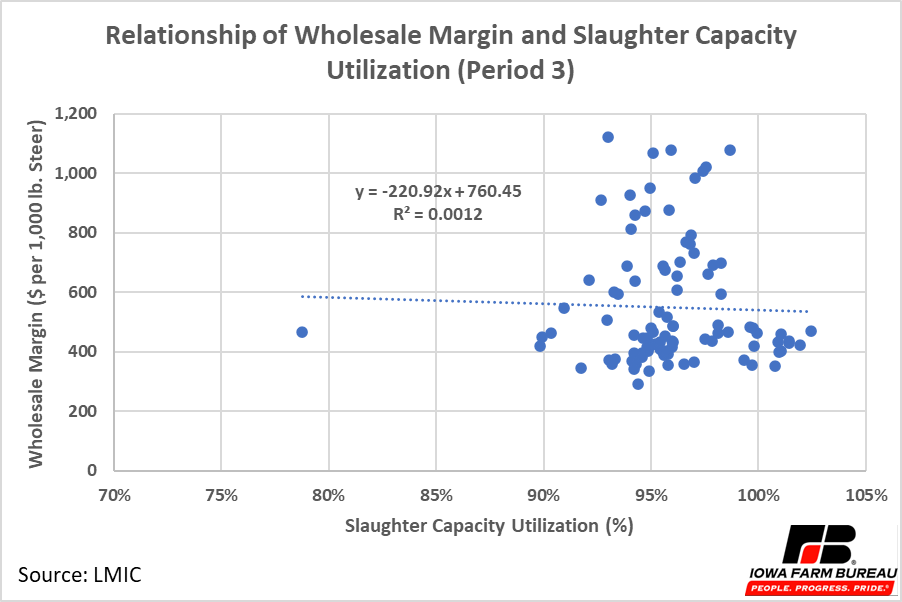 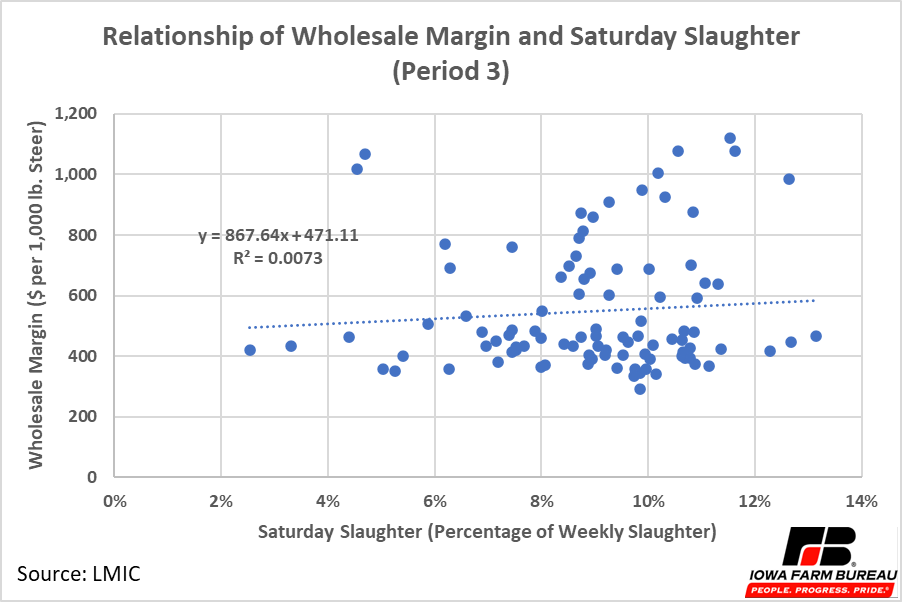 After examining the wholesale margin in three separate periods there are a few important conclusions to outline.  Reduced slaughter capacity, the pandemic, and inflation were all likely contributors to increases in the packer margin.  These factors do not mean no market power exists in the beef packing industry, but they do illustrate other factors outside of market power can cause the wholesale margin to increase.  Previous economic research confirms some market power does exist in the packing industry. As noted in a Texas A&M University report, “While not necessarily a popular position, most economic research confirms that the benefits to cattle producers due to economies of size in packing largely offset the costs associated with any market power exerted by packers. Research indicates that there is market power, but its effect has been small.”1 (cattle.pdf (tamu.edu)). 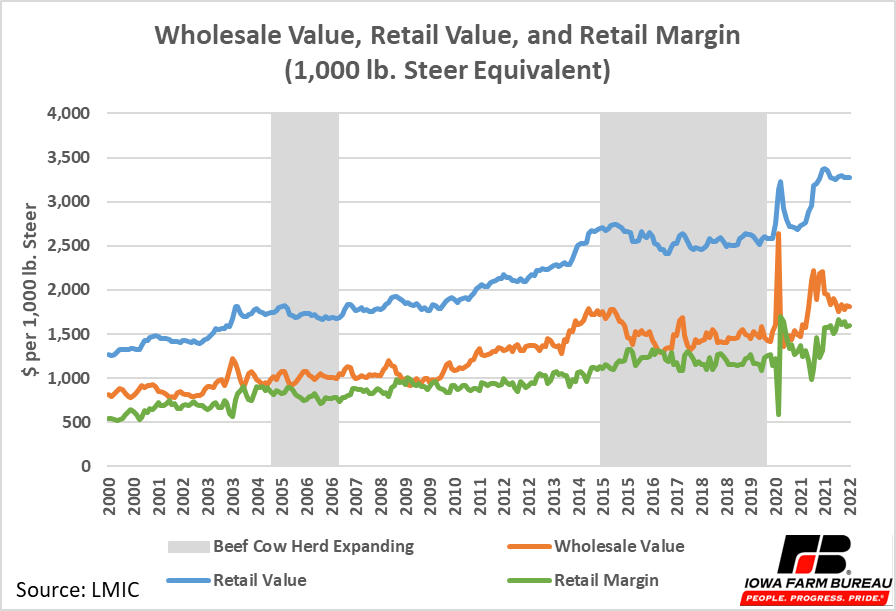 From 2015 to 2020 before the pandemic, the retail margin was fairly level, moving between $250 per hundredweight to $300 per hundredweight following fluctuations in the wholesale margin that were occurring at the same time.  When the pandemic hit and wholesale prices for products destined for retail trade rose significantly due to reduced slaughter throughput as discussed earlier, retailers were not able to pass all their additional costs to consumers and their margins fell.  When wholesale prices fell, the retail margin increased again.  The next time wholesale prices increased significantly in 2021, the retail margin also fell for a brief time but then increased as retailers raised prices high enough to cover the additional costs of wholesale beef and other inflationary cost pressures.  Moreover, when wholesale beef prices declined after the spike in 2021, retail prices remained relatively constant, leading to a higher retail margin.