Livestock on the move

Many Iowa farmers are considering adding livestock to their operations to boost their income potential. Zack Smith, a fifth- generation farmer near Buffalo Center in Winnebago County, is taking the livestock proposition a few steps farther.

Smith and his partners are experimenting with adding four species of livestock — sheep, goats, pigs and chickens — right into one of his northern Iowa fields.

Smith, working with Minnesota farmers Sheldon Stevermer and Lance Peterson, has developed a new agricultural production system called Stock Cropping. Stock Cropping is made possible with the design and construction of a mobile barn called the ClusterCluck 5000. They situated the wheeled barn in a field planted in alternating strips of 12 rows of corn and 20 feet of annual pasture. The farmers move the barn along the pasture strip twice a day, 11 feet at a time, using a winch system.

The idea behind the Stock Cropper, Smith said, is a creating a “biological hack” that can provide agronomic, economic and environmental advantages for farmers interested in increasing profitability and diversity on their farms. They wanted a system that is diverse, scalable and creates attributes that are in demand from consumers.

“We are looking for ways to find an advantage in the market,” said Smith, a Winnebago County Farm Bureau member and a Pioneer seed dealer. “We aren’t interested in scaling acres as the answer to stay in business, so we want to find a different way to be profitable and add diversity to the northern Iowa landscape.”

Over the winter, Smith, Stevermer and Peterson used computer-aided design (CAD) to sketch out a movable livestock barn system.

The mobile barn houses the livestock as well as feed troughs and waterers. It provides the animals a constant supply of fresh pasture with a mix of species, including forage rape, cow peas, annual rye, oats and sudangrass, as well as room to move around and get fresh air.

The sheep and goats have the front door and get the first chance at the pasture. “They act as lawnmowers, cutting down the pasture to a target of 4-6 inches,” Smith said. 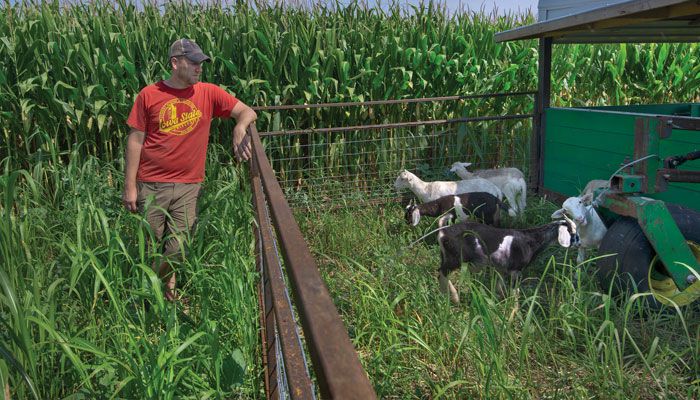 (Photo above: Zack Smith checks on the sheep and goats in his mobile barn that's part of the Stock Cropper system he helped develop and is using on his farm near Buffalo Center in Winnebago County. Smith calls the system a "biological hack" that can provide agronomic, economic and environmental advantages for farmers. PHOTO / GARY FANDEL)

Next, the pigs take their turn, moving out of the barns’ back door. They are allowed to browse the remaining pasture and disturb the soil with their snouts and hooves.

Finally, the chickens follow in their low-lying coop that is set several feet behind the mobile barn. They peck through the pasture scarfing up seeds, insects and larva.

The farmers would also like to find a way to add beef production to the system eventually.

When the barn reaches the end of the pasture strip, the farmers simply wheel across the end row and onto the next pasture strip. Then the process starts all over again.

Stevermer’s ag engineering background has come in handy in designing the mobile barn and adding sustainable elements, Smith said. For example, the barn has an inverted roof that  captures rainfall and pipes it down to pen’s water tanks. Any overflow water is distributed out into the field so it can be utilized by the crop.

The farmers plan to rotate the field next year, planting crops on this year’s pasture ground and using this year’s cropland for next year’s annual pasture. “I really believe we’ll be able to save on both tillage and fertilizer and we’ll get additional microorganisms that will help the crops and the soil,” Smith said.

They plan to keep the mobile barn in place until late October or early November, allowing the pigs and sheep to reach market weight.

Along with adding livestock, the farmers are experimenting with their cropping systems on the field. They have planted heavier populations and higher performance hybrids outside two rows of their 12-row corn strips.

“We have built a sunlight corridor so the rows on the edge get more light. Because of that, we hope to be able to increase our corn yields as well,” Smith said.

The “four-ring circus,” as Smith calls their experiment, is attracting a lot of attention both from locals, farmers in other states and around the world as they chronicle their experiment in weekly video updates on YouTube. They also regularly livestream on Facebook at www.facebook.com/The-Stock-Cropper.

They’ve had a steady stream of visitors, both in person and virtually, and will host a Field Day Sept. 10 at 2 p.m. at their site near Buffalo Center.

In time, Smith envisions scaling up to having several Stock Cropper mobile barns in a field raising animals through the season. The grain raised, he said, would all be used to feed animals.

“I want to eventually get to a place where the only thing that leaves the farm is the meat,” Smith said. “Consumers are willing to pay for livestock raised outdoors on pasture in a truly regenerative fashion, and we feel our system can satisfy that need.”