Iowa’s friendship to Japan stands the test of time 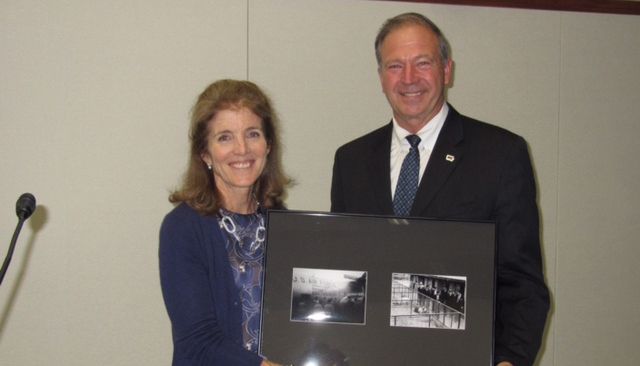 A gesture of friendship and caring from Iowa to Japan—in the form of a couple dozen breeding hogs and some sacks of feed—has stood the test of time. And, as a group of Iowan farmers found out recently, the aid effort 56 years ago is renowned at the highest levels of U.S. diplomacy in Japan even today.

Iowa farmers led the hog lift in 1960 to help the people of Yamanashi Prefecture, who had suffered from devastating typhoons. The Iowans sent 35 breeding hogs and 100,000 bushels of corn to help restore the area’s livestock population, provide a lasting food source, and maybe most importantly, give hope to needy people in a far-off land.

The photograph of the hog lift thrilled Ambassador Kennedy.

“Oh my god, these are pictures of the pigs,” she exclaimed as Hill unveiled the photo of the Yamanashi hog lift. "I think the hog lift was about the first thing I heard about when I got to Japan.”

Ambassador Kennedy noted, correctly, that almost all of the pigs in Japan today can be genetically traced to the 35 breed hogs flown in from Iowa. And she added, “This is such a great gesture of caring and has made our relationship with Japan so much stronger.”

Today, Japan is a strong ally of the United States and a key trading partner. Iowa in 2015 exported more than $1.1 billion in products to Japan, with agriculture products leading the way.

And the future for added exports to Japan is bright, especially with the potential that the Trans-Pacific Partnership or TPP, could significantly reduce tariffs on American pork, beef and other products.

Kennedy noted that the Iowa Farm Bureau visit will mean a lot in Japan, a country that highly values face-to-face contact and building personal relationships. And, she made sure that Hill provided her the detailed background of the Yamanashi hog lift. “When I hang this picture in my office everyone is going to ask about it and I need to be able to tell them.”

These simple gestures are commonplace in Iowa’s rural landscape and the Farm Bureau members visiting Japan could clearly see that sincere gestures of caring, no matter how long ago and how far away, still have a powerful meaning over the decades.