In another move to combat rising inflation the federal reserve raised the target federal funds rate by 0.75% on September 21, 2022.  This follows increases of 0.25% in March, 0.5% in May, 0.75% in June, and 0.75% in July.  The federal funds target rate began the year near zero and is now set to a target range of 3.0% to 3.25%. If inflation continues to persist in the market further interest rate hikes are expected.

A common measurement of inflation are consumer price indices, which measure changes in prices over time. Two common CPIs used are the “all items CPI”, which includes all items measured by the U.S. Bureau of Labor Statistics and the “all items less food and energy CPI”, which excludes food and energy. Food and energy are historically more volatile than other retail items due to rapidly changing supply and demand dynamics. Comparing the two allows one to see what effect the potential volatility of these categories has on calculated inflation.

The two indexes are shown in Figure 1. Inflation is typically targeted around 2%, as moderate inflation typically does not hurt the economy and is thought to be better for a robust economy than the risk of deflation. The last time inflation was in the target range was early 2021.

It is also important to note if increases or decreases in year-over-year numbers are occurring. The year over year change in all items index has decreased slightly the past two months. However, as noted earlier food and energy can be volatile. The all items less food and energy index, has increased during the last two months, indicating inflation is still occurring in most expense categories. 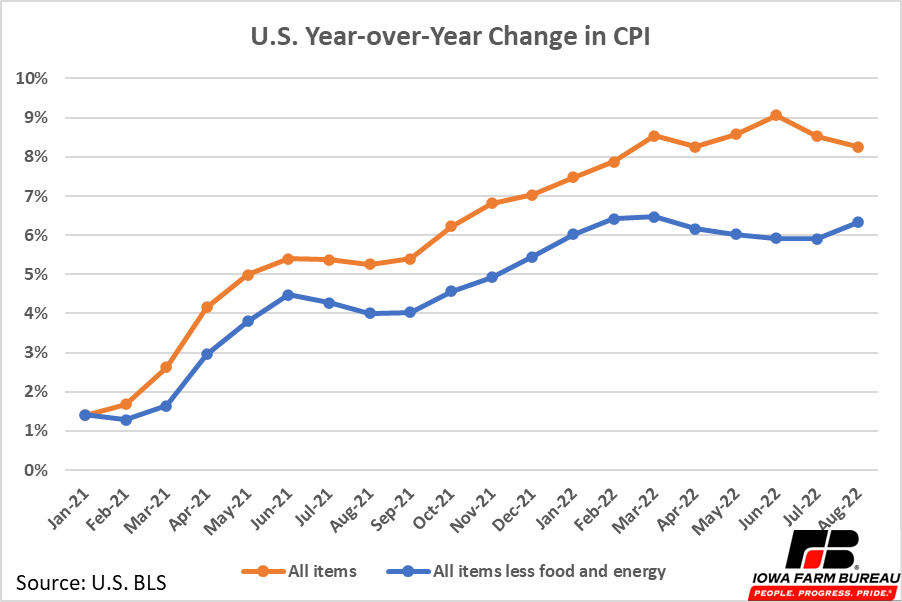 In Figure 1, the all items less food and energy CPI showed an increase while the all items CPI showed a decrease. This happened because energy prices, including gasoline and oil, declined in August. Retail food prices on the other hand have continued to climb, but the increase in food prices was offset by larger losses in energy prices when both were removed from the index.  In August 2022, retail food prices were up 0.8% compared to July 2022, and up 11.4% year-over-year.  Grocery store prices have increased faster than restaurant prices, up 13.5% year-over-year compared to 8%. However, restaurant prices are still more expensive than grocery store prices.

Eggs and fats oils have seen the largest increases in prices amongst retail foods.  Eggs are up 2.9% from last month and 39.8% compared to a year ago.  HPAI continues to impact the layer industry. Iowa has not seen new cases since May 2022, but new cases continue to be identified, most recently in September in various states including Minnesota, Wisconsin, and Ohio.  Egg prices will likely remain elevated until detection of the virus stops, and layer inventories return to more typical levels.

Some month to month decreases in retail food prices did occur between July and August.  Retail meat prices, for example, look to be decreasing. Meat prices (excluding poultry and fish) are down 0.2% from last month but are still up 6.7% from a year ago. Comparing only the year-over-year numbers it appears meat prices are increasing slower than the all-food CPI, but this is a little misleading.  Looking back two years instead of one, meat prices have increased at almost the same rate (Figure 2).  Meat prices increased faster than the all-food CPI from August 2020 to August 2021 and then slower than the CPI from August 2021 to August 2022. The point of comparison is important to keep in mind when looking at inflation. While a recent slowdown in price increases has occurred, retail meat prices remain well above levels prior to the beginning of the inflationary period in the U.S. 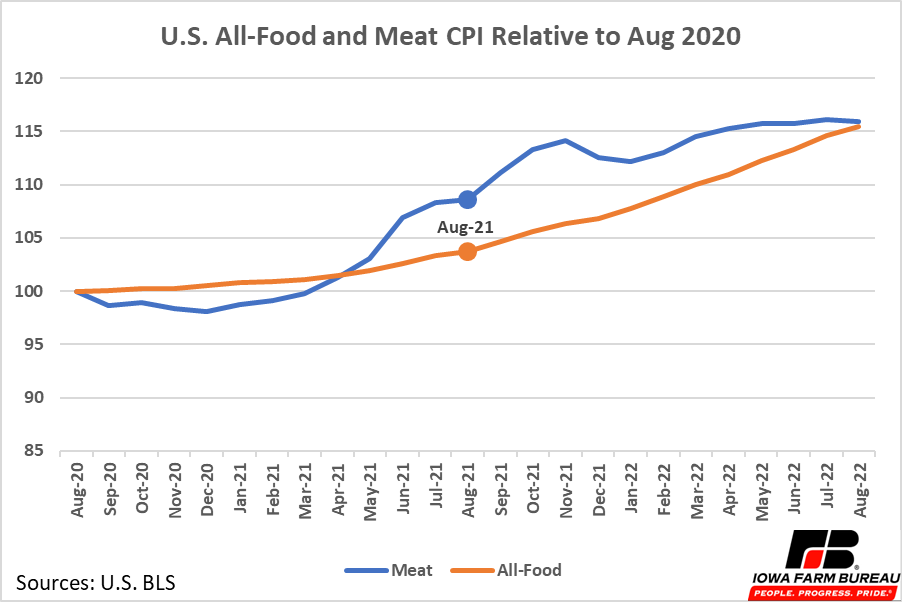 The recent interest rate hike is another attempt to slow inflation that remains present in the economy, in most areas, including food.  While interest rates are more likely to help control inflation on housing, services and consumer goods other than food and fuel, ultimately higher interest rates will dampen overall demand. More interest rates hikes are likely to occur in the coming months if inflation continues to run above the Fed’s target rate of 2%.