Direct from the farm

It’s a familiar story for many in farm country: A farmer identifies a problem and then finds a way to fix it with hard work and the expertise that comes from years of working the land and raising animals.

For brothers Nick and Adam Lenters, the problem was limited markets and poor margins for their beef cattle — especially when processing plants started shutting down due to COVID-19 in 2020. The solution: Sell the beef themselves by opening a new butcher shop, Old Station Craft Meats in Waukee.

“We’re just two brothers who really have a passion for this stuff and made it happen,” Adam said from his farm near Sioux Center.

Both men have a passion for smoking and preparing high-quality meat, especially beef, and sharing those products with friends and family. The Lenters family saw owning their own butcher shop as another outlet for the cattle they already had and a way to diversify their operation.

They chose Waukee for the shop because it is in the Des Moines metro, offering the widest possible customer base, and the western suburb community has been Nick’s home for almost 20 years.

“Adam and I make a great team,” Nick said. “He handles the farm side of things, and I manage the butcher shop.”

In addition to offering premium beef from their own herd, they also source partial beef carcasses from Upper Iowa Beef in Lime Springs and take care of the butchering in house.

From their own herd

The brothers own a herd of Lowline Angus beef cattle, a smaller breed that requires less land.

“With Lowline, we’re able to grow two head per acre, as opposed to one per acre for larger animals,” Adam noted. He explained that although the individual animal doesn't produce as much meat as Highline Angus, the total output per acre is higher.

For Nick, beyond the market access provided by the shop, he sees Old Station as an amazing opportunity to tell agriculture’s story.

“We try to be very transparent here,” he said. “You walk in the door, you can see our products, but then we’re breaking down animals just a few feet away behind the counter.”

Because of their close relationship with farmers, Old Station also knows a lot about the meat they sell, including where the meat is sourced from, the conditions the animals were raised in, as well as their diet and other production details.

The shop itself offers a wide variety of meats, both fresh and frozen. They also have grilling and smoking supplies, a variety of cured meats, sausages and other processed products, locally made cheese and snacks, along with beer and pop. 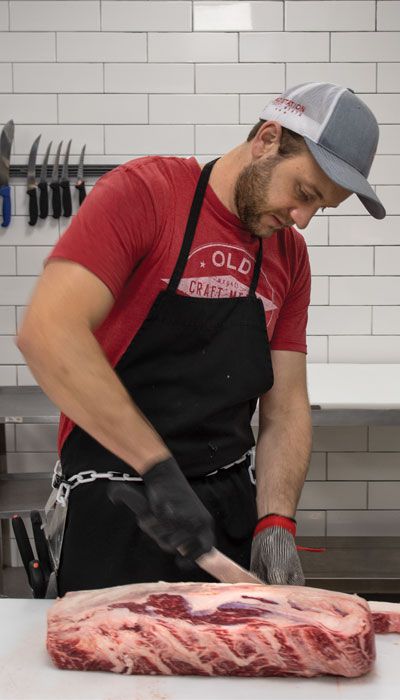 Nick brings groups into the shop for butchering demonstrations, something he said is gaining popularity.

“I think guys who are really into grilling like to see how their favorite cuts are made,” he said.

Another recent outreach op­­portunity came when a group of students from Waukee High School's Aspiring Professional Experience (APEX) program who are interested in a career in veterinary medicine asked for animal parts to practice suturing on. Nick sent a bunch of pigs' feet over to the school.

In addition to in-shop sales, Old Station was an early participant in ChopLocal.com, an online sales portal for livestock producers and butchers. Through the site, Nick can sell many of his meat cuts across the United States thanks to the animals being slaughtered at a federally inspected facility.

“Farmers do a good job caring for their animals,” Adam said. “But a lot of times, consumers don’t hear about all the good things we’re doing. At Old Station Craft Meats, we’re able to show off our work and help folks understand what we do and how we do it.”