Days of diesel supply dipped as low 25 days earlier in October but has since moved back up to around 27 days. Stocks remain on the low side and are near the low side of stocks in 2008, 2014, and 2019. Although recently stocks have remained at these low levels longer than they have in the past. 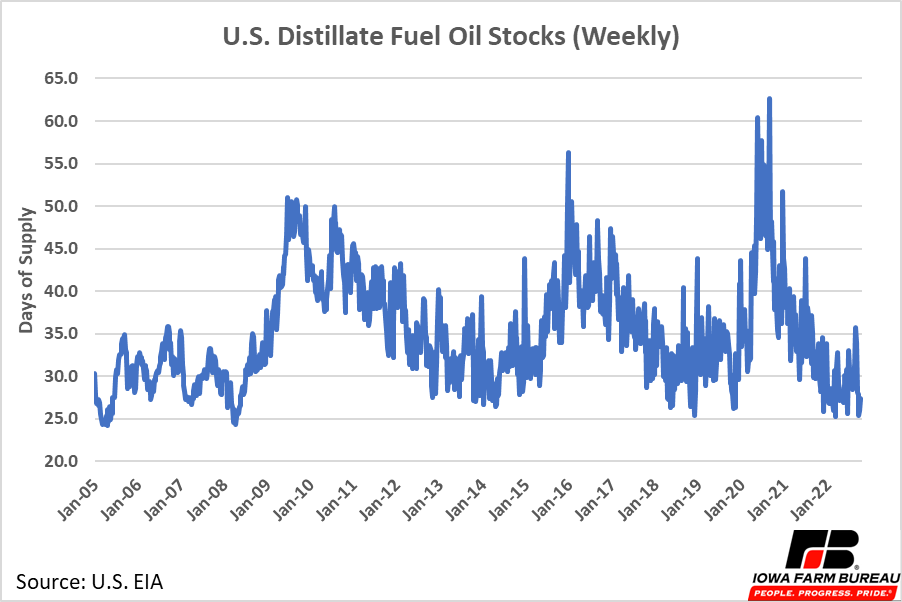 Regionally, there are areas dealing with tighter supplies than others. Figure 2 shows U.S. diesel stocks for the whole country and each individual PADD region reported by the EIA. Here stocks are simply reported in barrels, not days of supply. A map of the PADD regions is provided in Figure 3.

Regionally, PADD 1 has faced the tightest supply of diesel fuel with stocks below its 5-year range for the whole year. PADD 2, which includes Iowa, had stocks dip below its 5-year range in May. PADD 2, like most regions of the U.S., typically builds up inventory over the summer, and then sees inventory decline in the fall and winter. Diesel stocks in the Midwest did not build up as high as they typically do this summer, but also did not see as large of a fall decline. It is not yet clear whether PADD 2 inventories will continue to decline further below the 5-year range as we move into the winter, or if PADD 2 simply operates on available production this year.

While other PADD’s are on the low end of their inventories, they all sit within their 5-year ranges. The East Coast, and to a lesser extent the Midwest, are the two areas of the country that have been most effected by reduced U.S. diesel stocks. 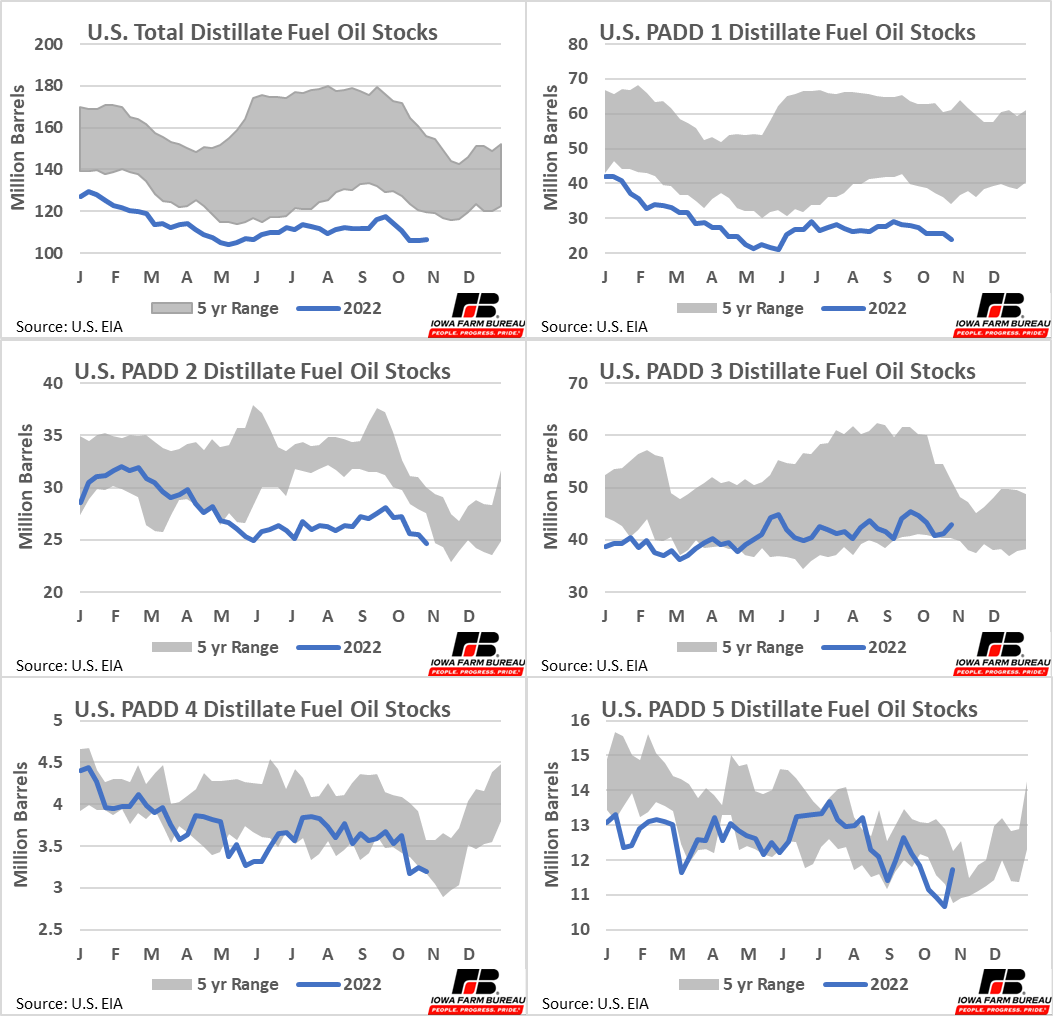 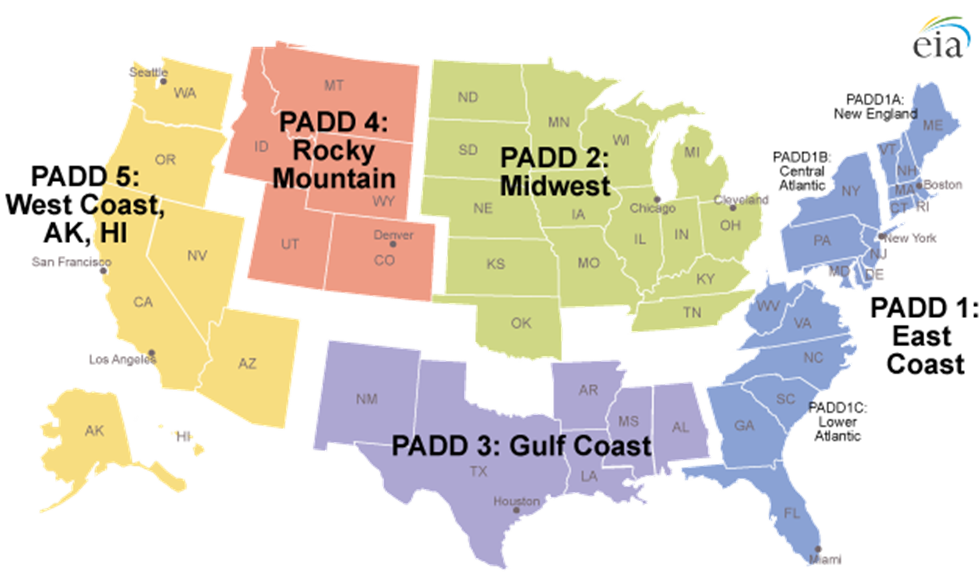 Why Stocks are Down 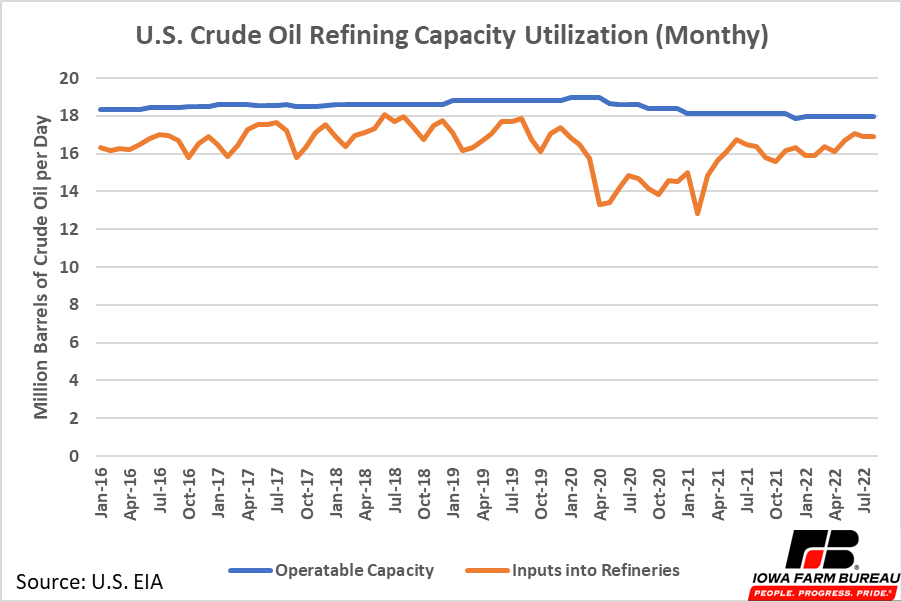 Reduced production would not be a big deal if consumption was also lower. However, demand for diesel returned to the market much faster than production. Consumption outpaced production in 2021 and 2022 reducing U.S. diesel stocks. 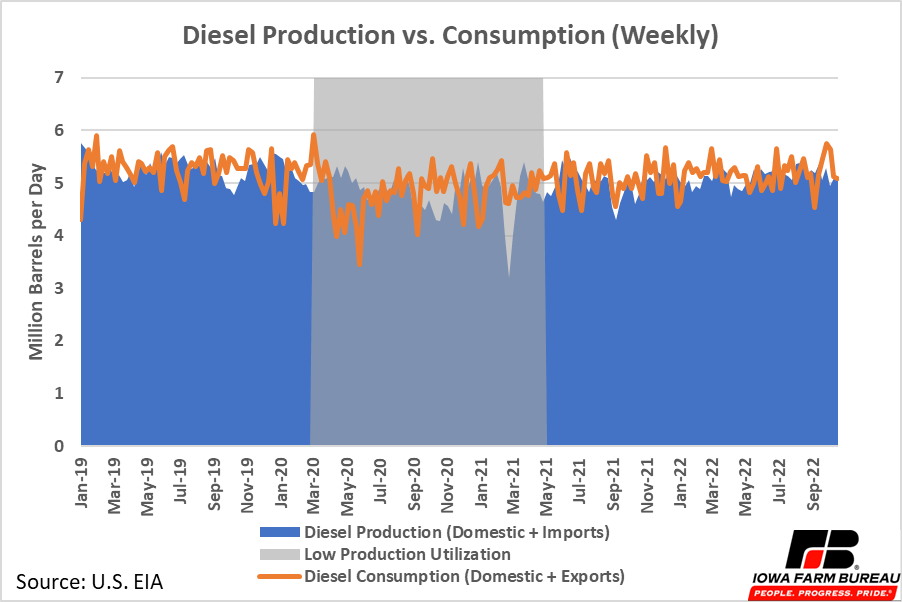 In addition to the reduced domestic production, the Russian invasion of Ukraine has not helped matters. Many countries banned Russia energy imports after the invasion and turned to other countries to meet their energy needs. The U.S. has been one of those counties. The U.S. is a net exporter of diesel fuel and exports of diesel have grown following the Russia invasion as demand from other countries of U.S. diesel grew (Figure 6). 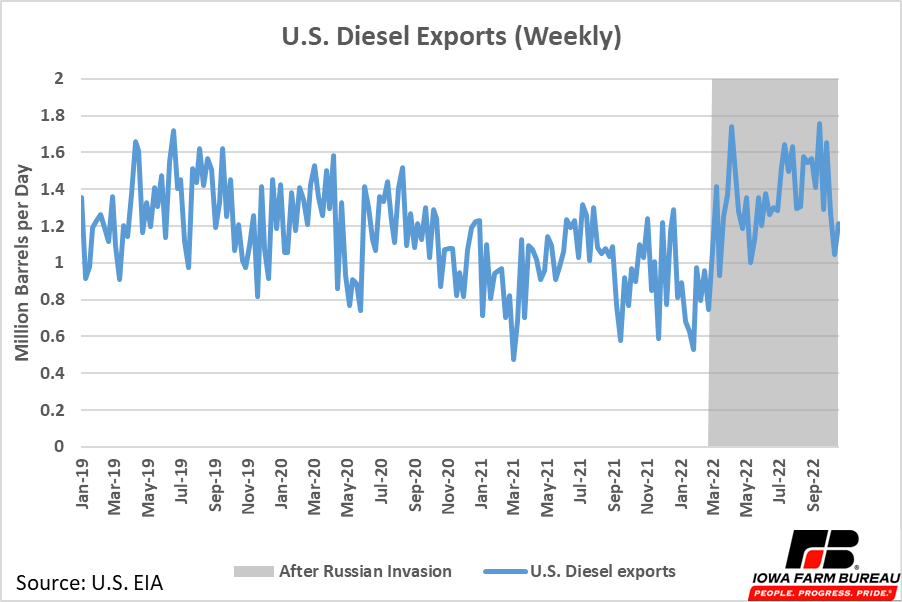 As mentioned in the introduction, diesel fuel prices have seen larger, more persistent price increases than gasoline. Figure 7 shows the weekly prices of both fuels since early 2019. Diesel prices have not come down as much as gasoline prices over the last 4 months, and the spread between the two fuels has increased significantly compared to the previous three years. 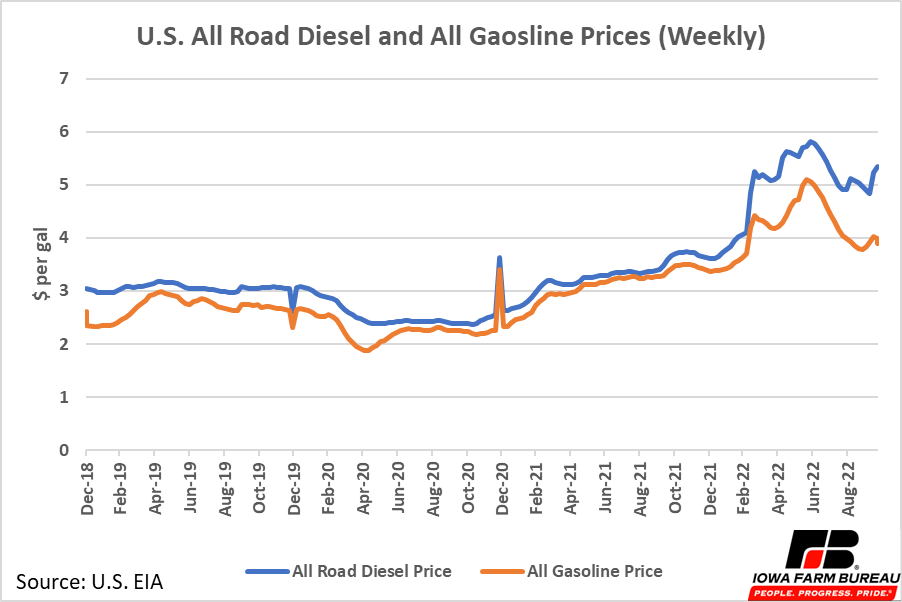 Figure 7. U.S. All Road Diesel and All Gasoline Prices (Weekly)

In the Midwest, it appears the tightening of diesel stocks in PADD 2 has led to relatively higher prices. Figure 8 shows weekly diesel prices in PADD 2 and the U.S. in 2022. To start the year prices in PADD 2 sat around $0.10 per gallon below the U.S. average. This gap held throughout the first six months of the year, at times getting as high as $0.20 per gallon. PADD 2 stocks began tightening in June and by the middle of June the gap between the PADD 2 price the U.S. price was gone. Occasionally, this fall the PADD 2 price exceeded the U.S. average. 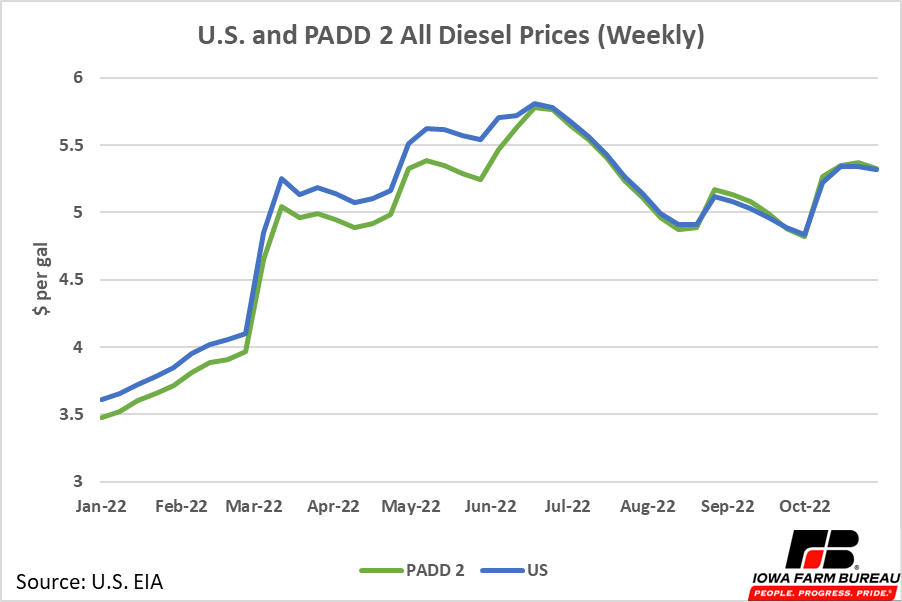 U.S. diesel stocks have been on the low end of the normal historical range since the beginning of 2022 and remain low now. However, some regions are feeling the effects more than others. The East Coast has the biggest diesel fuel shortage, followed by the Midwest, with all other PADDs within historical ranges in terms of current inventory.

U.S refinery capacity was limited in 2020 and the early part of 2021. This combined with a relatively quick return of demand for diesel fuel, reduced U.S. distillate fuel stocks.

In 2021, U.S. refinery capacity returned to a more normal utilization rates, but with less total available capacity.  Utilization rates have continued to climb recently, reaching over 94% from June 2022 to August 2022, the three most recently reported months.

U.S. diesel prices remain high and have not shown signs of coming down soon. Prices here in the Midwest have increased relative to other areas of the country in the second half 2022, due to reduced supplies.

With refineries operating near realistic capacity and stocks not yet showing signs of improvement, stocks are expected to remain low, with prices likely remaining high in the short term.