Did you see that? Don’t overlook Iowa’s water quality gains

Farmers use cover crops like rye and oats to prevent, on average, 28 – 31 percent of nitrates and 29 percent of phosphorus from reaching Iowa’s water.

To the typical person cruising by at 55 miles per hour, they’re nothing but weeds littering an otherwise bare field in early spring.

Buffer strips are equally unimpressive to look at, until you consider the impact these grassy strips in and around fields have on reducing erosion and preventing runoff from reaching streams.

And while a wetland is pretty – who doesn’t enjoy gazing at a pond and all of the wildlife it attracts – would you ever assume that a farmer strategically restored it to reduce nitrate loss by, on average, 52 percent?

Here’s what they all have in common: they’re powerful, natural solutions that blend into Iowa’s evolving landscape. Not only do you have to look carefully to recognize them – you often need someone to explain what it is you’re looking at.

And here’s another thing: they’re not nearly as new as you might think.

According to Iowa State University’s 2015 Iowa Farm and Rural Life Poll, Iowa farmers have invested as much as $2.2 billion in conservation over the past decade. So it shouldn’t come as a huge surprise that Iowa has led the nation in acres of grassy buffer strips for years; the number of acres increases nearly every month and is almost four times greater than it was in 2001! Nearly 414,000 acres in restored wetlands didn’t pop up overnight either. And even the relatively new kid on the block, cover crops, is growing rapidly over the course of nearly a decade (from less than 10,000 acres in 2009 to an estimated 623,700 acres in 2016). 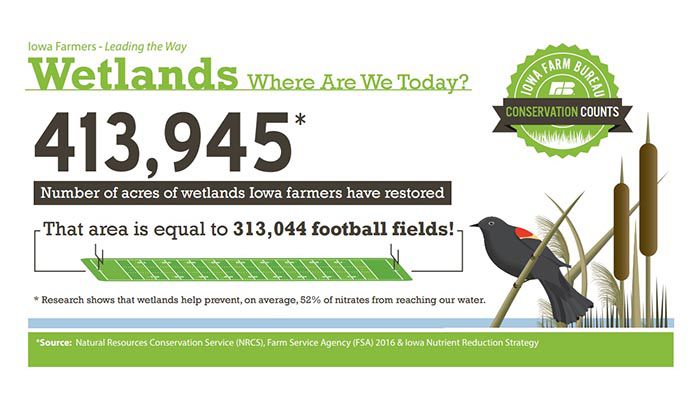 How did all of this happen, you wonder?

For many farm families, a commitment to conservation spans generations. On my family’s farm in Black Hawk County, my brother Ben can point to terraces that were built by our grandpa.

The current generation keeps the ball rolling by using tried and true practices (terraces, grassy buffers and more), new technology (like equipment that applies fertilizer precisely) and teamwork to get the job done.

When you look at it that way, maybe those “weedy” fields are pretty impressive.