It’s Thanksgiving week. That means the countdown to Thanksgiving dinner is down to single digits. To be perfectly honest, I’m counting down the hours until we’re treated to turkey and all the fixins.

And while I’m looking forward to spending time with my family in northeast Iowa this year, I got an early taste of Thanksgiving when I met a family in northwest Iowa who raised turkeys to be part of a special turkey pardoning tradition at the White House.

Chris and Nicole Domino and their five daughters were selected earlier this summer to raise the presidential flock because of their commitment to the turkeys in their care. The family is just the sixth from Iowa to raise turkeys for the presidential pardon, since the tradition began in 1947.

Raising a presidential flock meant the celebrity turkeys received VIP treatment at the Domino farm. A special barn was built on the farm to keep them separate from the other turkeys. The Domino family hand-fed the individual turkeys. They learned the best way to bathe the birds — the turkeys preferred a plastic tub with a garden hose and a nozzle as their shower head — and they let the turkeys listen to a local radio station. The noise, the family said, would help the turkeys get accustomed to other voices and sounds they might hear at the official pardoning ceremony.

But I found out that all of the turkeys on the Domino farm are well-cared for, not just those selected for the presidential pardoning ceremony. The family walks through each of their barns several times per day to ensure their birds have plenty of fresh feed and water. Like all Iowa turkey farmers, the family stepped up their biosecurity efforts after the outbreak of bird flu a few years ago. This barn was no different, they said.

They wear separate pairs of boots in each barn to make sure they aren’t tracking anything from outside of the barn to the inside, where the turkeys live. The Domino family carefully watches for any signs of sickness, and they work with their veterinarian if a turkey becomes ill.

Eventually, they picked the best 10 turkeys of the original group of 25, judging them on how well they walked, associated with people, and yes, even how well they did during a special podium practice which judged how well they presented themselves in front of people. And then it came down to two gobblers.

The family had the opportunity to be escorted in a van to Washington, D.C. this week and stayed in a fancy hotel suite close to the White House. They even had their own chef. 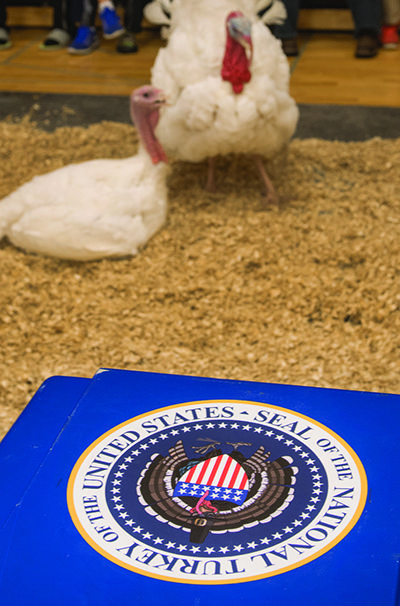 Prior to the pardoning, the Domino family took two of the turkeys from the presidential flock to four nearby schools, in carriers adorned with the Seal of the National Turkey of the United States. At the fourth stop, I watched as the family spread out a tarp on a gymnasium floor, scattered wood shavings the turkeys were accustomed to from the farm, and then carefully released the turkeys onto the tarp. I watched as middle school students filed into the gym, pointing at the turkeys and wondering how they were so calm. Since this was the fourth school of the tour, the turkeys were worn out. However, one turkey continued to strut around the tarp while the other tried hard to stay awake for the visit.

The visit gave middle school students — and staff — an opportunity to learn more about how committed the family is to caring for each of their turkeys. The family talked about how they can identify when a turkey is sick and not feeling well; they know their turkeys well enough to know when they need to seek the help of a veterinarian.

It was a reminder to me of the great level of care that farmers take year-round in raising their livestock; you could see the pride in their faces and hear it in their voices as they described life with their turkeys.

The family had to keep a tight seal on the fact that they were raising the presidential flock. It’s not because they weren’t excited about it, but because they wanted to keep the turkeys safe from disease.

The family admitted that while it was an honor to raise the presidential flock, it wasn’t much different than the care they show the rest of the turkeys on their farm — sans the hand-feeding, individual baths, and special carriers with the Presidential Turkey seal, of course.

By Bethany Baratta. Bethany is the ag commodities writer for the Iowa Farm Bureau Federation.