Christmas trees are the answer to Ryan Pfantz’s dream.

“I’ve always been interested in niche agriculture, beyond the traditional corn and soybeans. I grew up on the farm, and I’m a child of the 1980s farm crisis where I saw a lot of farmers look for added revenue streams,” says Pfantz.

So after college, a city job, and finding the love of his life, he headed home to State Center and the family farm — and the dream became reality.

He and his wife, Tara, with help from his father, Craig, began planting trees in 2006.

Growing Christmas trees comes naturally to Pfantz. He worked for a local tree farm in high school. “There were certain management aspects I had to learn, but I was familiar with the physical side of it,” says Pfantz.

When the tree farm where he had worked went on the market, it spurred him toward the tree business. But the price was too high, and the land eventually sold to a housing developer.

“That’s when I started planting trees,” he says. 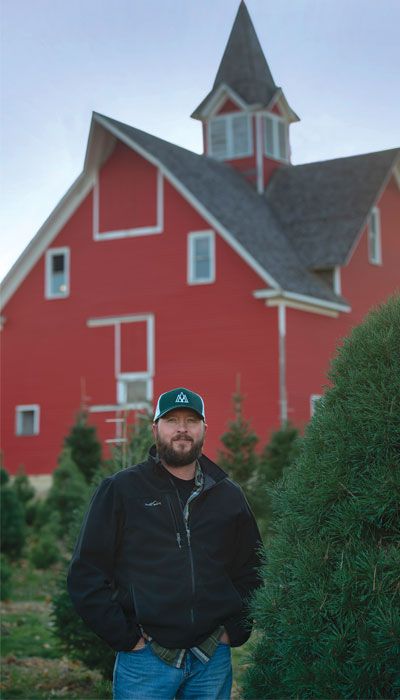 Pfantz sees plenty of opportunity in the future of the tree business. “The demographics for tree growers is worse than that of ag in general,” Pfantz explains. “There are not many young people.”

But he's seen demand grow rapidly in the past five years as people seek ways to reconnect with nature and "live green" while harboring sentimental longings for life on the farm.

“A lot of urban people are only a generation or two away from the farm. They yearn to relive that experience, to get back to their roots," he says.

Victorian Pines offers the whole experience. Customers can come out ahead of time to select and tag the tree of their choice, then come back to cut and pick it up. Pfantz says he is there to provide “as much assistance as they want” in the process, allowing customers the experience of their choice.

Growing Christmas trees is a long-term venture, with trees taking at least seven to eight  years to reach harvest maturity. That can make it difficult to judge and meet demand.

“Unfortunately, the trees we’re selling now are from 2010-2012, and those weren’t good growing years. So meeting this peak demand is trying,” says Pfantz, who adds his greatest growing challenge is drought.

Maintenance is also a challenge in tree farming.

“I used to mow this place like a park,” he adds. “Then I figured out if I left the vegetation long near the trees, but not too long as to hamper seedling growth, I could keep the soil temp cooler.”

Nearly 6,000 trees on 6 acres takes a lot of mowing. “One of the most worthless tasks ever invented for man,” says Pfantz.

So he developed a different plan.

A flock of purebred Shropshire sheep are now the official groundskeepers. His 25 ewes graze from July until the edible vegetation is gone.

Pfantz finds the trees make a good seasonal revenue stream, and he enjoys a venture that doesn’t involve an 8-to-5 daily schedule. He’ll gladly accept the challenges that come with it.

“The demand is growing for Iowa-grown Christmas trees, and we’re doing everything we can at Victorian Pines to meet that demand,” says Pfantz.

Queck-Matzie is a freelance writer in Greenfield.