Ann Bishop McGregor of Charles City and Gracie Lawson of Moulton were named winners of the fifth annual “Celebration of Iowa: Agriculture Art Award” August 18 at the Iowa State Fair.

“These Iowa artists have captured the natural beauty of our state and the farmers who care for the land and animals that make our agriculture so productive,” Iowa Secretary of Agriculture Bill Northey said. “This exhibit helps brings Iowa art and agriculture to a wider audience. I would like to congratulate this year’s winners and participants for their extraordinary work.”

In the Adult Division (ages 18 and over), McGregor won $1,500 in receiving the top honor for her pastel on paper, Evening Bales (pictured below). Thomas Agran of Iowa City and Amy Uthus of Knoxville took second and third place, receiving $1,000 and $750, respectively. 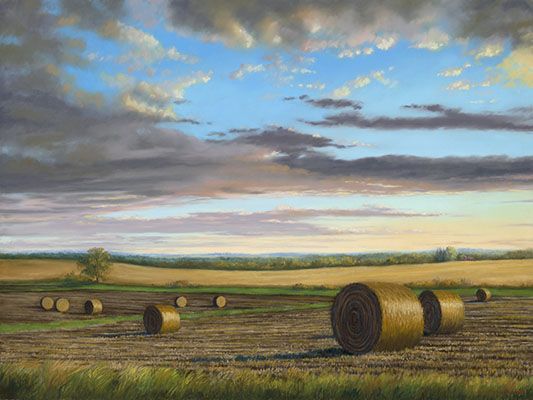 In the Youth Division (ages 17 and under), Lawson won for the second year in a row, receiving a $1,000 first-place prize for her mixed media work, People of the Earth (pictured below). Hannah Schmitt of Waucoma and Isabella Martinez-Conrad of Des Moines won second and third place, receiving $500 and $250, respectively.

“Iowa has a strong history of artists who have honored the beauty and diversity of our land through their works, even before we were a state,” DCA Director Mary Cownie said. “That history continues with this year’s exhibit, and we thank the Iowa Department of Agriculture and the Iowa Farm Bureau Federation for partnering with us to showcase Iowa artists of all ages and supporting their talent.”

“Iowa agriculture is diverse, but passion for the land and working with our hands to grow things and care for animals is what unites us,” IFBF President Craig Hill said. “While farming accounts for one out of every five jobs in our state, as producers, it’s a calling to the land and nature that truly makes us feel at home.”

The entries were judged on innovation of concept and execution of contest theme and the aesthetic and technical quality of the work. Eligible participants had to be Iowa residents working in 2D media. The winning entries were judged by officials from the Iowa Department of Agriculture and Land Stewardship, Iowa Department of Cultural Affairs and Iowa Farm Bureau Federation.

The finalists’ original artwork will be on display until Oct. 24, 2016, at Café Barattas in the State Historical Museum of Iowa, 600 E. Locust Street in Des Moines.

The list of winners and finalists in the Adult and Youth divisions follows: