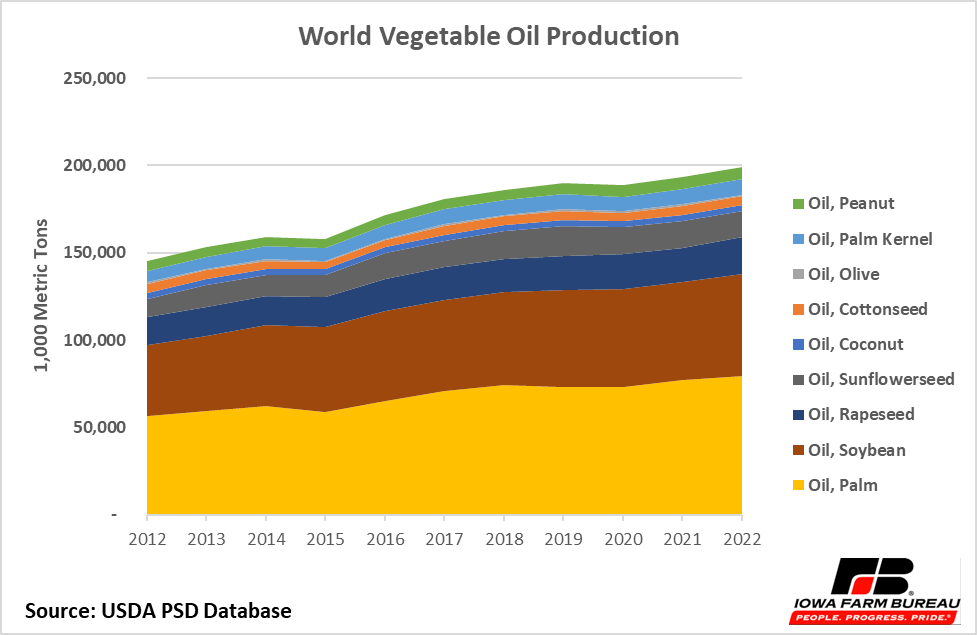 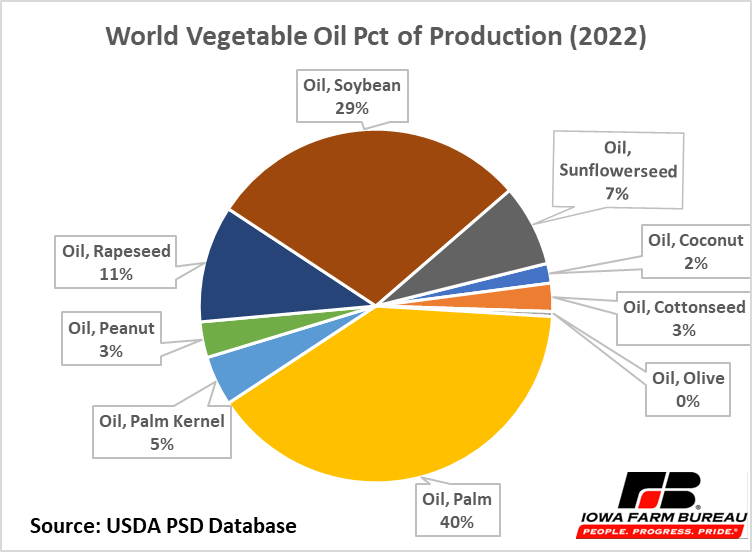 In 2022, palm oil is expected to account for 40% of world vegetable oil production, soybean oil 29%, rapeseed (canola) oil 11%, sunflowerseed oil 7% and the other vegetable oils accounting for 13% of production collectively (Figure 2).

The various vegetable oils tend to be used for cooking and industrial uses.  Peanut oil is used almost exclusively for cooking (99%) whereas only 19% of palm kernel oil is used for cooking. In 2022 it is anticipated that 72% of all vegetable oils produced will be used for domestic food consumption. By type of oil, it is anticipated that 99% of peanut oil, 92% of rapeseed/canola oil, 89% of cottonseed oil, 82% of sunflowerseed oil, 80% of soybean oil, 62% of palm oil, 45% of coconut oil, and 19% of palm kernel oil will be used for domestic food consumption (Figure 3).  These oils are used directly for frying and cooking and are also used as ingredients in food products. 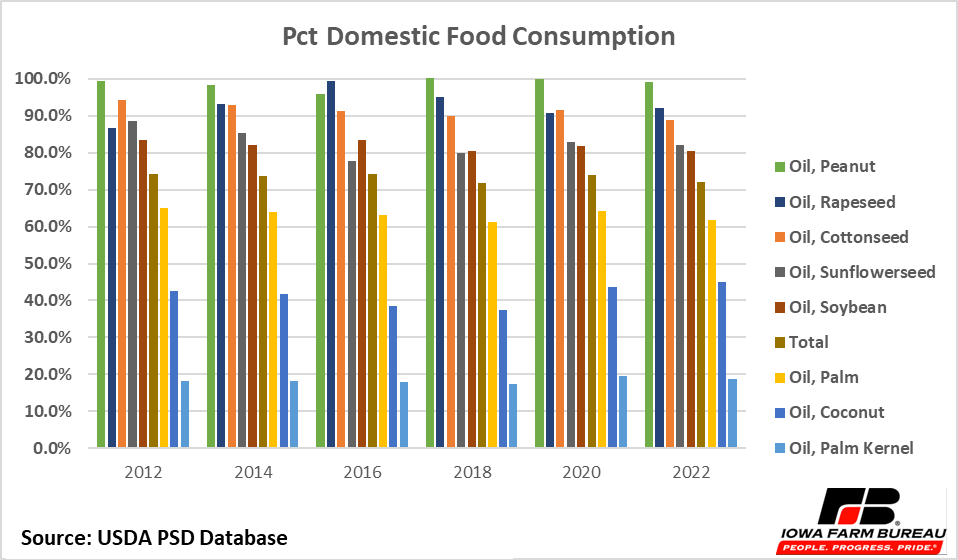 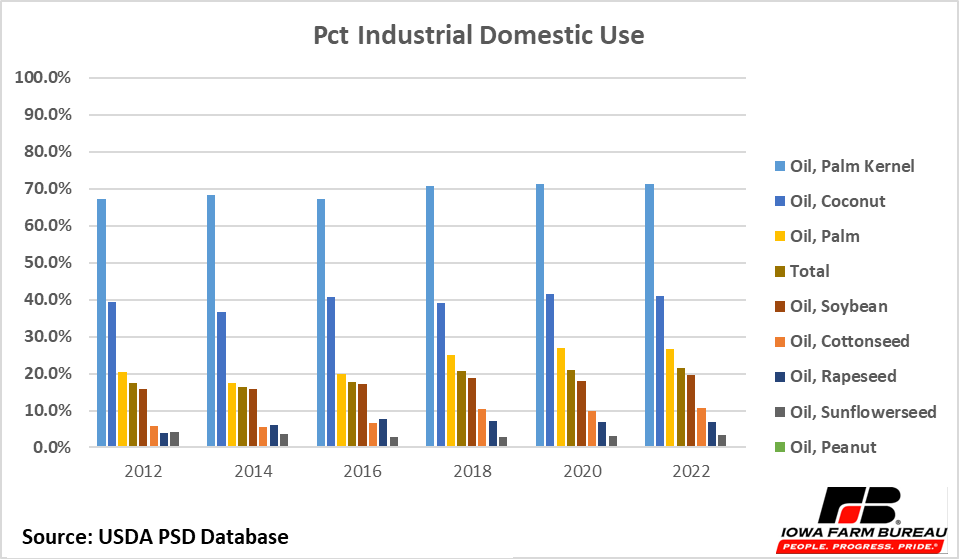 For soybean oil, industrial use has increased from 15.8% of production in 2012 to 19.5% of production in 2022. Much of that increase in use is for biodiesel. There are now 11 biodiesel plants in Iowa with a stated combined capacity of 470 million gallons per year (Figure 5). Nationally, there are 66 biodiesel plants with a total capacity of 2,634 million gallons per year. 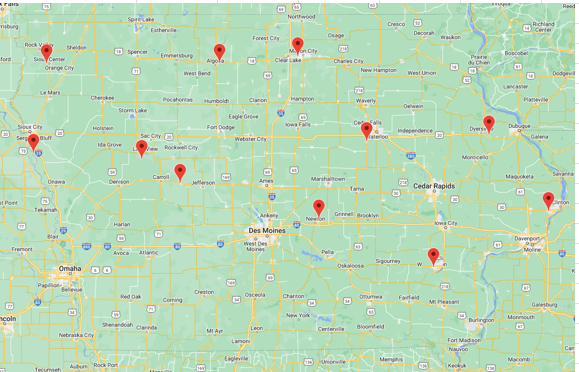 One forward forecast of renewable diesel production looking forward to 2030 suggests that current capacity may need to nearly triple by 2030 (Figure 6). In 2022, it is estimated that the U.S. is using about 8.1 million tons of vegetable oils for biodiesel, which is about 23% of global industrial use.  Reaching the 2030 projection would increase U.S. vegetable oil feedstock use for biodiesel to nearly 21 million tons just for renewable diesel fuels. To put that in perspective, that would be equivalent to the soybean oil from 4.18 billion bushels of soybeans. 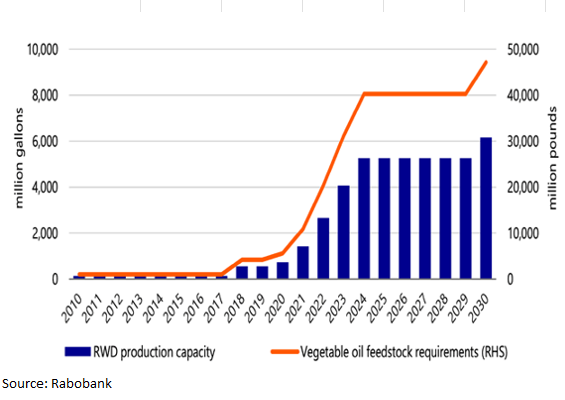 Increasing the demand for vegetable oils will require new crush capacity. Plans have been announced for expansion of soybean crush capacity at 4 existing plants and for 9 new plants. If all that capacity comes on-line, it would total 430 million bushels of additional crush capacity (2022 soybean crush is currently estimated to be 2,255 million bushels) which would produce an additional 2.15 million metric tons of soybean oil, which would get us to about half of the projected vegetable oil needed to meet the goal in 2030 of 6 billion gallons of renewable diesel.

Re-engineering our energy and fuel sources poses many challenges and one of them will be balancing the production of vegetable oil feedstocks for renewable diesel which will require a re-balancing of crop mixes, an expansion of crush capacity, and developing significant, new and/or expanded markets for the soybean meal and other protein products that result from crushing oilseeds. 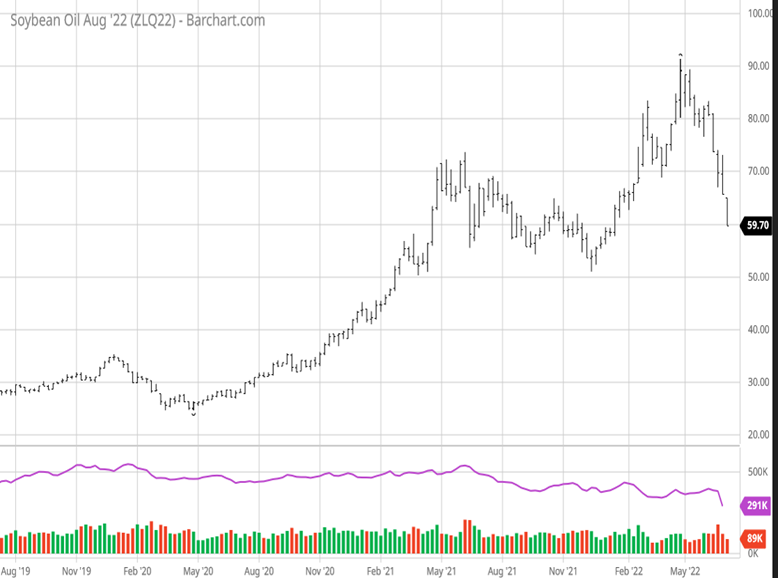 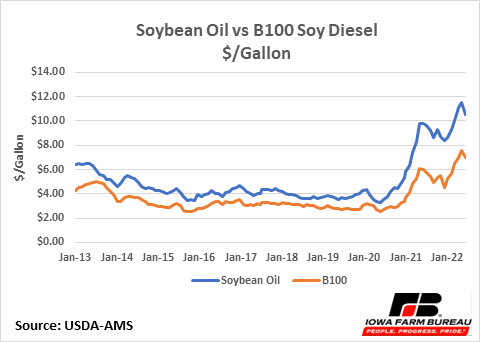 Soybean oil is a primary feedstock for B100 soy-based biodiesel. The rise in soybean oil prices has coincided with the rise in biodiesel prices. In fact, as crude oil, gasoline and diesel fuel prices have increased, and shipments of competing food-use vegetable oils have been disrupted from Ukraine and Russia, the price of soybean oil has increased even faster than B100 (Figure 8). 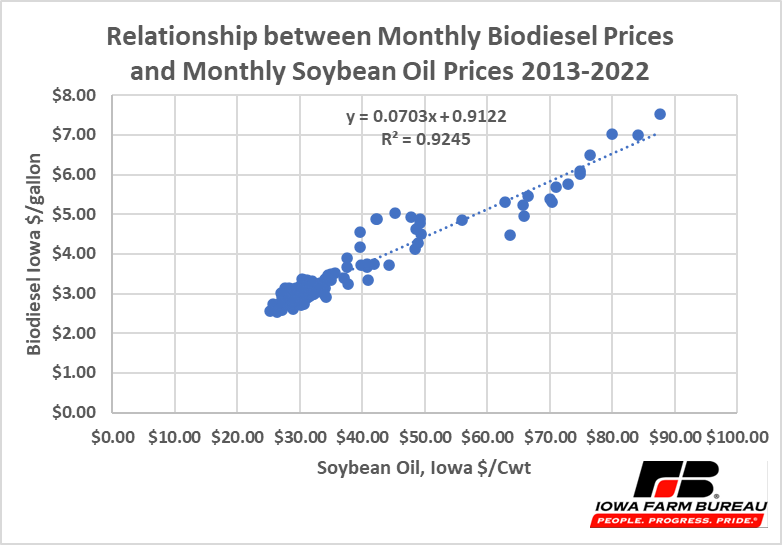 With crude oil and soybean oil prices declining in the past few days, it is likely that diesel and biodiesel prices will also decline in the near-term.