Take it from an Iowa farm girl: here are 10 good reasons to keep eating meat 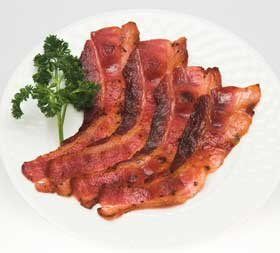 Just when I’d dealt with the whole ‘sitting is the new smoking’ study, by upping my exercise regimen,  it now appears another aspect of my daily life is casting health dispersions; red meat.  But this one , I don’t plan to give up.  Let me explain.

First, what I’m talking about is a new report by the World Health Organization’s (WHO) International Agency for Research on Cancer, which puts processed meats in the same carcinogenic category as cigarettes, diesel-engine exhaust and asbestos. Specifically, the WHO hypothesis isn’t based on new studies, but a compilation of observational studies, which concluded that eating more than a pound a week of red and processed meat increases the risk of colorectal or stomach cancers.

Despite this study, the US Department of Agriculture hasn’t changed its recommendation for keeping lean meats in the diet ( http://www.choosemyplate.gov/protein-foods-tips ).

So, with all that in mind, I submit my Top 10 List of Reasons Why I Still Eat Bacon:

10)   I grew up on a livestock farm.  My Grandma not only served meat three times a day, seven days a week and happily cooked pies with lard, she lived to the feisty age of 99.  We loved her, her BLT’s and her pies!

9) The World’s Oldest Woman, 116-year-old Susannah Mushatt Jones, has a sign on her kitchen that reads, “Bacon Makes Everything Better’ and eats two strips every day. She must know something.

8) I know hundreds of Iowa livestock farmers, hearty and strong, who eat meat every day, usually from animals they grow on their own farms.  They definitely know something!

7) Fake meat is, well, fake. Why do vegetarians go to such extremes to create fake foods that taste like meat?  Why do they need to, and who enjoys such things, especially after reading those tofu dogs not only have meat, but (ahem) human DNA? http://www.cnn.com/2015/10/26/health/vegetarian-hot-dogs-contain-meat-clear-foods-feat/index.html

6) As my favorite doctor, (my husband) always chirps; “ Commonality doesn’t equal causality. ”  So, if eating two slices of bacon a day raises the risk of getting cancer by 18-percent (according to the new WHO report), it doesn’t guarantee you’ll get it.  You can apply ‘lottery logic’ here; buying a ticket every day doesn’t mean you’ll win the lottery.  Besides, scientists agree when it comes to your cancer risk, the “genetic lottery” is a more predictable, if not a guaranteed indicator of risk: http://scienceblog.cancerresearchuk.org/2013/05/14/angelina-jolie-inherited-breast-cancer-and-the-brca1-gene/

5) Humans are mortal.  Unless you’re Susannah Mushatt Jones, life is short.  Do you want to live to 100 if all you could eat is fake cheese that won’t melt, Tofurky, flax, miso paste and beans?  Well, that’s your choice.  (I’ll be sitting upwind from you, thanks).

4) Sun exposure, genetics, obesity, radon, hair dyes, cell phones, lead, antiperspirants, eye shadow, Teflon and exposure to talcum powder and fluoridated water are also accused of increasing our risk to cancer.  Maybe the question should be; what doesn’t? Or, even better, who wants to deal every day with the stick-thin, smelly, off-the-grid, flax-eating, toothless, chaffed and desperate-for-a-make-over Nervous Nelly who lives her life to avoid all risks ?

1). Red meat is the tie that binds us all at so many family and social gatherings; it’s the hushed reverence we feel as Moms bring out the Thanksgiving turkey; it’s the steaks Dads brag about grilling to perfection on for the Fourth of July; it’s kids, enjoying a brat at the World Series; it’s football fans noshing on hamburger-hearty chili at Superbowl tailgates. In short; it’s just plain, unapologetically American, http://theweek.com/speedreads/585541/stephen-colbert-finds-unlikely-loophole-whos-red-meatcancer-warning and I, like many, proudly raise a fork and salute the men and women, the farmers, who help make it all happen!

By Laurie Johns. Laurie is the public relations manager for the Iowa Farm Bureau Federation.