Soybean Storage, Will it Pay This Year?

As the soybean harvest season moves closer it becomes time to decide whether to sell soybeans this fall, or store soybeans for sale later in year, either through private or commercial storage.  Over the past two marketing years we have seen large increases in the price of soybeans throughout the year, leading to opportunities to profit from storing soybeans.  But profiting from storage does is not always possible.

The average benefits from storing soybeans in 2019/20, 2020/21, and 2021/22 are also shown in Table 1 assuming a storage rate of $0.08 per bushel per month for soybeans. These calculations use average cash prices received by farmers across Iowa.  Prices could vary to some degree across Iowa making storage slightly more or less profitable in some regions.  The large increases in soybean prices throughout the past two years allowed for opportunities to profit from storing soybeans in both 2020/21 and 2022/23.  However, as is evident from looking at 2019/20, gains are not always possible from storing soybeans.  Decreases in prices, or prices that increase slower than the cost of storage led to losses from storing soybeans.  The final two columns in Table 1 show average estimated fall soybean price and breakeven cash prices required to cover the cost of storage. 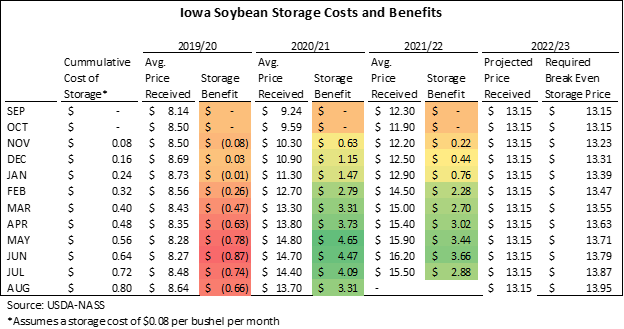 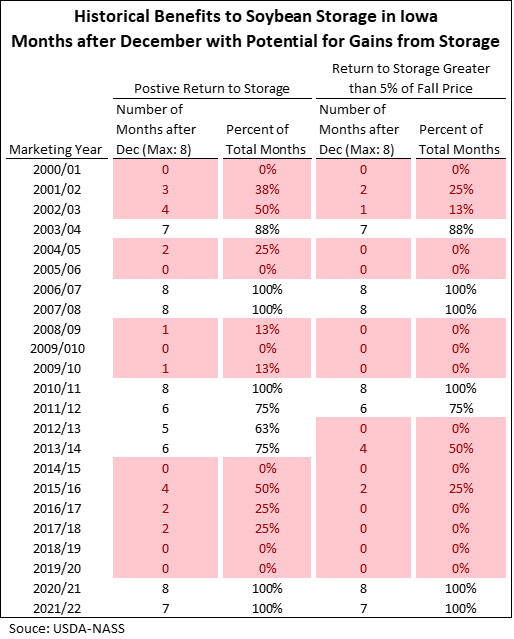 Supply and demand fundamentals determine the price received by producers, and as a result effect the profitability of storing soybeans.  Figure 1 shows the total production, total use, exports (part of total use, and ending stocks for ach marketing year.  Years with positive returns to storage in over half of possible months are shaded in gray.  Years with tight ending stocks relative to prior years tend to be years to store soybeans. 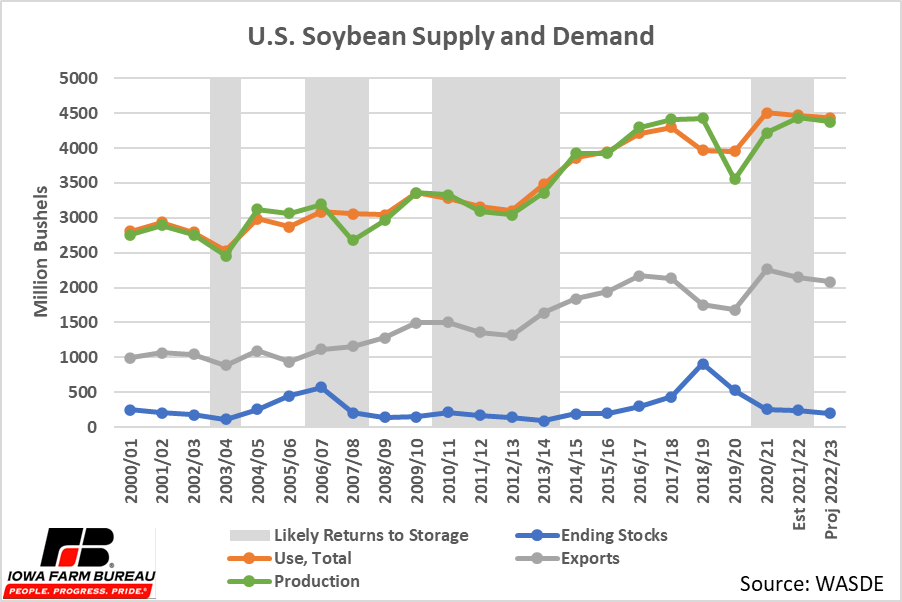 The current outlook for soybean prices is mixed.  One hand, current projections for demand are not as strong as last year. Some level of demand destruction is underway due to the higher prices of the past 18 months or so. The September 2022 WASDE report forecasts both exports and total use to be slightly lower next year.  The rising value of the dollar against other major currencies has made U.S. soybean exports less attractive to foreign buyers. The dollar will likely continue to rise if the Fed continues to raise interest rates making U.S. soybeans even less attractive to foreign buyers.

On the other hand, other central banks have also begun to raise their interest rates on their currencies.  If this continues this could slow the rise in the value of the dollar and might even lead to downward pressure on the dollar and potentially make U.S. exports more competitive.

Another wildcard is supply. Because of lower production forecasts in the September 2022 WASDE report  the forecasted soybean ending stocks were lowered to 200 million bushels. This is lower than the last two years, and if realized would be the lowest since the 2015/16 marketing year. Tight ending stocks led to premiums to store soybeans during the last two years. If the October and subsequent reports see lower production estimates (and this is quite possible since the current yield estimates imply record high pod weights), then ending stocks could be lowered further unless there is even more demand destruction. Often, once supply is known, prices respond to that knowledge and then if demand declines higher ending stocks estimates could emerge as the year progresses.