This article touches on the relative value of cuts of beef.  The primal cuts discussed are outlined in Figure 1. A detailed overview of specific retail cuts from these primal cuts can be found on a link at the National Cattlemen’s Association website. 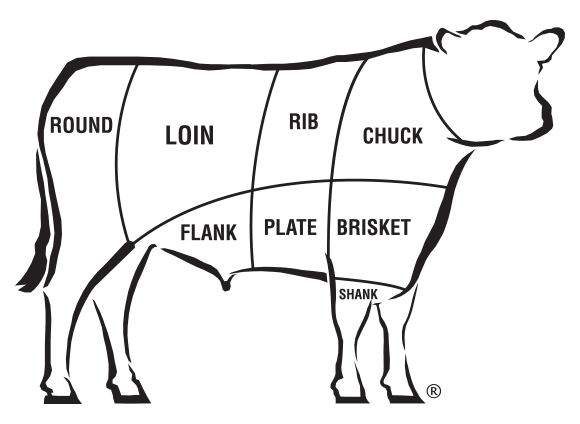 The price of each primal cut is given in Figure 2. Prices of all primal cuts have increased over time. The rib and loin have historically been the most valuable cuts on a per pound basis.  High value retail cuts including ribeye steaks and T-bone steaks come from these areas making them more. valuable. Since around 2010, the spread between the ribeye and loin per-pound prices have increased, making the rib primal the most valued primal cut on a per-pound basis. 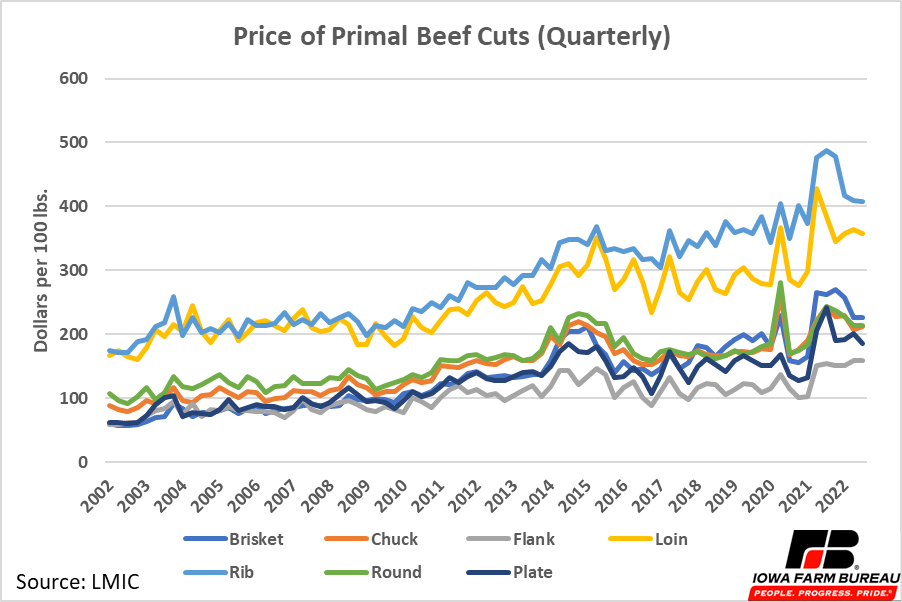 The percent of each primal cut of the total cutout weight is shown in Table 1.  This weight along with the relative price of each cut is used to calculate the relative value of each cut presented in the third column of the table.

While the rib is the most expensive primal cut on a per pound basis, it does not produce as many pounds of product as other cuts like the chuck, round, and loin.  The primal cut that creates the most overall value from the carcass is typically the loin, followed by the chuck.  Both are large cuts relative to the total cutout of the animal.  However, the loin has more high valued cuts than the chuck. 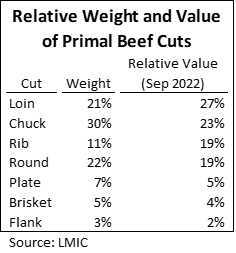 Historical relative values of each cut are shown in Figure 3. A few notable trends are evident in Figure 3.

The first is the strongly cyclical nature of the price of beef loins within each year. The loin’s value typically peaks in the late spring and early summer months and is at its lowest value in the fall. Summer cookouts have an effect of the value of beef loins. Chucks, rounds and ribs have some variation within each year, but are not nearly as cyclical as is the price of loins. The lower-valued primal cuts (plate, brisket, and flank) carry a relatively stable value throughout the year.

Third, the rib has been becoming relatively more valuable, especially in the last five years. The price of rib has increased faster than other cuts. The relative value of the rib has frequently surpassed the round in recent years, even though the round has about twice the retail pounds as the rib.  In the early 2000’s there were a few periods of time when the rib created more value than the round, but this has not occurred very often since that time.  The large increases in rib prices mentioned earlier have led to the change in this relationship.

Finally, the relative value of primal cuts appears to change during times of higher beef prices. In 2008, 2011-15, and 2020 the chuck briefly surpassed the loin to become the most valuable part of the animal.  The round also became relatively more valuable during these periods while the ribs relative value decreased. During all these periods, the retail beef price rose. In 2008, higher feed prices pushed cattle prices and retail beef prices higher. From 2011-15, cattle inventories were falling to record lows while higher commodity prices increased feed costs. Reduced cattle numbers and increased costs increased the price of cattle at various times during this period, pushing retail beef prices higher. And in 2020, the beginning of the COVID pandemic brought supply chain issues to packers, wholesalers, restaurants and institutional meal providers changing the marketing channels for beef, temporarily reducing the overall supplies of beef for consumers, concentrating the demand for beef at retail, and driving retail beef prices higher.

It appears during the early times of reduced supply it is the lesser-valued cuts that gain the most value. If all beef prices rise, consumers switch to lower beef cuts in the short term, making the price difference between high-value cuts and lower-value cuts smaller. However, as time allows for consumers to adjust, price relationships tend to adjust back toward “normal”.  It also can be partially attributed to a rise in demand for lean and very lean ground beef that generally comes from the lower-valued cuts and relatively less demand for steak. 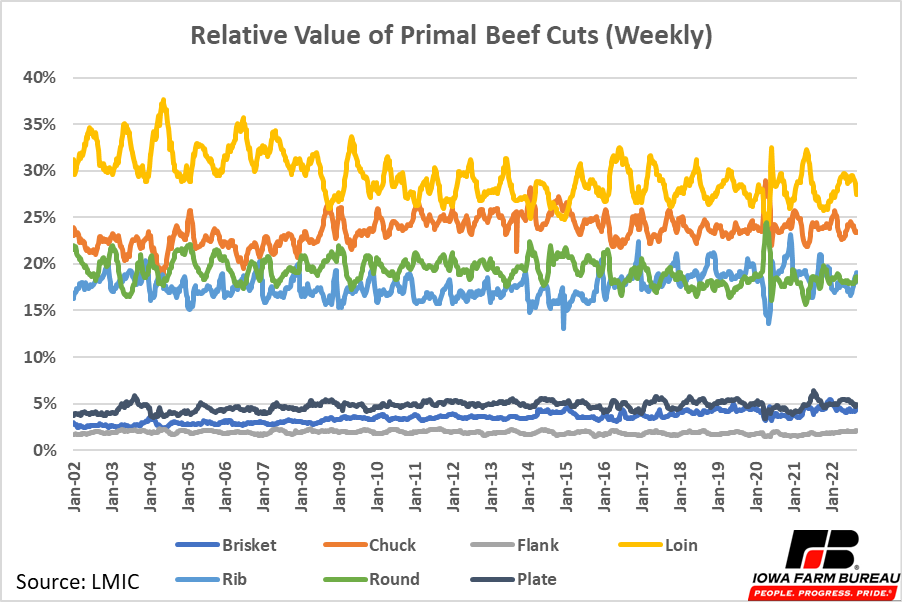 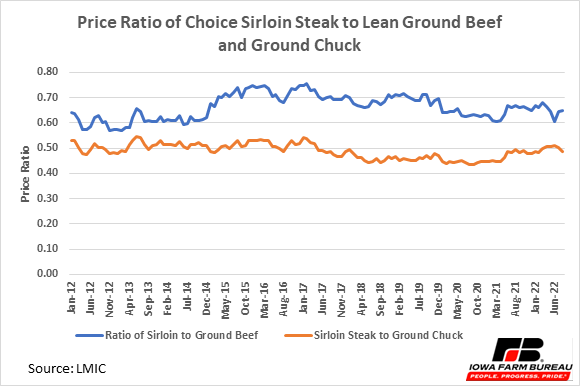 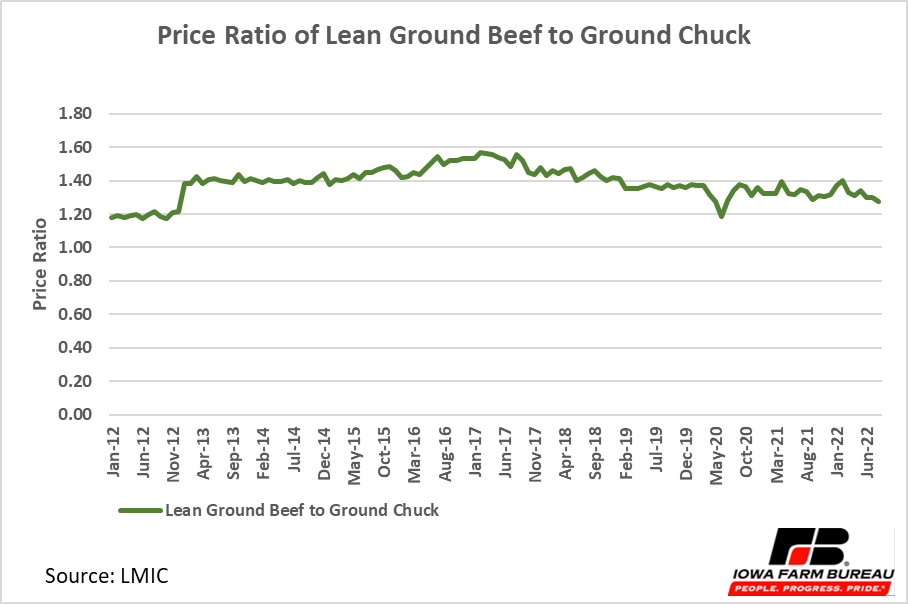