Our farm, her legacy

One of my earliest memories of my grandma is listening to her sing at our local church. I could sit in the choir loft with her only if I remained quiet. Singing was one of her favorite things to do; she sang at my cousins’ weddings and local retirement homes. Incidentally, singing is what got her involved in Farm Bureau. Her story, including how she became involved with Farm Bureau, is pretty remarkable.

Virginia Haupert and Myron Striegel were married in 1943. She was 21 at the time, just a year older than I am now. My grandma had seven children, all boys, the youngest being my father born in 1957. That seems like a large family now, but it was typical back in those days. They moved to the family farm near What Cheer in 1950. She worked alongside my grandpa on the farm, determined to be the best farm wife. She was full of determination and a work ethic reminiscent of days past — she was a daughter raised during the Great Depression and that was evident throughout her life. Her strength and determination would help her in ways she couldn’t have imagined.

In 1959, my grandpa was killed in a car accident and Grandma was hospitalized. When she got out of the hospital, she was left with the task of raising the children and running the farm by herself.

Looking back, I wonder how she did it all. After my grandpa died, she could have chosen to lead a new life. However, in her mind and her oldest sons’ minds, selling the farm was never an option. She wanted to raise her children on the farm that they had worked so hard to build. My grandma was determined to make the best out of the cards life had handed her.

A breakthrough: involvement in Farm Bureau

My grandma joined the Keokuk County Women’s Farm Bureau Chorus in 1962. Prior to joining, she had no experience with Farm Bureau and really didn’t have the time to leave the farm. With the Keokuk County Farm Bureau Chorus, she won Best Chorus eight years in a row at the annual meeting. Besides the chorus, she sang and played “instruments” in the Farm Bureau Kitchen Band. My grandma and other women in the community, armed only with kitchen utensils and their voices, would go around singing about farm life. Even now, when I go to visit her at the nursing home, the picture of her with the Kitchen Band is proudly on display.

In addition to the chorus, my grandma began to attend the women’s board meetings and was elected to represent the women on the men’s board. The women’s representative didn’t really have a task at the meetings, but my grandma, like the rest of my family, will speak if she has something on her mind. With her experience running the farm, she could talk hogs and marketing as well as any man. By the time her term ended as the women’s representative, she was elected as treasurer of the men’s board, followed by vice chairman and then served as Keokuk County Farm Bureau President.

Conservation and an enduring legacy

In 1977, at a Farm Bureau meeting, my grandma was approached about serving on the State Conservation Board. Governor Ray was looking for a woman to serve on the board, and my grandma accepted the offer. She served for 12 years. After her final term was up, she served as the Assistant Soil Commissioner for Keokuk County, always concerned about preserving our soil.

On her own farm, she saw the importance of conservation. When my grandpa was alive, they had started terracing their land. By 1999, my grandmother had terraced 180 acres. Even in my youth, I remember she was an active partner in decisions on her land that my dad farmed. She would lend advice (sometimes not asked for) and would go on weekly drives to check the crops.

My grandma was once quoted saying: “My farm, other than my God, is my life.” My grandma’s farm is still operational today — with my dad farming the land and my uncle and cousin keeping their cattle herd in the barn at various times during the year. We’re certainly still an agriculture-based family, with four of my uncles owning and operating farms on the same county highway as my grandma once did. Many of their own children have gone into agriculture related fields.

To make it as a farmer, you need to be Farm Strong, filled with determination and a conviction that will lead you through life’s trials.

To leave an enduring legacy, you need the strength, wisdom and foresight to foster those attributes in others.

My grandma taught me that. 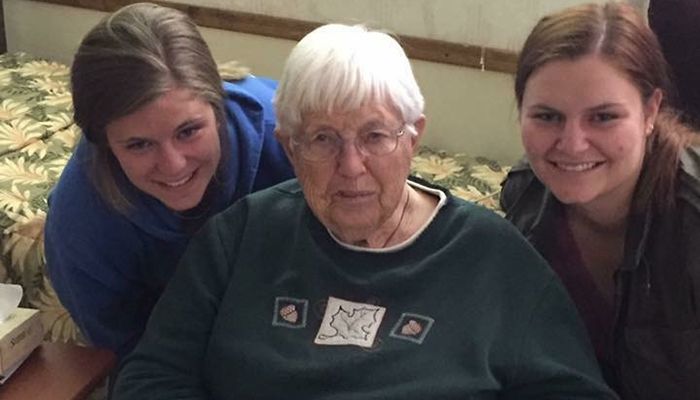 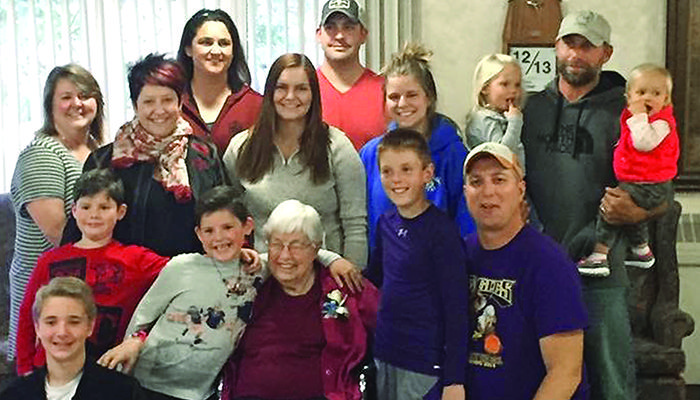 Caption: Virginia Striegel with her grandchildren.