USDA released their updated World Agriculture Supply and Demand Estimates on Wednesday, October 12, 2022. Leading up to the release, most of the focus was on potential changes to yield estimates.

Corn yields were dropped from 172.5 to 171.9 bushel per acre. Corn acres were left unchanged leading to a drop in forecast production. This supply reduction outweighed a smaller total use reduction, which caused ending stocks to be adjusted lower.

Soybean yields were also adjusted down, from 50.5 to 49.8 bushels per acre. Acres were also unchanged moving production lower. A downward adjustment to total use matched the supply cut, leaving ending stocks the same.

As mentioned above, corn yield estimates were adjusted down, resulting in a production cut of 49 million bushels, a decrease of less than 1% in total U.S. production compared to last month’s forecast. However, a reduction in last year’s ending stocks more than offsetting a slight increase in imports left supply down 172 million bushels, just over 1%.

Figure 1 and Figure 2 show changes to corn yield and production projections respectively, on a state-by-state basis. In Iowa, corn yield estimates were unchanged from last months forecast, remaining at 200 bushels per acre. Other members of the corn belt, most notably Illinois, saw yield estimates and production bumped up from the September estimate. This did not outweigh cuts to yields and total production in South Dakota, Nebraska, and Kansas, all states who battled drought this year. 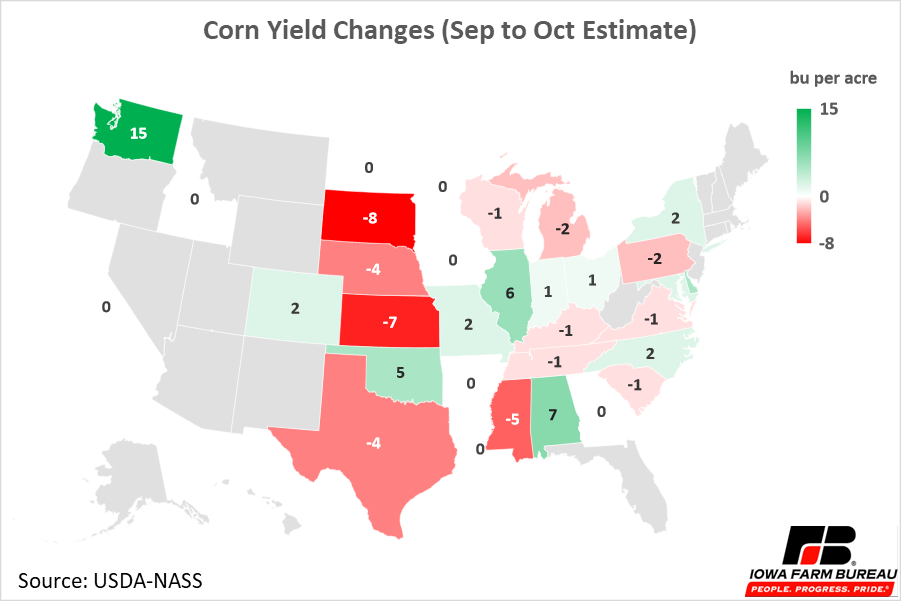 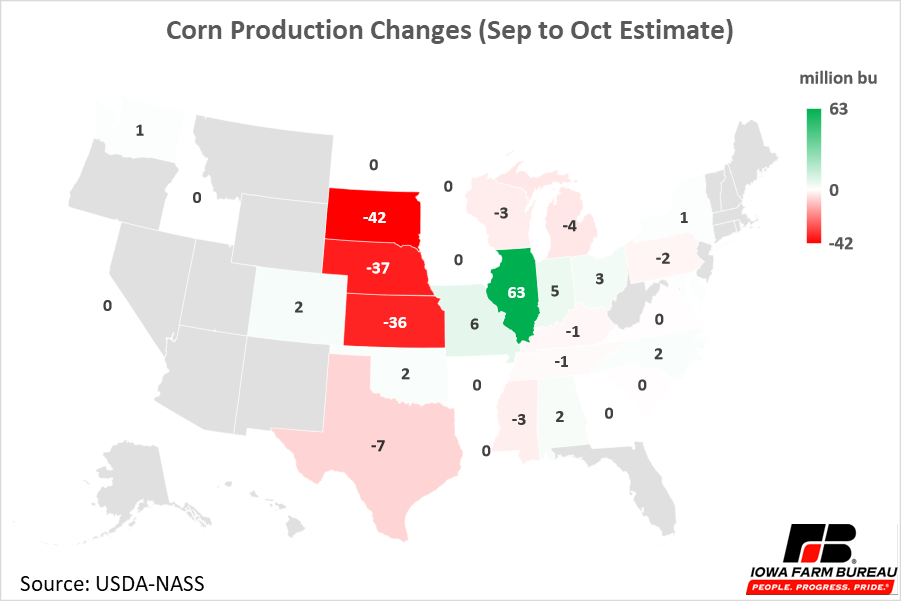 Ending stocks were again adjusted lower now forecast at 1,172 million bushels. This would be the lowest ending stocks since the 2012/13 marketing year. The corn balance sheet from the WASDE report is outlining supply and demand estimates is shown in Table 1. 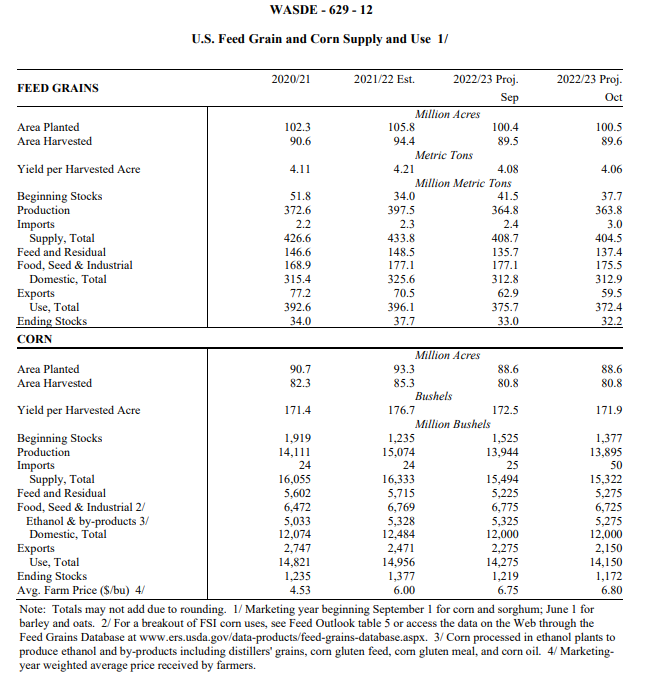 The USDA delivered a surprise by cutting soybean yields and production in their latest report. Production was cut 65 million bushels, or 1.5% compared to last month’s forecast. Though beginning stocks had been adjusted up, leaving total supply down 31 million bushels, or just under 1%.

Figure 3 and Figure 4 show changes to soybean yield and production projections respectively, on a state-by-state basis. In Iowa, soybean yield estimates were moved down 1 bushel per acre from last month’s forecast, down from 59 to 58 bushels per acre. This makes a big impact on production since Iowa has over 10 million acres. Most other large soybean producing states also had yields adjusted lower. Nebraska and Kansas had the largest yields and production cuts. 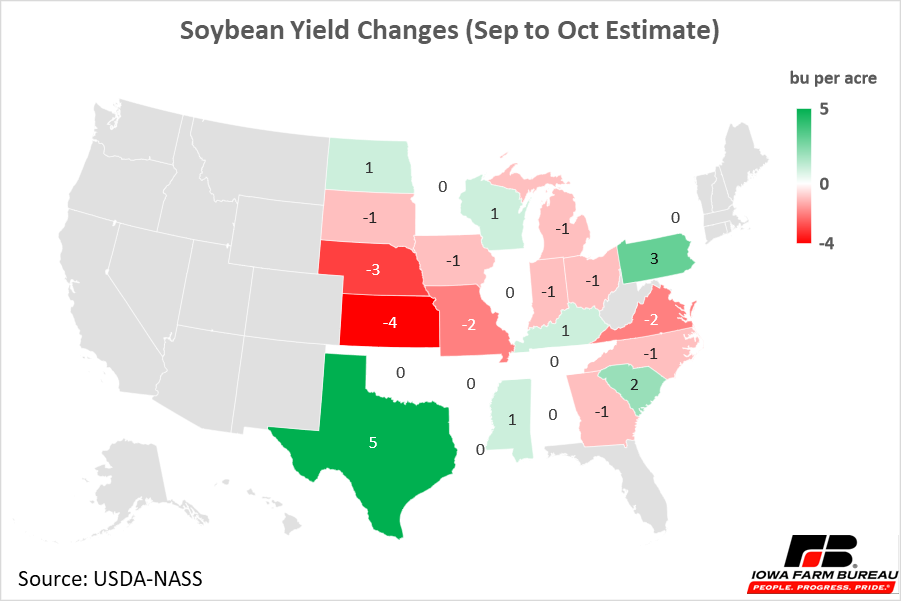 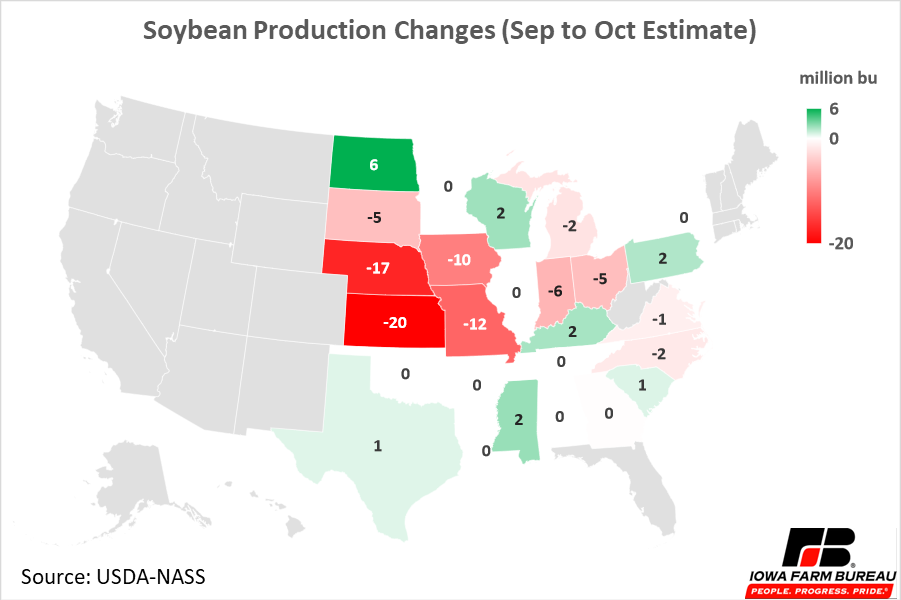 Total soybean use also was adjusted down 31 million bushels. A 10 million bushel increase to domestic crush was accompanied by a 1 million bushel decrease in residual use and a 40 million bushel cut to exports. Soybean exports face similar challenges to corn exports, including issues moving product down the Mississippi River and a strong dollar making U.S. goods less competitive on the world market.

Estimated ending stocks were left unchanged at 200 million bushels. This would continue to be the lowest ending stocks since the 2015/16 marketing year.  The soybean balance sheet from the WASDE report is outlining supply and demand estimates is shown in Table 2. 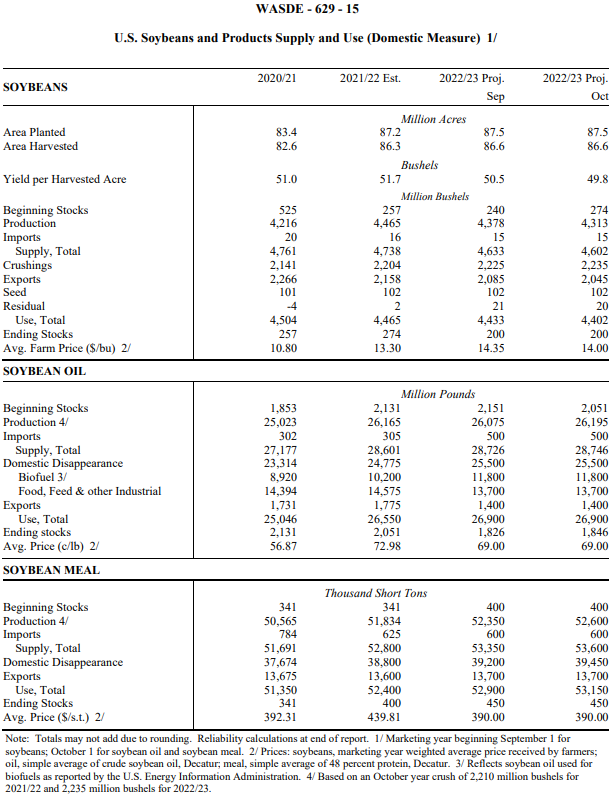