Farmers face challenging market prices in 2019 and diminished (or negative) returns due to costs of production that are not decreasing as rapidly as the projected Iowa crop values this year. This analysis examines example returns of Iowa corn and soybean crops using projected cash prices and costs of production.

Prices have dropped significantly for soybeans and corn – putting increased stress on farmers. Cash prices in this analysis were projected using May 9, 2019 CME contract settlement prices for November 2019 soybeans and December 2019 corn futures. Iowa Department of Agriculture and Land Stewardships (IDALS) statewide December corn and November soybean average basis levels from 2015-2018 were used to project a cash price from the futures contract levels for this analysis. Basis is the difference between the futures price and the local cash price for specific contracts and dates. IDALS reported a four-year average (2015-2018) of Iowa’s statewide November basis for cash soybean prices at 76-cents under futures, and the December basis for cash corn prices at 39-cents under futures.

Costs of production for corn and soybeans were obtained from Iowa State University Extension’s Estimated Costs of Crop Production in Iowa – 2019 report published in January. Impacts from changes in cost and price will likely cause your individual farm situation to be different than what is shown in the projected scenarios below.

This analysis projected negative returns under each of three production levels for soybeans provided the assumptions made. The high-yield scenario for soybeans shows the smallest loss of $1.26 per bushel and the low-yield scenario is projected with the most-negative return of $1.61 per bushel.  While individual results may vary, this reflects a challenging time for Iowa farmers. 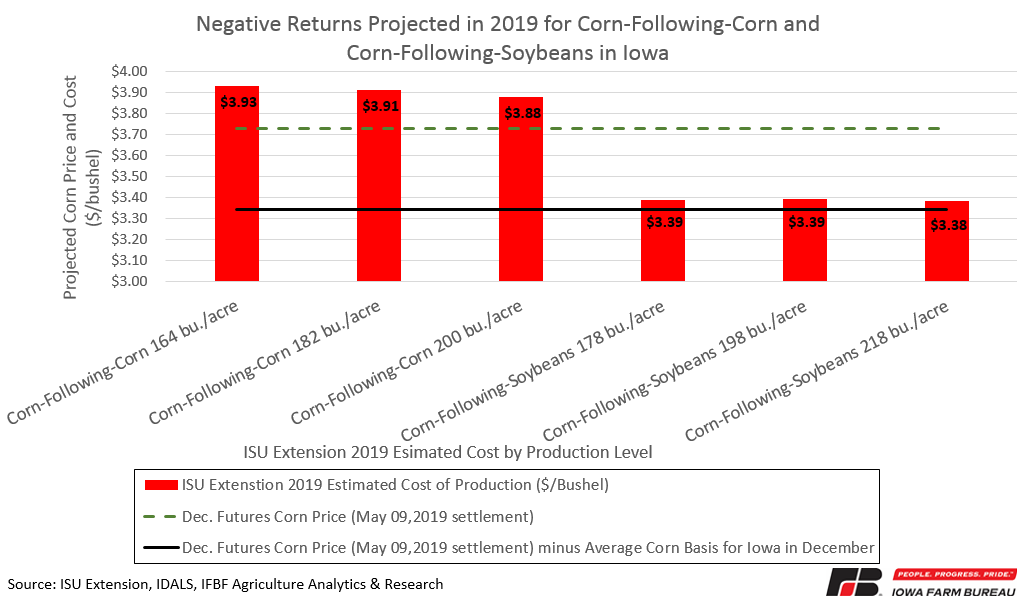 Published costs of production with current prices for corn and soybeans present a picture of the ongoing challenges facing Iowa farmers.

Delayed and prevented planting present additional risk and opportunities that need to be taken into consideration with the late planting period coming on June 1 for corn and June 16 for soybeans.

Changes in the assumed variables will result in different scenarios and outcomes. Expected prices and basis you face in your market options should be considered in an analysis specific to your farm. Basis levels from IDALS show a wide soybean basis across the state of Iowa. Monthly Iowa average soybean basis in March was the widest it has been since the beginning of the IDALS dataset in 2015.

A series of related articles on www.IowaFarmBureau.com present information and considerations for Iowa farmers for upcoming decisions.  The Iowa Farm Bureau 2019 Economic Summit on June 28 in Des Moines presents an opportunity to learn more about strategies and opportunities available informing farmers managing through challenging times.