In 2021 and 2022, high inflation throughout the U.S. has raised concern about demand destruction of agricultural commodities, especially for relatively high-priced foods like beef.  As the price of beef increases some people may buy less beef and more of other, relatively less expensive meat products like pork or chicken.

The price of beef, pork, and chicken are all up around 20% since January 2021.  Beef and pork prices increased earlier than chicken, but retail chicken prices eventually began increasing as well.  Beef is the most expensive of the three, so a 20% increase in the price of beef is a larger change in absolute dollars per pound than a 20% change in pork or chicken prices. 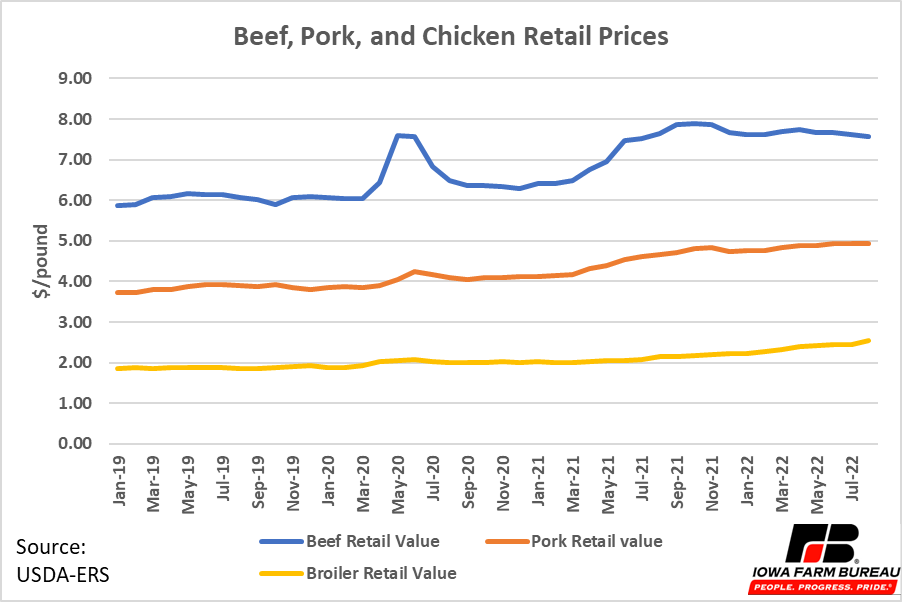 The most recent USDA forecasts have beef disappearance falling slightly starting in the fourth quarter of 2022, while pork and chicken remain relatively consistent. However, the decrease in per capita disappearance may have to do more with a lack of supply than reduced demand as beef production is expected to drop in the fourth quarter of 2022 and remain lower in 2023 as well. 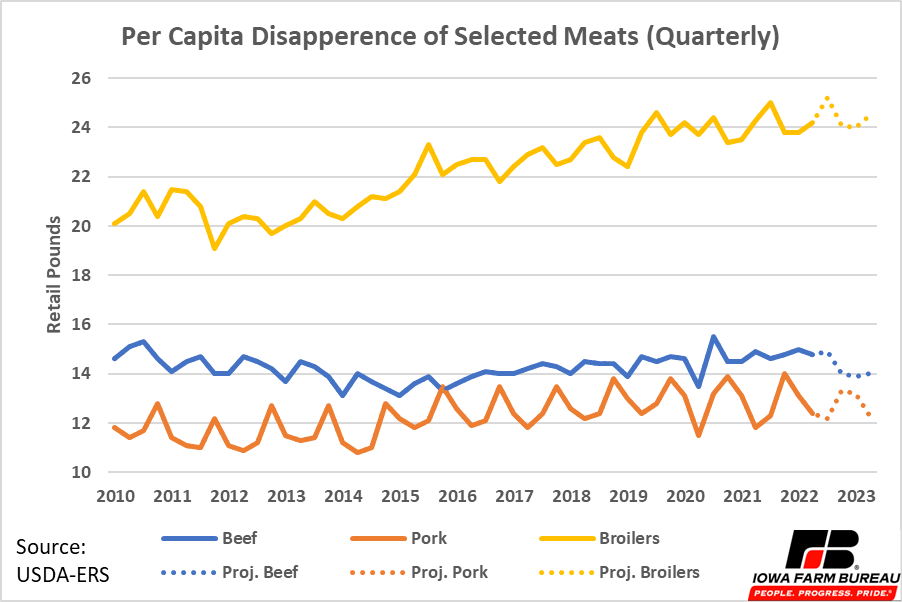 Despite concerns of decreased demand over the past year, beef demand appears to have remained strong.  Figure 3 plots the relationship between beef retail prices (adjusted for inflation) and per capita disappearance. The orange dots represent 2022, which uses actual data through August, and forecasts the remaining months of the year. Movement of the dots to the upper-right indicates an increase in demand; movement to the lower-left indicates a decrease in demand.

2021 and 2022 both show increased demand relative to 2019 and 2020 as both quantity and deflated price increased. Inflation does not appear to have effected beef demand in 2021 or 2022 relative to previous years. 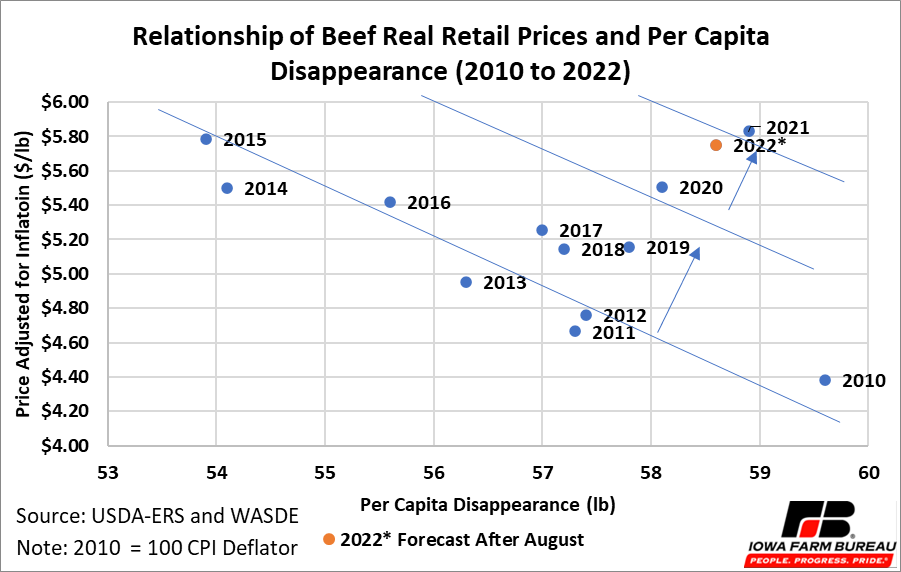 Figure 3. Relationship of Beef Real Retail Prices and Per Capita Disappearance (2010 to 2022) 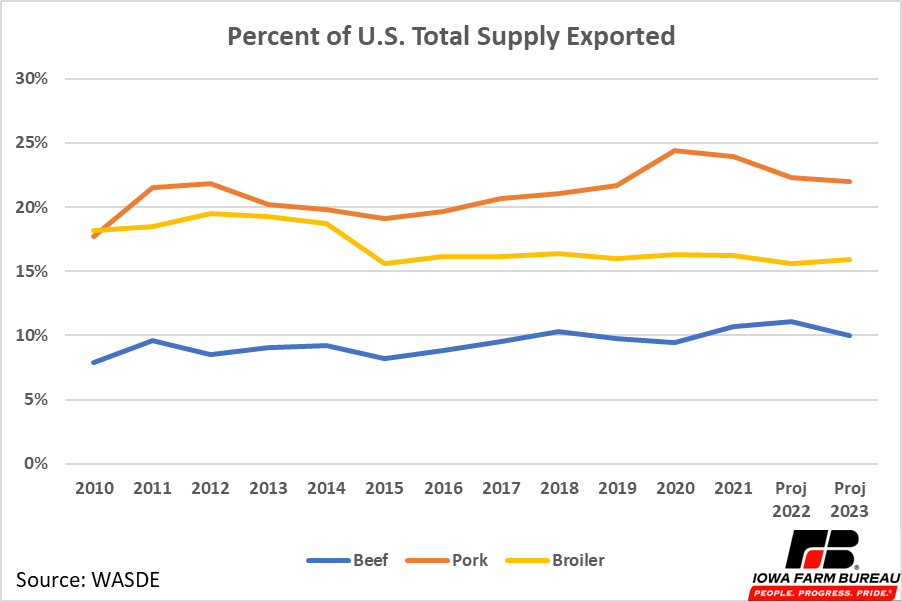 The larger reliance on exports of pork and chicken could make both susceptible to price decreases in the coming months.  To combat inflation, the Federal Reserve has begun raising interest rates.  This, along with other factors, has caused the value of the dollar to increase relative to most other currencies.  The Broad U.S. dollar Index, a measure of the strength of the dollar against major U.S. trade partners, is shown in Figure 5.  When the dollar increases U.S. exports become relatively more expensive for importing countries as their currencies buy less of a commodity priced in U.S. dollars.  If the dollar continues to gain ground on other major currencies, this will likely hurt demand for all agricultural products and will affect those most reliant on export demand the most.

Moves by other central banks could provide some downward pressure on the value of the dollar, and thereby offer some support to U.S. exports as well.  Other countries are also facing high inflation and have begun to raise interest rates on their currencies.  For example, The European Central Bank raised their interest rate on the Euro in early September and additional increases in their interest rate are expected in the future as well. If this continues this would put some downward pressure on the dollar and support foreign demand for U.S. meat. 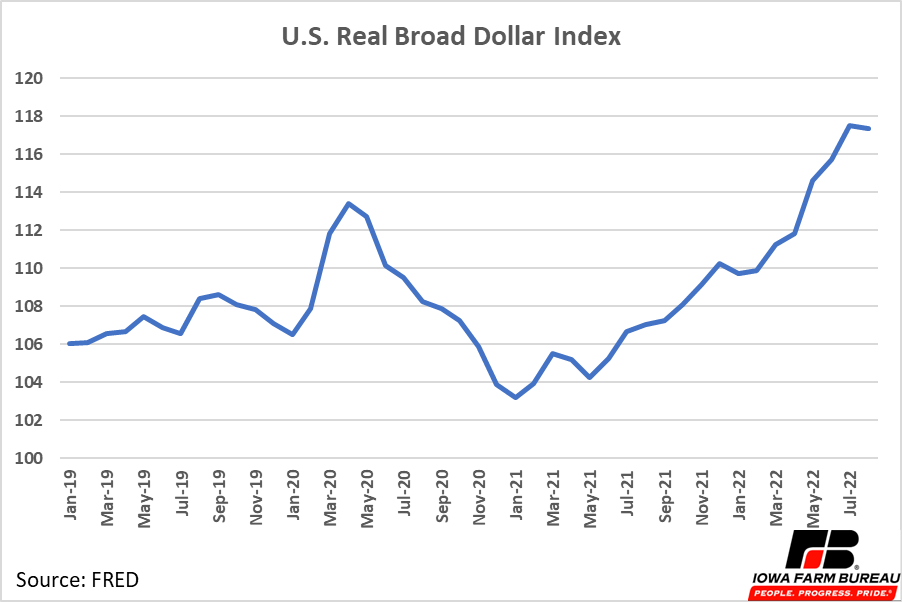 In short, concerns about beef demand falling due to inflation were largely dispelled as U.S. consumers kept buying beef even at higher retail prices.  Moving forward, foreign demand for all U.S. products is expected to drop at the dollar becomes stronger but will likely have a larger impact on commodities that are more reliant on exports, like pork and chicken.  Other countries have also begun to raise interest rate on their currencies which should put some downward pressure on the dollar’s value, but how central banks choose to set interest rates moving forward will have implications for the dollar’s strength and foreign meat demand.