When Brant Gilmore peeked out the door of his farm’s shop south of New Providence and couldn’t see the family home only a few feet away through the fog of wind and rain, he thought they could be in trouble.

“It was getting serious,” he said.

It was about 10:30 a.m. They all knew a storm was forecast, but had no idea it would turn into a monster wind event packing 100 mile-per-hour, straight-line winds that when finished left a trail of destruction to crops and buildings from central Iowa east to Cedar Rapids and beyond.

“About the middle of it, I could hear metal crunching and I realized we were losing stuff,” Brant said. “I told Dad (Daryl), we need to get under something or in the truck, because I didn’t know if the shop was going to go.”

That Aug. 10, 2020 event, labeled a derecho, demolished part of the Gilmore family farm’s grain-storage system, taking out six bins and two buildings, reducing it to a pile of dented and mangled steel.

When Brant and Daryl emerged after the 20-minute inland hurricane, they saw first-hand the ruination this kind of superstorm can leave behind.

“Utter destruction,” said Brant. “We lost about 150,000 bushels of storage.” One of the smaller bins ended up in a neighbor’s field three-quarters of a mile away. To this day, even two years later, they’re discovering bin flashings or parts of bin doors in area fields.

Brothers Daryl and Tom, Brant and his son, Cole, farm together on this fifth-generation Century Farm in northern Marshall County.

Daryl’s father put up the first grain bin in 1966, looking to get a start with on-farm storage to make harvest more efficient. Other bins followed, with the most recent one only a couple of years old. Today, it’s about 8 to 10 miles to the closest elevator, so being able to store on-farm during harvest has been a key over the years.

Said Daryl, “It gave us the ability to pick our own harvest hours. We could work into the evenings or weekends….being independent about marketing too.”

In total, the derecho caused roughly $500,000 in damages to the Gilmore farm. About two-thirds of the losses were covered by insurance.

“My dad and uncle spent 40 to 50 years making it what it was, and then to lose that capability, we basically almost started over,” said Brant.

Daryl’s first calls were to their insurance agent and then to the local GSI grain bin dealer, Sorem Sales Inc.

“We got on the list,” explained Brant. “We knew the destruction was widespread. We weren’t the first call…we were down on the list.”

They contacted an excavator operator to smash what remained of the bins, pick them up and load on trailers to be hauled away. Clean-up took some time.

The 2020 harvest was rough, they all admitted. “It was challenging harvesting corn that year,” said Brant.

What crops could be salvaged had to be hauled to town. Much of the corn was laid down and couldn’t be gathered.

Many fields throughout the central part of the state had to be disced under.

“It was kind of a short crop that year…we changed our plans quite a bit,” said Brant.

More so, the enormous challenge of rebuilding began to take shape, and it would take more than two years to come full circle.

“Basically we had to replace it all,” said Brant.

Daryl designed the project, focusing on efficiency and reliability.

The TopDry unit has an upper compartment for drying grain, and once dried, it’s dumped into a holding area below for storage. A smaller cooling/aeration fan captures the heat from the grain and pushes it upward to help dry the next load.

A newly installed grain leg — a conveyor system that moves incoming grain from a dump pit to the storage bins — now has the capacity of moving about 5,000 bushels per hour.

The electrical system was re-built as the derecho “had ripped it out of the ground,” said Brant.

Construction didn’t get under way until August 2021, more than a year after the storm, and it lasted a couple of months.

“There were supply chain issues and demand,” said Brant. “We started harvesting (in 2021) and still weren’t ready to go.”

New foundations were poured, and a crane was brought in to place the legs as the bins were installed. “In all, we replaced four bins, working around the three existing bins,” said Brant.

Happy with the result

The goal when designing the finished product was to look ahead, said Daryl.

“We wanted to put it back to where we had the same amount of storage, but to make it so we could grow into the future,” he said. “Lay it out so if we wanted to add more bins, it would work into the operation.”

Dale Sorem, owner of Sorem Sales, assisted with the design and installed the rebuilt system. He said the process was a little different than constructing a grain system on a new site.

“We had to locate the new bins and other equipment to fit the existing space, rather than starting with bare ground,” he said. “But the project went smoothly, and the Gilmores were great to work with.”

Brant said he’s already considering an additional bin for an existing foundation, but that can wait until they get a full harvest season under their belts this fall. 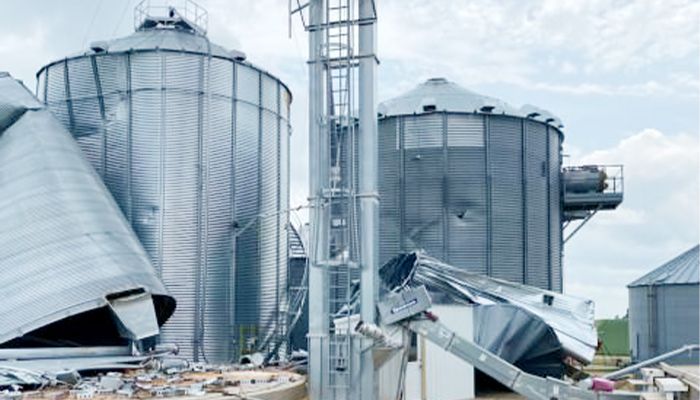