A flash of innovation

All too often, the first sign that an electric fence isn’t working is a phone call telling a farmer that his livestock are on the highway or in the neighbor’s cornfield.

But with a simple glance from his front porch, Bill Brown can rest assured that his electric fence is hot — keeping the horse on his family's acreage near Akron from wandering onto the busy highway running past their home.

The fence is equipped with devices invented by Brown call­ed Insulights, a plastic insulator that includes a flashing indicator to provide a visible warning when the fence goes down. The devices, which flash with the pulse of the fence, save farmers and ranchers significant time and effort required to manually check if electric fences are operational, says Brown, who is a semi-finalist in the American Farm Bureau’s 2021 Ag Innovation Challenge.

“They check it either once a week, if not once a day, and they have to get out of their truck to do it,” he says. “Now, checking the fence is as simple as looking down the fence line and seeing that it’s hot. That’s important, not only for everyday farmers, but also those retired and older that want to be able to be useful and work on the farm.”

Insulights work with all types of electric fence posts and wires, Brown notes. Unlike other flashing indicators that dangle on the fence and require a ground wire that can be disturbed by livestock, Insulights can be securely mounted on a post or hung independently from the wire.

The flashing lights are visible from 400 yards away. The blue insulator also serves as a visual deterrent to deer, which see colors on the blue wavelength, Brown points out.

Since launching Insulights two years ago, Brown has heard positive feedback from thousands of customers who appreciate the peace of mind of easily being able to see their fences are working.

“The best feedback we get is when we work trade shows, county fairs and state fairs where we get to talk to hundreds of farmers and ranchers a day,” says Brown, who operates Insulights with his wife, Sue, and daughter, Maggie Mae. “It takes away a little bit of that stress of wondering if the fence is down.”

Brown is working on adding smart technology to Insulights that will send a text message to the owner when power to the fence goes out. 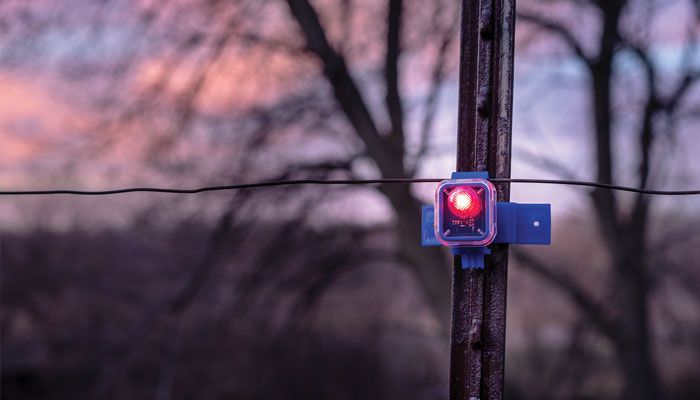 (Photo above: By flashing with the pulse of the electricity, Insulights help a livestock owner easily check if electric fences are operational. PHOTO CONTRIBUTED)

“That will be a big game changer for farmers and ranchers,” says Brown. “At least they’ll know the fence is down before the cattle do.”

The Insulights 2.0 smart insulator is currently being tested and is on track to be launched next year, Brown says.

Insulights aren’t the family’s first go-round as inventors. Several years ago, they launched a product called Tree Pans, a plastic mold that fits around the base of young trees to preserve moisture, suppress weeds and prevent mechanical damage.

Bill says the family’s in­­spiration to start their own business came after Maggie was diagnosed with a rare blood disease called Hereditary Angioedema (HAE) at the age of 3 that would make it hard for her to work full-time.

“I wanted to build a business where she could work when she wanted to, not when she had to,” he explains.

The Insulights plastic insulators are manufactured nearby at Den Hartog Industries in Hospers, and the circuit board for the flashing light component is made in Minnesota. The Brown family then works together to assemble and distribute the In­sulights, which are available at farm stores across the Midwest and online at Insulights.com.

As one of 10 finalists in the Ag Innovation Challenge, Brown will pitch his invention to a panel of judges during the American Farm Bureau annual convention in January 2021.

Each of the 10 semi-finalists were awarded $7,500, and four finalists will be chosen to receive an additional $7,500. A $35,000 grand prize is at stake for the team named as Farm Bureau Entrepreneur of the Year, and the People’s Choice winner will earn $5,000.

This is the seventh year of the AFBF challenge, the first national business competition focused exclusively on rural entrepreneurs to showcase ideas and business innovations in agriculture.

Teams from Iowa have been crowned as winners in four of the previous six AFBF contests — ScoutPro in 2015, AccuGrain in 2016, SwineTech in 2018 and FarmlandFinder in 2019.