Whether in a hog barn, the board room or the halls of Congress, new National Pork Producers Council (NPPC) President Jen Sorenson is equally equipped to excel.

“Guided by their many years of experience and diverse backgrounds, Jen (and other announced officers) will bring new insight and enthusiasm to NPPC and our producers,” said NPPC CEO Neil Dierks. “With the addition of our new board members, NPPC remains well positioned to advocate for the public policy interests of America’s pork producers.”

“It’s an honor, and I’m excited for this huge responsibility to work for the producers — to be a champion for rural America,” Sorenson said.

Sorenson noted that while she steps into this role in a challenging time for the pork industry, she's positive about the future.

While remaining positive about the future of the industry, Sorenson acknowledges that farmers and others in the supply chain have experienced trauma over the last year.

“When things were at their worst, I took a lot of comfort in sharing in the struggles of our producers, hearing from them and talking through it,” she said, getting emotional recalling the impact of the pandemic and processing plant closures. “Things were so bad, just so terrible. But there comes a point where we have to stop focusing on the black swan events. The fact is we made it through. We’ve learned a lot, and that’s a positive we can take away from this.”

On the trade front, Sorenson noted that the U.S. has been making big gains in Vietnam and the Philippines in recent years and those are markets she expects only to grow going forward.

She is also eager to show pork farmers are playing their part in increasing sustainability. “Pork’s sustainability story is amazing,” Sorenson said. “Year over year, we’ve shown how to do more with less. We’ve increased what can be produced by one sow and harvested from one market-weight hog. We’re driving production and constantly reducing our footprint. This is a story that needs to be told.”

Sorenson’s story starts out on a farm in Lee County. Her parents, Lee County Farm Bureau members Marvin and Sue Holtkamp, are contract hog growers. She learned a love for both farming and animal agriculture during those early years that has stuck with her ever since

“When you’re raised on a farm, it’s pretty easy to pick up a passion for agriculture,” Sorenson said. “I love it. Seeing farmers succeed is my passion, and I’ve worked with so many amazing people over the years who have pushed me forward in this passion.”

In her role with Iowa Select Farms, Sorenson spends much of her time at farms hearing from company staff on both their successes and their struggles. She also interacts with vendors up and down the supply chain, all of which combines to give her an extensive understanding of how the business of pork is accomplished.

“I can’t see myself doing anything else. Telling these stories really drives me forward,” Sorenson said.

She also serves on the Iowa Pork Producers Association (IPPA) board of directors, which means promoting pork and hog farms is a big part of her day-to-day life.

“That’s something I really enjoy and take pride in — collecting and sharing diverse perspectives within a very diverse industry,” Sorenson said.

She also oversees the Deb and Jeff Hansen Foundation, which funds efforts to “provide food to struggling Iowa families and children, shows gratitude to members of the Armed Forces and strengthens efforts to find a cure for childhood cancers while improving the quality of life for impacted families,” the organization’s website states. 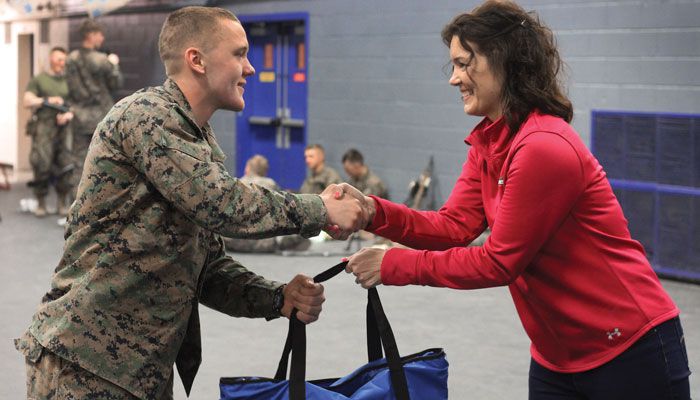 (Photo above: As part of her work at Iowa Select Farms, Jen Sorenson oversees the Deb and Jeff Hansen Foundation. It supports efforts to provide for Iowa families struggling with food insecurity and for members of the military. SUBMITTED PHOTO)

“All our foundation activities are geared toward rural communities and folks who live there,” Sorenson said. “It’s vital that we’re involved and giving back to the communities that support us.”