Information provided by the United States Geological Survey (USGS) shows that nitrogen loads at the Gulf of Mexico have declined significantly over time. The graph below shows the annual total nitrogen loads to the Gulf of Mexico from the Mississippi and Atchafalaya Rivers, and trends in the annual loads between the 1980-1996 baseline period identified by the Mississippi River/Gulf of Mexico Hypoxia Task Force and the most recent water year (currently 2021). The trend for nitrogen shows a 23% reduction since the baseline as of 2021. 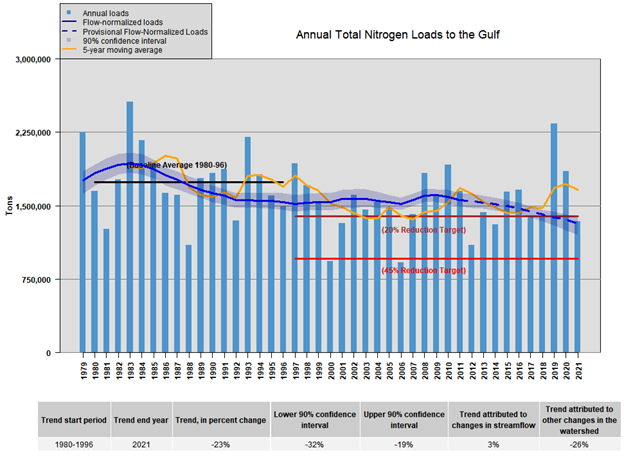 Trends in annual loads are estimated using a "flow-normalization" process designed to represent the load that would have reached the Gulf of Mexico if streamflow conditions were the same for all years in which water-quality conditions are monitored. In this way, the influence of weather-driven, year-to-year variability in streamflow is removed, allowing us to see the sustained changes in loading due to other factors such as farmer actions being taken to reduce nutrient losses in the Mississippi River watershed.