Mark Jackson of Mah­as­ka County was an early adoper of conservation practices to protect soil and water on his farm.

When it comes to conservation and improving water quality on his Mahaska County farm, Mark Jackson likes to say: “Actions speak louder than words, and results tell the tale.”
There’s certainly plenty of conservation action on Jackson’s farm near Rose Hill in Mahaska County. He was an early adopter of no-till for both corn and soybeans.
Each fall on his farm, a seed drill follows the combine planting a cereal rye cover crop. Jackson has also installed some 40,000 feet of grassed waterways, built 25,000 feet of terraces, planted buffer strips, built sediment basins and adopted other practices to reduce soil erosion and improve water quality.
Those actions, Jackson said, are pro­ducing positive results. He believes the farm’s soil health has improved, there’s more organic matter and water infiltrates into the soil much better after rains.
Importantly, the conservation pract­ices have reduced input costs and improved margins.
“Conservation is a big part of the economic scenario for us,” he said. “When we talk about sustainability, economics is right there beside the environment and the social re­sponsibility.”
Jackson’s dedication to con­serv­a­tion and water quality earned him the designation as the 2020 Iowa Conservation Farmer of the Year.
With the statewide conservation award, Jackson received the free use of a John Deere 6E Series Utility tractor for up to 12 months or 200 hours. The tractor award is sponsored statewide annually by Van Wall Equipment of Perry and by John Deere.
The award, sponsored by the Iowa Farm Bureau Federation and the Iowa Department of Agriculture and Land Stewardship, was presented recently by Iowa Agriculture Secretary Mike Naig at the Van Wall Equipment dealership in nearby Oskaloosa.
“With all that he does in conservation, and all of his work to pass that knowledge on to future generations, Mark is absolutely deserving of this award,” Naig said during the presentation.
Jackson’s son, Michael, president-elect of the county Farm Bureau, cited a history of soil and water stewardship on the family farm in nominating his father for the award. “Leaving a family farming legacy of continuous improvement for the next generation to build on is the cornerstone of his farming protocols,” Michael wrote in the nomination.
That legacy, Mark Jackson said, is a key reason to keep learning about and adopting conservation practices.
“My family has a long legacy in this county. I’m fifth generation, and my son, Michael, who farms with me, is the sixth. I also have a brother, Tom, that farms with us. So to me, farming is about a legacy of preserving land, sustainability and making that land better for the next generation.”
Jackson began implementing con­servation practices soon after he graduated from Iowa State University (ISU) in 1974 and he and his wife, JoAnn, began farming near the South Skunk River. “I have good, level fields, but I also have a lot of fields that are rolling. So my mind’s eye took me in the direction to try to conserve our soil,” he said.
That led Jackson, 66, to break with the tradition of clean tilling fields and to adopt a no-till system that uses crop residue to stabilize soil. He also began planting grass waterways, grassed headlands and stream buf­fers on his fields. Next came terraces, sediment basins, contouring and more, he said.
“We’ve always concentrated on the basics in conservation and kept it simple,” Jackson said.

The key, Jackson says, is doing the research and sticking with conservation practices over several years so a farmer can adapt them to his or her own farming operation. 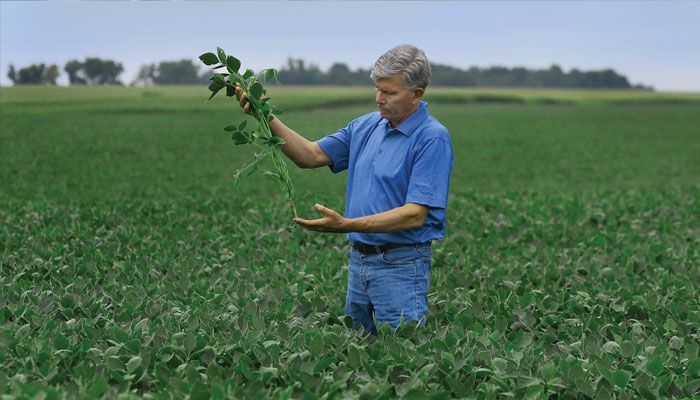 (Photo above: Mark Jackson, the 2020 Iowa Conservation Farmer of the Year, uses no-till farming practices and has installed buffer strips and grass waterways to help prevent soil erosion on his farm in Mahaska County.)

“Every farm is different, and every management style on a different farm is going to approach those challenges differently. We found things that fit in our management style and have worked for us.”
Nearly a decade ago, Jackson began planting cover crops, which ISU re­search shows can significantly reduce nutrient losses, build organic matter and improve soil health. Working with the Iowa Soybean Association’s (ISA) On-Farm Network and talking to other farmers with experience with cover crops, Jackson could see the value in the practice.
“We started slow, but we quickly saw the advantage of cover crops,” he said. “We haven’t seen any yield drag, and we are banking nutrients and conserving soil, so it’s very good for our long-term scenario.”
Jackson is encouraged that more and more Iowa farmers are adopting conservation practices, like cover crops and no till.
“It’s heading in a good direction, I think,” Jackson said. “I’m watching my neighbors start to turn their heads, slow down, back up, then drive into the driveway and start to ask questions. I think that’s where conservation really starts; it’s farmer to farmer.”