Sitting on a patio eating fresh barbecued pork and looking out at prime farmland.

Is this heaven? No, it’s Iowa during October Pork Month.

It’s all pretty much the same thing at Whatcha Smokin? BBQ + Brew on the edge of Luther.

Owned by Tanya Doyle and Steve Perlowski, Whatcha Smokin? opened in 2017 in an old gas station on Highway 17 and has built a solid reputation. It earned top honors in the Iowa Pork Producers Association Pulled Pork Madness contest this spring, claiming victory in a field of 125 nominations. Perlowski took interest in barbecue and smoked meats during his college days at Iowa State University and honed his craft eating and networking his way through Texas. “They have a very open and welcoming culture there,” says Perlowski. “They let you see their pits and answer your questions.”

He and Doyle teamed up on establishments in Ames over the past 10 years, and now Whatcha Smokin? BBQ + Brew features Texas-style BBQ.

“The place has a really unique atmosphere,” says Perlowski. A great stop for locals and travelers, it sits near state Highways 30 and 17 on the edge of Ledges State Park. “The day we opened, we were greeted by a line waiting at the door, and we knew we had a good thing. Those were the days.”

COVID changed things. First there was the four to six week period of take-out only, during which Perlowski says people were incredibly supporting, un­­derstanding and generous with their business and tips.

Then there was figuring out how to reopen according to COVID guidelines.

“We’ve had to change our business model and how we lay out our processes — all to keep staff and customers healthy,” says Perlowski.

The restaurant added additional seating outdoors, expanding the eatery’s capacity. The patio will be heated for fall and winter.

What hasn’t changed at Whatcha Smokin? BBQ + Brew is the food. The fresh cut, hand-breaded tenderloins are one of the biggest draws. “We cut the strap off, tenderize it, soak it in buttermilk and bread it with a seasoned cracker mix,” says Perlowski. They sell around 100 breaded tenderloins a day on an average weekend. “We put a lot of love into it.”

The pulled pork is dry-rubbed with five spices and cooked at 200 degrees for 12-14 hours “until it has good bark, good caramelization, with the smoke and spices working together.” It’s then wrapped in foil to keep it warm while the juices set. Plates are cut to order. “It’s all about attention to detail,” says Perlowski.

He says the Texas-style brisket is what people most often request, and are most likely to express disappointment about when it sells out.

Smoked with a simple salt and pepper rub, Perlowski cooks the whole packer brisket and separates the lean and fatty muscle according to order. 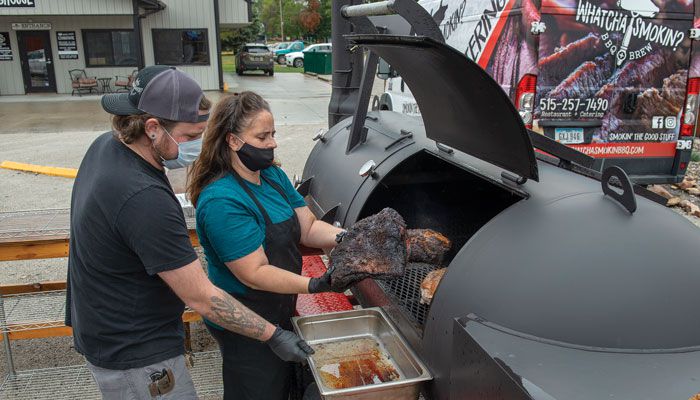 Smoking the brisket and pulled pork is a long process. When the day’s batch is gone, it’s gone.

Whatcha Smokin? BBQ + Brew has only Iowa craft beer on tap. “I’m a lover of craft beer, and we have some of the best in the country here,” says Perlowski. “We have good brewers, and I love that we can support and feature their creations.”