A mission for soil health

Turning over a shovelful of dirt in one of Mitchell Hora’s soybean fields re­­veals rich, black soil beneath a blanket of cornstalk and cover crop residue.

“In Iowa, we have some of the best soil in the world, and we need to treat it as such,” the seventh-generation farmer says.

Hora is on a mission to protect and improve soil health on his family’s Washington County farm, pushing beyond no-till and cover crops to explore new strategies like relay crops, 60-inch rows and interseeding cover crops between rows of young corn plants.

“We’re looking for the best combination of practices to bring all of these soil health efforts together,” Hora said at field day last week that drew more than 100 attendees and was viewed by hundreds more through live online streaming of the event.

Through his Continuum Ag soil health consulting company, Hora also works with farmers across the United States and eight other countries to collect data and implement management practices for improving their economic and environmental sustainability.

“Farmers are the innovators who are out there trying all this stuff (and) really pushing the needle,” said Hora, who serves on the Washington County Farm Bureau board of directors. “I’m trying to make sure that we are practicing what we preach on our own farm. We have to figure out as farmers how this soil health deal is going to make us money and how do we do this long term.”

Brian Hora, Mitchell’s dad, has used no-till practices and participated in research trials for many years. But he said their focus on soil health accelerated after Mitchell returned home to the farm after graduating from Iowa State University.

“Once he got going on the soil health movement and testing the soil health, we really started delving into it,” said Brian. “We’ve really gotten more focused in on anything that will improve soil health. We know that builds soil structure and better soil conservation.”

Continuum Ag conducts thousands of soil tests every year to quantify soil health improvements. Brian said sampling on their own farm showed a 0.25% gain in organic matter in a 160-acre field from last year to this year.

“This was on fields that have been no-till for quite a while and things were working, but they’re still jumping (in organic matter) so that’s good news,” he said.

One of their trials involves 60-inch row corn, where they shut off every third row of the planter to leave a skip row be­­tween every two rows of corn. By boosting plant populations to 50,000 plants per acre in the rows, they maintain an overall seeding rate of 34,000 plants per acre.

“Goal number one is to not set ourselves back (in yield),” Brian noted. They accomplished that last year as the 60-inch row corn yielded the same as 30-inch row corn, he reported.

A multi-species cover crop is seeded in the gap between the rows of the 60-inch corn to suppress weeds and sequester nutrients to feed future crops.

“We’re trying to stimulate more biology in the soil. My goal here is to feed my 2022 corn,” Mitchell Hora explained. 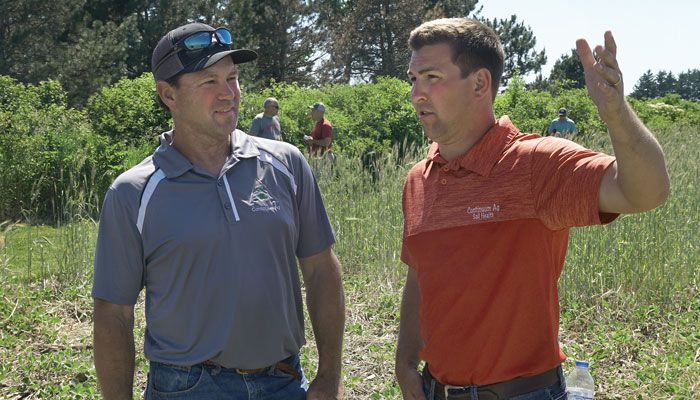 The Horas are also experimenting with relay cropping. They planted soybeans into a living rye cover crop in early May and plan to harvest the rye for seed in a few weeks. Then, they’ll take the soybeans to harvest this fall.

The delayed soybean growth may reduce yields by 10% to 20%, but the value gained from rye cover crop seed plus reduced herbicide costs will result in a net gain of about $40 per acre, Brian Hora said.

“It’s relaying the rye to the soybeans to get two crops in one year,” Mitchell said. “At the end of the day, the economics seem like they’re going to work out pretty well.”

“It’s a dynamic property. We can build it in three to four years,” he said. “The soil changes. It can get better and worse much faster than we thought.”

The key factors in building soil health are minimizing soil disturbance, maximizing soil cover, keeping a living root in the soil throughout the year and diversifying crop plantings, Peterson said.

“If we want the soil to be functioning at its maximum capacity, we need to keep that soil alive and keep it functioning,” he said.

“When the soil has no aggregate stability, it seals over, preventing the water from infiltrating,” Peterson explained. “Water can’t go through a solid. It has to go through voids in the soil.”