Young Farmers Are Stepping Up

It’s not a new trend. And it sometimes makes you wonder: who’s going to produce the food and fuel America and the world need in the future?

Behind the census numbers, though, are countless stories of young farmers who are eager to farm and are willing to take on the challenge.

Two of those young Iowa farmers are Randy Francois and Luke Tjelmeland. 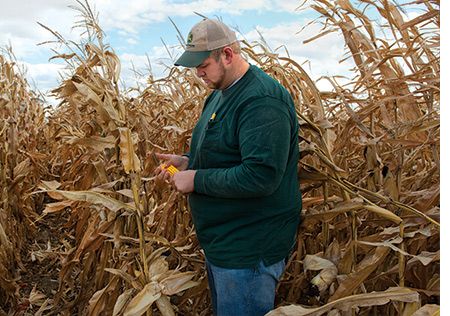 Francois, a 24-year-old grain farmer in Buchanan County, had the unique opportunity to farm his own acres.

Tjelmeland, 24, and his wife, Krista, recently welcomed neighbors and visitors to their farm to showcase their new pig barn in Story County.

Both Francois and Tjelmeland beamed with pride as they spoke of their involvement in farming at a young age. Both had worked alongside their parents and family to learn more about growing pigs and crops.

Though Tjelmeland and Francois faced their own share of challenges getting started, they looked at their challenges as learning opportunities.

Francois planned his first crop by learning about fertilizer, seeds, and the other management decisions that go along with growing corn.

Growing his own crops was different than helping his parents grow their corn and soybeans, he said. This time, he said, the decisions he made affected his corn crop and ultimately his bottom line. Francois said planting his own crop this year meant he had to understand the effects one decision had on his entire crop. Francois surrounded himself with knowledgeable people who helped him understand not only the financial side of the business, but also seed selection, fertilizer use, and grain storage and sales. While he couldn’t control the weather, he said he wanted to do everything he could to learn how to successfully grow his corn crop.

Tjelmeland, meanwhile, learned how to best determine a site for his pig barn. He and Krista worked with siting specialists and learned how some soil types are more suitable for a barn construction than others. Luke and Krista care about the environment, so they worked with additional specialists to ensure their barn was a safe distance from water sources. And they already have plans to add trees and bushes to the barn site. Luke and Krista communicated the plan for their pig barn to their neighbors and the county’s board of supervisors. They welcomed visitors onto their farm in the beginning stages to understand the placement of the barn. And when the barn was constructed, they welcomed guests to their barn before pigs arrived so they could explain the controls they put into place to protect the environment and their livestock.

There are plenty of people like Randy and Luke in Iowa and in the United States who are eager to be a part of the next generation in agriculture. And knowing those two, the future is in good hands.