According to United States Department of Agriculture (USDA) latest data, Mexico has been the leading market for U.S. pork muscle cut exports[1] during January to September 2022. The data indicates, U.S. pork exports to Mexico were up 15.5% to 615,133 Metric Ton (MT) (see Table 1). In addition, exports to South Korea expanded 2.5% to 126,629 MT during the first three quarters of 2022. In contrast, exports to other key markets were below the levels achieved during the same period last year. The largest decline in shipments corresponded to China. From January to September 2022, U.S. exports to China (137,074 MT) fell 60.8% from the volume exported during the same time last year (349,924 MT). Note that exports to China in September 2022 were the second largest of the year at 17,365 MT (up 4% from last September). According to USDA, Chinese Government price data for mid-September indicated higher prices for live pigs (up 74%), piglets (up 46%), and pork prices (up 54) than year-earlier prices, which may have resulted from a decline in China’s sow herd earlier this year in response to low producer returns. China is expected to experience some moderate expansion in foreign pork demand during the last months of this year and possible into the early months of next year.

Since there is no published data at the state level, Iowa’s pork exports to main destination during the first nine months of 2022 were estimated by multiplying the average state’s share of national hog production during the last three years (2019-2021) times national export data for the corresponding period and markets. 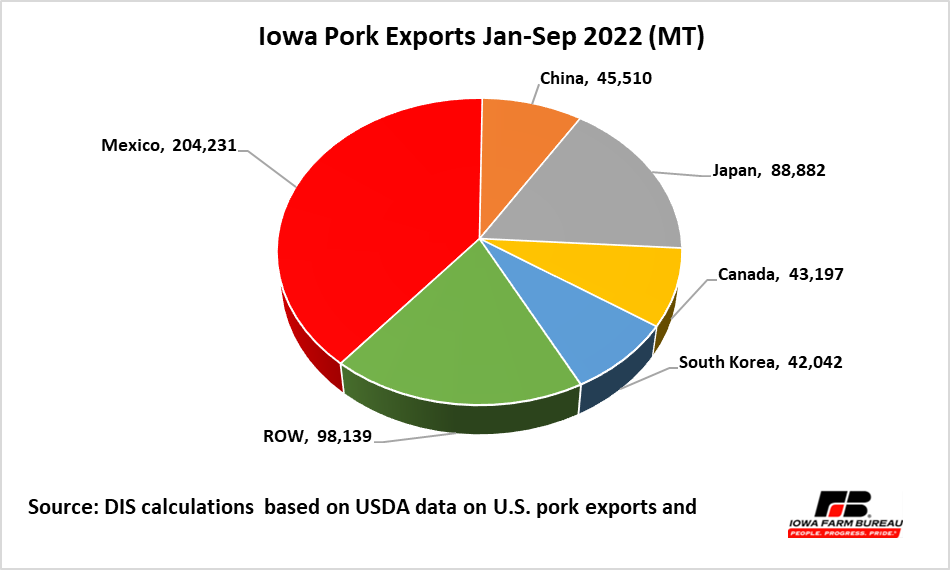