Randy Dreher gets around

Topics:
Share Tweet
Hundreds of newspapers and websites have carried a story (just before the election) by Sharon Cohen, of the Associated Press, asking a handful of people around the country if they are better off than they were four years later, the line Ronald Reagan made famous in a 1980 presidential debate.

Randy Dreher, Iowa Farm Bureau member who farms just outside of Audubon, was one of seven subjects profiled. Dreher noted his finances are not measured in four-year election cycles and said in the profile, “If you can’t make it in farming now, you’ll never make it in farming.” According to the article, Dreher “sees clouds in the larger economic picture,” mentioning his concern about debt, Social Security and Medicare.

Dreher and his wife, Crystal, and 2-year-old daughter, Katelyn, were included in a photo gallery with the stories. I’m not sure how to compare Dreher’s print exposure to “15 minutes of fame,” but after the article appeared in newspapers around the world, from the Washington Post to The Times of India, Dreher had his say.

Check out some of Randy’s harvest photos below. 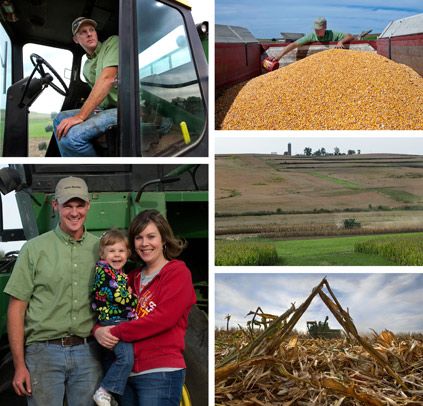 Written by Gary Fandel
Gary is the photographer for Iowa Farm Bureau.