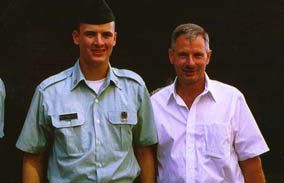 You’ve heard the Chinese proverb: give a man a fish and you feed him for a day; teach a man to fish and you feed him for a lifetime. Few take the axiom to heart like First Lieutenant Scott Rottinghaus and the Iowa National Guard’s 734th Agri-Business Development Team. This summer the unit will be deployed to Afghanistan, where they’ll work with local farmers to improve upon existing food growing practices.

“Everything we do in Afghanistan needs to be sustainable,” Scott told me after a recent day-long training session in Camp Dodge, just north of Des Moines. “[The Afghans] need to be able to continue any practices or techniques we implement after we leave.”

His team will build on the progress currently being made by a unit from California, by working with local leaders to determine their needs and solutions that fit their culture and technological capabilities, focusing specifically on the economical use of water for irrigation, increasing wheat yields and reducing spoilage.

Improving wheat yields is particularly important. Right now many Afghan wheat farms are yielding 19 bushels per acre, compared to 60-100 bushels per acre in the U.S. “If we can teach the Afghans to more wisely use water for irrigation and get more production off their land, not only will they be able to feed themselves, but they could produce extra for export to help feed others around the world,” Scott said.

But he knows that expecting immediate self sufficiency out of developing countries is like handing a beginning fisherman a rod in the middle of a desert. Not all countries have the arable land, stability (within the government and the economy), capital, infrastructure, technology or widespread expertise necessary to release the land’s full productive potential and feed their growing populations sustainably.

Don’t tell Scott the world doesn’t need (or isn’t asking for) our help. Eight hundred million people in the world are hungry, and the UN estimates that farmers will need to increase food production 70 percent by 2050 to feed population growth. That’s why he keeps his day job: raising hogs and grows corn and soybean with his dad and uncles back in eastern Iowa.

“We can help countries like Afghanistan reach their potential, but there’s still going to be a need for U.S. farmers to help feed the world sustainably,” Scott said.

It’s a significant challenge for U.S. farmers, but don’t bet against them. Over the last 60 years, farmers in this country have boosted food production by 262 percent, and they’ve reduced erosion by more than 40 percent over the past 25. I’ve known Scott for 20-plus years, long before he began farming or became “Lieutenant Rottinghaus.” Like many of the farmers I know, he’s competitive and he’s got passion for the work he does.

“I get to work the land and grow food to feed the world, and I’m a solider for the greatest country in the world,” he said. “This mission gives me the opportunity to combine those jobs. It will be an amazing experience, and I expect to learn a lot.”

As for the rest of us, let’s pray for a safe and successful mission and salute soldiers and farmers like Scott, working to ensure we have enough “fish” and “fishermen” to feed our growing world.


Written by Zach Bader
Zach is a Communications Specialist for Iowa Farm Bureau.