Growing tomatoes and a toddler 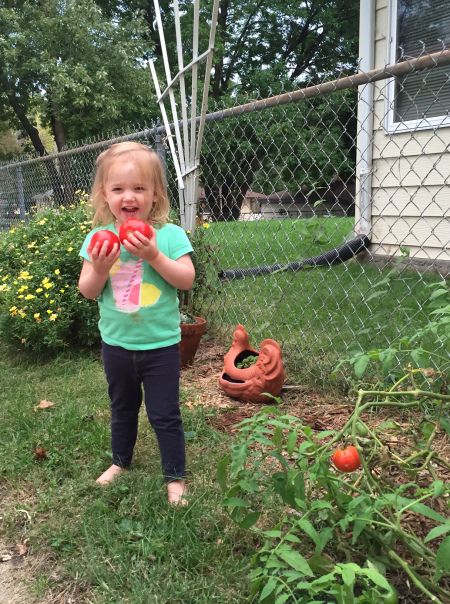 The calendar officially says it’s fall, combines are slowly starting to roll out into the fields, and football season has started; I think it’s safe to say autumn is upon us.

At our place, we’re probably 95 percent finished with harvest. No, I’m not talking about corn. Actually, we live in the city; the harvest I’m referring to is my daughter’s tomato patch. At our house, our Mother’s Day tradition is spending the afternoon planting the spring flowers. This year, we had a bare spot between a couple flowering bushes, so we decided to plant a tomato plant.

Just as farmers’ crops matured and grew over the summer months, so did our tomato plant, and my two-year old daughter. While watering the plants one hot May night, little Kennedy walked up, wide-eyed, and expressed interest in what I was doing. When yellow flowers emerged on the tomato plant a few weeks later, she showed even more interest. By the time cherry-sized green tomatoes appeared, she was amazed at the transformation and couldn’t get enough of helping Mom and Dad with the flowers, especially the new tomato plant, which she took ownership of.

I spent the summer months explaining to Kennedy that the fast-growing plants were actually not “apples,” like she thought, but would, in fact, one day grow to become big red tomatoes. She just said, “No,” in disbelief and smiled back, then turned her wide gaze back to the plants. Quite a few green ones got picked, but she finally learned the tomatoes aren’t ready to pick until they turn red.

As spring turned to summer, slowly, the color of the tomatoes changed from green, to orange, and finally to ripe and bright red. Just as farmers’ crops grew all summer throughout Iowa, so did my daughter. The tomatoes she first called “maties,” later became “matoes,” and now she’s really close to clearly pronouncing “tomato.” I’m sure next year it will roll off her tongue with ease, and a part of me will sigh when she reaches that milestone.

Little did I know when I planted the tomatoes, that one little plant could provide so much fun and entertainment for our family and a valuable lesson for our daughter. And it’ll be a priceless memory for me; watching the excitement in Kennedy’s eyes as we checked each night to see if any were ripe and ready to pick. The pride and happiness on her face as she showed off her produce and handed out extras to friends and family is something I’ll cherish forever.

Kennedy loved hovering over me as I washed and cut the tomato, and she especially loved eating the juicy ones. As a parent, you’re really never sure how many of the lessons you provide will be received, especially when you’re teaching a two-year-old! I do know Kennedy learned a little bit about responsibility, since we had to water our plant regularly to keep it flourishing. She hopefully picked up on food safety, since we washed each tomato before I cut it and fed it to her, and I know she felt tremendous joy and excitement, just like farmers, when it came time to harvest the crops they’ve nurtured and watched over all season.

This new Dad learned how valuable and rewarding it is to teach your children about plant lifecycles and growing your own food, and I realized whether you live on a farm or in the heart of the city, there are countless learning opportunities for kids to learn more about food production and food safety, while having a ton of fun. I am already looking forward to next year, when my eager little gardener will be able to learn and help me even more. But as for our 2015 ‘urban harvest,’ it’s hard to tell who had more fun in the garden; me, or my daughter!