Finding Agriculture in the Midst of 30 Million People

Even in a city of 30 million people, there’s still a place to find a bit of agriculture. And that’s what participants in Iowa Farm Bureau Federation’s (IFBF) International Market Study Tour did on their first day on the ground in Beijing. 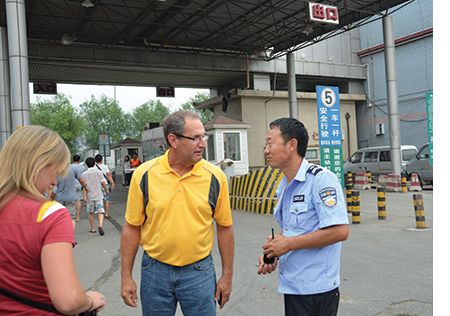 After a very long thirteen-and-a-half-hour flight from Detroit, the group headed to one of the largest produce markets in China’s sprawling capital. It was great to see something fresh, after navigating Beijing’s legendary traffic and driving through its infamous smog.

Along the way, the Iowans also got a lesson in quick foot movement, after learning that drivers in Beijing seldom brake for pedestrians in crosswalks.

At the produce market, where foods were brought in from the countryside for distribution in the city, some of the fruits and vegetables looked familiar to the Iowans: peppers, eggplant and sweetcorn. But others looked very unfamiliar, such as string beans that grew about two feet long and bitter melon, something that looked like a cucumber that has been grown by an alien.

It made for any interesting visit.

Also interesting was the security guard who followed the Iowa farmers all around the market, and even tried to get some to try a hot pepper. Our guide, Sherry Guan, explained that this market seldom attracts western visitors and the guard probably wanted to make sure the Iowans were treated well.

On to more adventures in China!