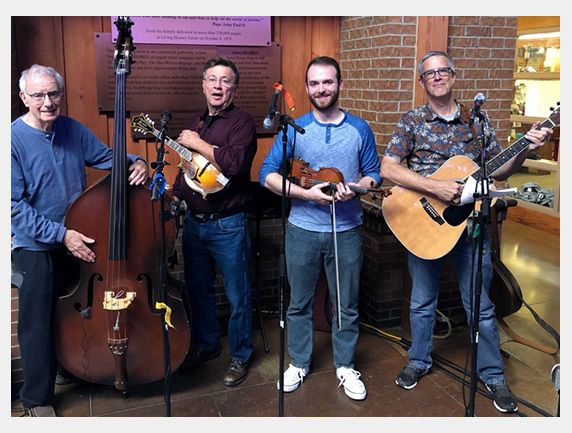 Tuesday evening, December 7
Hoot it up with barn dance music from the mighty Barn Owl Band! The nationally recognized Owls are powered by fiddle, guitar, mandolin, bouzouki, and upright bass and give new wing to the exciting sound of the traditional American string band. It's good old-fashioned, toe-tapping, foot-stomping entertainment brought up to date with fresh renditions of time-honored tunes and songs, as well as new compositions that add to the tradition.

Since its inception in 1991, the band's mainstay gig has been playing for a monthly barn dance for the Central Iowa Barn Dance Association in Ames, Iowa. The Owls have also been sighted at coffee houses, concert stages, farmer's markets, weddings, celebrations, Irish ceili dances, TV shows, sound tracks, RAGBRAI (the [Des Moines] Register's Annual Great Bike Ride Across Iowa), or wherever plenty of fresh mouse is on offer. The barn owl (Tyto alba) is known for sticking to its home territory, though, and like its namesake, the Barn Owl Band tends to remain home in central Iowa for the majority of its performances.

In 2000, the Owls released their first CD, Dance Owl Night. This album captured some of the best medleys that the Owls have arranged for dances, plus a couple of vocal songs, and included several tunes that were composed by members of the band.

On February 23, 2002, the Barn Owl Band was featured on the National Public Radio program A Prairie Home Companion, broadcast live from C.Y. Stephens Auditorium in Ames. The weekly radio program is broadcast on more than 500 stations worldwide and has over 3 million listeners.

It was shortly after the PHC show that the Barn Owls performed their first Spring Concert in the MonteBello Bed and Breakfast Inn in Ames. Released in December, 2003, Barn Owls Live, was recorded during the second such concert on April 12, 2003 at the Ames City Auditorium.

The Barn Owl Band's third CD, Cloud Forest, including a blend of live and studio tracks, was released in September, 2006. And CD number 4 is on the drawing board! Stay tuned, Owls fans!